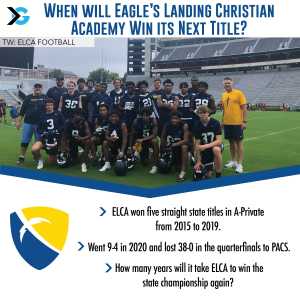 ELCA established one of Georgia’s greatest football dynasties from 2012 onwards. In 2015, the Chargers won their third-ever state title and rattled off a streak of four-consecutive state titles in A-Private. Last season was definitely an anomaly for them, as the Chargers went 9-4, losing to Blessed Trinity, Crisp County, Pierce County and Prince Avenue Christian.

Will 2021 be the year that the Chargers return to their annual dominance?