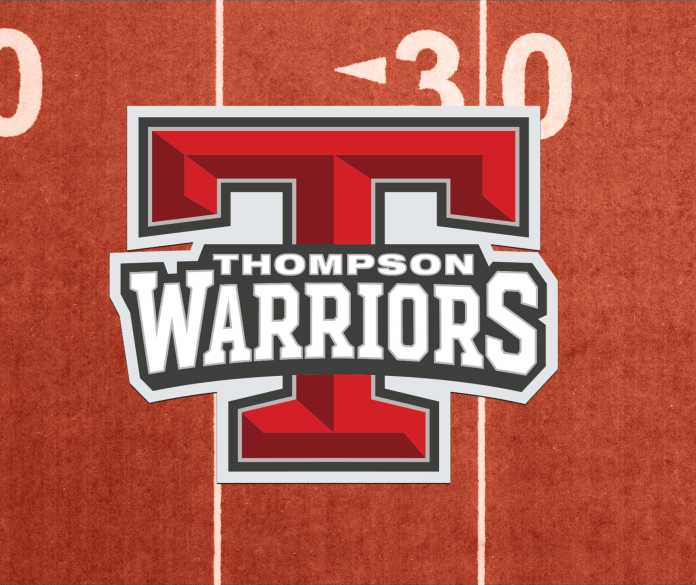 Three-time Class 7A defending state champion Thompson enters the 2022 season again among the state’s top teams. What does the 2022 season have in store for the Thompson football team in 2022 as they chase their fourth consecutive state title?

Arguably the biggest losses for the Warriors come on the offensive side of the ball, headlined by the QB/WR duo of Conner Harrell and Ryan Peppins. The duo connected for a touchdown upwards of 20 times a year ago, and Harrell was one of the state’s top quarterbacks. He posted back-to-back 40+ touchdown seasons in 2020-21, while Peppins earned 2021 Alabama Mr. Football honors.

Elsewhere on the Warriors’ offense, Jaylen Ward was Thompson’s second-leading receiver with 11 touchdowns, while versatile running back Justin Pegues, who ranked third for the Warriors in receiving, is a key loss in both the run and pass game. A majority of Thompson’s production on the ground from last season also will have to be replaced – that group includes Pegues, Brandon Franklin, Ahmari Bolden, and Lione Cook.

Defensively, the Warriors’ biggest loss is that of five-star edge rusher Jeremiah Alexander, the state’s No. 1 overall player in the 2022 class. Among the team leaders in tackles at 93, Alexander also collected 29 TFL and 10 sacks, and is a significant loss for the Warriors’ defensive front, as is Kaleb Thompson.

When it comes to the returning talent for Thompson in 2022, the defense will again be a massive strength for the Warriors. The group is led by the five-star duo of defensive back Tony Mitchell and defensive lineman Peter Woods. Mitchell enters the 2022 season as arguably the top cornerback in the state, while Woods, who collected 92 tackles, 26 TFL, and 11 sacks last season, ranks among the top defensive linemen in Alabama.

Linebacker Seth Hampton will also return on defense alongside Jake Ivie to compose one of the top linebacker duos in Class 7A, while safety Anquon Fegans, one of the state’s top 2025 players, comes off an exciting freshman campaign that included 50 tackles. Elijah Williams will again be a key player along the Warriors’ defensive line, while Kelby Taylor, Tyler Hicks, and Kaleb Harris are also names to know elsewhere on the 2022 Thompson defense.

On offense, you could argue that the Warriors’ biggest returning name comes along the offensive line in Stanton Ramil, a four-star prospect who is one of the top players in the state at the position. Thompson’s other key name to know is that of rising junior quarterback Zach Sims, who takes over as the starter for the Warriors after impressing late last season with six touchdowns in three games.

Joining Sims in the backfield will be another rising junior in running back AJ Green, who rushed for six touchdowns a year ago, while De’Shawn Murray and Michael Dujon could also see time. At receiver, Thompson will be counting on a few different names to step into bigger roles to replace lost production from a year ago, with Deuce Oliver, Bo Jones, and Kolby Hearn among the names to know.

Thompson should easily be one of the top teams in the state in 2022, as well as the favorite entering the year in Class 7A. The first two games of the season will certainly be a test for the Warriors as Thompson will face two out-of-state teams, the first of which comes against defending Georgia 6A state champion Buford at a neutral site. That game will garner national attention.

Expect Thompson, the top team in a loaded 7A-Region 3, to be in the mix atop Class 7A late in the season, and for the Warriors to play for a state championship again. Could the Warriors potentially win their fourth straight state title in 2022? It’s certainly a possibility, and based on recent history, it’s hard to bet against Thompson in any matchup come playoff time.

Thompson will win at least 11 games and play for a state championship in 2022.

Want to get the latest news and opinions in the Alabama high school sports world before anyone else? Subscribe to our email newsletter!