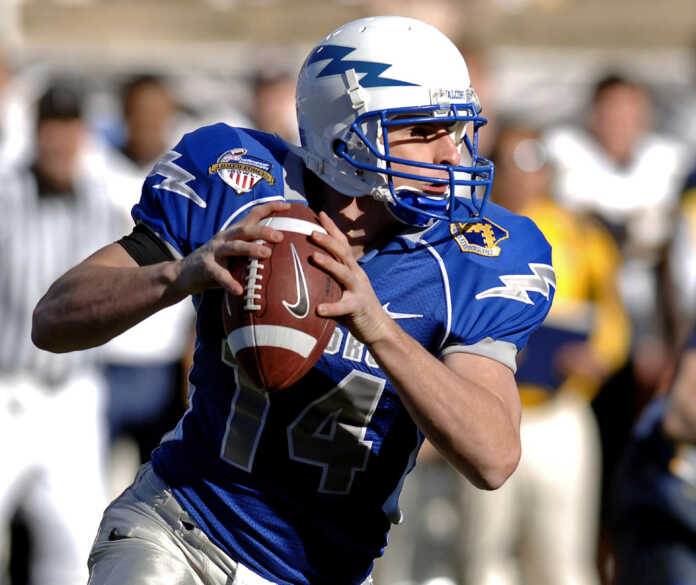 After releasing our way-too-early Top 20 power rankings for the 2023 Florida high school football season, we now take a look at some of the top individual names in the state. Here are the Top 10 quarterbacks set to return in Florida next fall.

Based on the impact the junior had on Chaminade-Madonna’s run to the Class 1M state title last season, it’s hard to argue against Bailey, a three-star prospect in the 2024 class, as No. 1 among quarterbacks entering the 2023 Florida high school season. In 13 games he completed 70.2% of his passes for 3,355 yards and a 45:5 TD:INT ratio, while also rushing for 215 yards and a pair of scores on 24 attempts.

Coming off a strong first season at IMG Academy after transferring from out-of-state, Bradford, a four-star prospect in the 2024 class, comes in at No. 2. In nine games for one of the state’s top teams, Bradford completed 78% of his passes for 1,071 yards and a 19:0 TD:INT ratio, while also rushing for 53 yards and 2 touchdowns on 27 attempts.

A player who reclassified from the 2025 to 2024 class last fall, Hurley comes in at No. 3 as he enters his senior season for one of Class 1M’s top teams, Trinity Christian. The four-star LSU commit completed 53.3% of his passes in nine games for the Conquerors in 2022, translating to 1,513 yards and a 17:5 TD:INT ratio.

Arguably the best of Florida high school quarterbacks in the 2025 class, Simmons enters 2023 as the top player at the position in Class 1R. A four-star prospect at Pahokee, Simmons threw for a 67.4 CMP% with 3,161 yards and a 24:9 TD:INT ratio in 12 games, while also rushing for 92 yards and 3 touchdowns on 30 attempts.

Coming in at the No. 5 spot is Posse, who is a four-star Auburn commit in the 2024 class. Posse recently spent the 2022 season at Mater Academy Charter, while also having previously played at Monsignor Pace in 2021 as a sophomore.

Coming off back-to-back 3,000+ yard passing seasons, Pickles might be an early favorite to lead Florida high school football in passing in 2023 as a senior. In 12 games for North Florida Christian last fall, Pickles completed 67.5% of his passes for 3,382 yards and a 39:10 TD:INT ratio, while also rushing for 620 yards and 9 touchdowns on 94 attempts.

Coming in at No. 7 is another prominent passer in Hairston, a name who will likely continue to become more-and-more known as the 2023 season approaches. In 12 games at Monarch last season, Hairston completed 67.9% of his passes for 3,217 yards with a 32:6 TD:INT ratio, along with rushing for 347 yards and 7 touchdowns on 53 attempts.

The aforementioned Hurley is not the only prominent name from the Jacksonville area who returns in 2023; Resar is also back at Bishop Kenny. A four-star Iowa commit in the 2024 class, Resar was a true dual-threat option for the Crusaders by throwing for a 59.3 CMP% with 1,266 yards and a 13:5 TD:INT ratio in nine games, while also rushing for 476 yards and 10 touchdowns on 50 attempts.

A three-star SMU commit in the 2024 class, Aronson rounds out the list of top 2023 Florida high school quarterbacks after a strong first season at Vero Beach. In nine games with the Indians, Aronson completed 66.1% of his passes for 1,683 yards and a 21:7 TD:INT ratio, while also rushing for 100 yards and 3 more scores on 46 attempts.