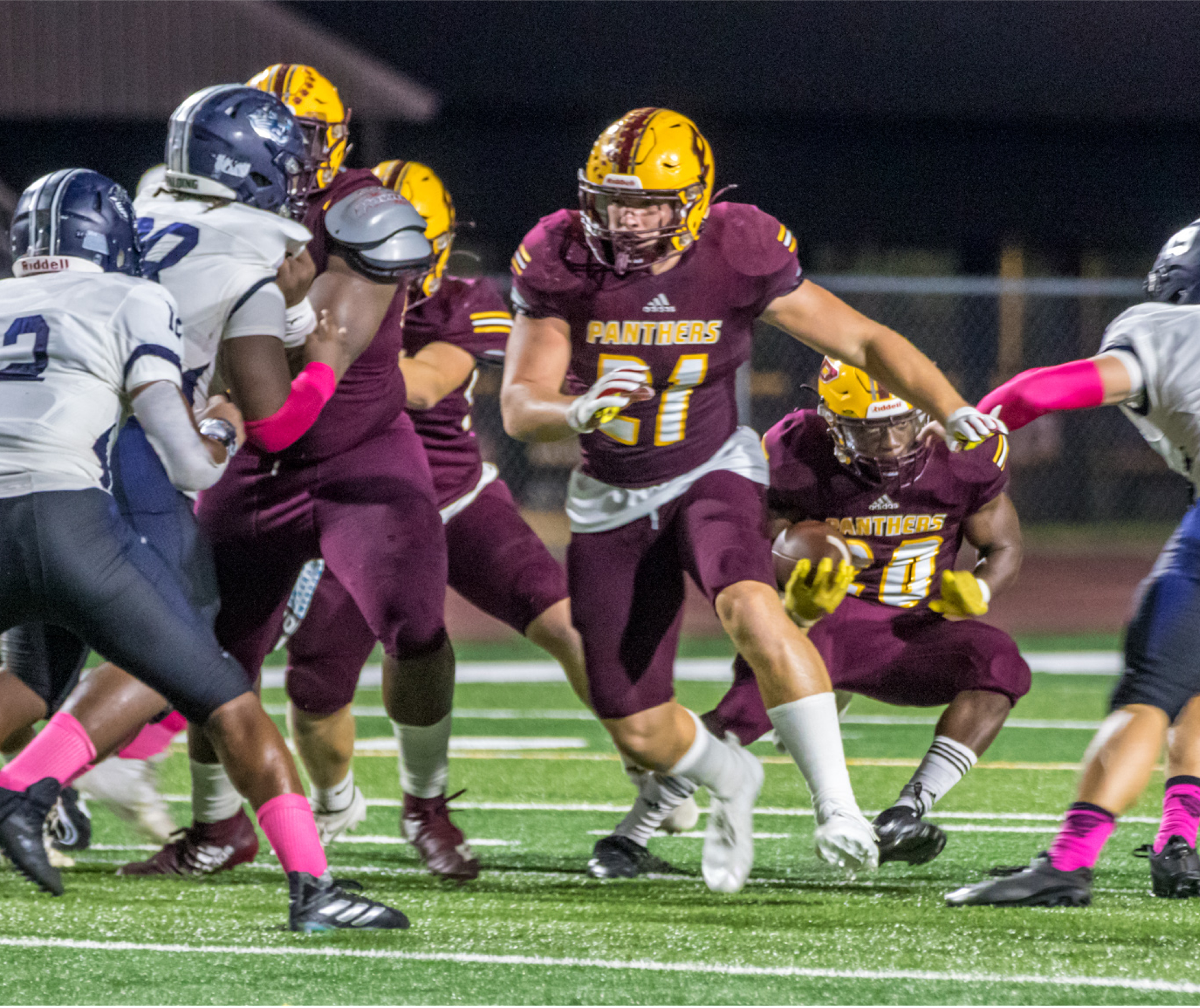 We tell you everything you need to know about the 2022 Perry football team in this preview. We take a look at roster changes and what fans can expect from the team this season.

The biggest loss for Head Coach Kevin Smith and the Panthers is Daequan Wright, who fans will see suiting up on fall Saturdays for the Virginia Tech Hokies. The three-star, multi-purpose Wright had 144 catches with 2,208 career receiving yards and 23 TDs from his TE position while at Perry. He also handled kickoffs, and was very effective as the Panthers’ punter, averaging 39.9 yards per punt.

Brant Gibson was also a TE, but his major skill set was blocking, and he also was an excellent DE. Gibsonfinished his career with 63 tackles, including five TFL. Strong safety Price Massey has graduated, and his 190 tackles will be missed. LB/WR Curtis Head leaves behind a solid career at Perry, where he hauled in 84 career catches for 1,223 yards and 10 TDs. He also was a force on defense and special teams, with 199 kickoff return yards, 70 tackles, five sacks, and two INT.

Other Panthers who will be missed are DB Casson Clark and OL Donovan Haslam. Head and Gibson are headed to Georgia Military College to continue their football careers, Haslam signed with Austin Peay, and Clark will attend Gardner Webb.

Returning this season will be heavily recruited WR/KR Dakari Anderson, who has 72 catches for 1,047 yards receiving and 10 TDs while at Perry. He also has blocked two punts and has a blocked FG well.

Starting quarterback Armar Gordon Jr. will give the Perry offense a big boost with his return in 2022. He has 3,065 passing yards and 33 TDs to his credit. An accurate and efficient passer, Gordon has completed 64% of his passes as the Panther starter.

Senior safety/kick returner Camerin Marshall returns to the Perry squad this season and brings his ball hawking skills with him. So far, Marshall has 219 career tackles, including one sack, and he has three fumble recoveries (one for a TD), four interceptions, (including a pick-six), and 238 kickoff return yards.

Free safety Caleb Wilson is another opportunistic Panther, having racked up 83 tackles, with two fumble recoveries and an INT. Smith says Trey Wright will see more action on defense and offense this year after making the most of his time as a role player last season. He came up with three INT in 2021 in a part-time role for Perry. Smith plans to use him at WR also. Ahmad Lee, who Smith describes as a “very physical” player, will get the start at safety this year.

2021 was the best season in the history of Perry High football, with 11 wins, a second consecutive region championship, and a second straight trip to the state quarterfinals. Coach Smith has certainly raised the bar of expectations for Panthers football heading into the 2022 season.

“We are a new team with higher expectations, and we are taking the “watering the root” approach in getting ready for the 2022 season,” Smith said. He said the players are connecting like never before, and you can see the change in culture surrounding the Perry football program under Smith. There is no reason to think this spirited uprising of Panthers football will end anytime soon under Smith.

Look for another solid season in Perry. 11-2 overall record.