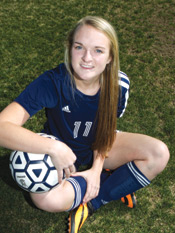 Excellent academics and superb athletic skills are a lethal combination. Those gifted with such often have the inside track to a world of opportunity about which other students can only dream. Kaylee Shaver, center midfielder with the Thomas County Central Lady Yellow Jackets soccer team and potential Class of 2014 valedictorian, is one such student-athlete. A gifted soccer player and student, Shaver has academic and athletic offers from colleges throughout the country. What will she ultimately do? It’s a question she is still pondering.

Everything is a competition to Shaver. Her competitive fire fuels her to always do her best, no matter the activity. “Her desire to excel in everything she does is second to none. She wants to be the best and she definitely makes her daddy proud. I have no complaints at all with her,” says her father, Thomas County Central head football coach Bill Shaver. 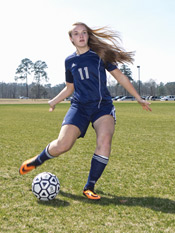 That desire to be the best is what made her Thomas County’s Female Athlete of the Year (former In the Game Player Spotlight Adam Choice was named Male Athlete of the Year). It’s what made her an All-Region soccer player. And it’s what has made her – according to the most recent class rankings – number-one in her class. “Last year, I was first in our class. We haven’t seen any rankings this year. But I’ve always wanted to do my best in the classroom. Academics is a competition to me just like soccer is. I want to do my best,” she says.

She is a self-motivated student who has always prioritized her grades. Nobody ever had to tell her to do her best. Nobody has ever sat down with her and given her a lecture about the importance of making good grades. From Shaver’s first day of school, she has been one of the best students in the class. Even with the rigors of playing year ‘round soccer and taking the toughest courses Thomas County Central offers, that hasn’t changed one bit. “I don’t sit around much. Television isn’t a priority for me. I go to school and practice, then I come home and do homework. I concentrate on what’s important. I like being involved with different activities. There are a lot of late-night study sessions but you do what you have to do,” she says. 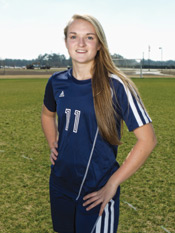 That “get it done at all costs” attitude helped Thomas County Central win a region championship in soccer last season. The girls won the title by simply refusing to give up. The Lady Yellow Jackets weren’t necessarily the most talented team in the region but they refused to lose. They believed they could play with anybody and that stubborn resolve to win helped them outlast more gifted opponents. In the region championship game against Northside-Columbus, for example, the Lady Yellow Jackets found themselves outgunned and overmatched. Northside had more talent and resources. But somebody forgot to tell Thomas County Central that meant the Lady Yellow Jackets were supposed to lose. It was a close game but Thomas County Central won, 3-2. Shaver had two assists in the game. “We probably should have lost that game. We weren’t as talented as they were. But we played well as a team. We were a very close team last year,” she says.

Shaver is weighing her options for the future as her senior season draws to a close. Very soon, possibly before this edition is published, she will learn the class rankings. She will also have to make a decision regarding where she will attend college. She has soccer offers on the table, including one from Carson-Newman. Shaver would love to play for Carson-Newman but the school doesn’t offer her major of choice, athletic training. She would have to major in exercise science there. She is deciding between a soccer career at Carson-Newman or hanging up her cleats and pursuing athletic training at the University of Georgia. “I would love to play soccer in college. It’s always been a goal of mine. But I want to study athletic training at Georgia, too. I’m still deciding,” she says. 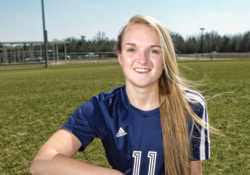 Her junior year, Kaylee Shaver ran cross country for the first time. It was yet another activity she could add to her impressive resume of at least seven non-soccer extracurricular activities. She loved running cross country almost immediately and she noticed that the extra conditioning paid off on the soccer field. “It made me faster and gave me more endurance. I loved the team and our coach was awesome. It was a great experience,” says Shaver. She finished her career with a personal best 5K of 23:02. 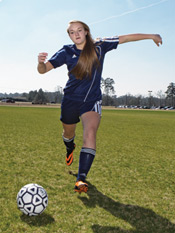 The Sky's The Limit For Camden Big Man