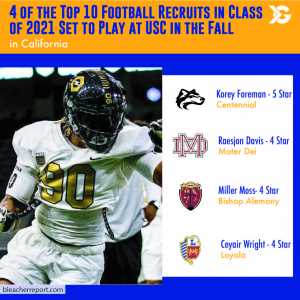 Four of California’s Top 10 football recruits from the Class of 2021 will be playing at the University of Southern California this fall. This includes the best player in the entire nation, defensive lineman Korey Foreman, who is from Centennial High School. Foreman was the most sought out player in the nation by many blue blood programs, and he is rated as a Top 20 All-Time prospect. Beyond Foreman, the Trojans also got the top-ranked linebacker from the state in Raesjon Davis, the top-ranked cornerback in the state in Ceyair Wright and the second-ranked quarterback in the state in Miller Moss. This is one of the best recruiting classes for USC in recent memory, and it is actually the seventh–best recruiting class of 2021. The Trojans are ahead of some notable programs like Notre Dame and the University of Oklahoma. Furthermore, they also have the second–best recruiting class in the PAC-12, trailing just behind the University of Oregon. If USC wants to get back to its glory days and compete for national championships again, this is the recruiting class to help them do so.

“Under the Stadium Lights” Now Streaming

If You Were Given 3 Official Visits, Where Would You Go?

Who Is the National High School Football Preseason No. 1?