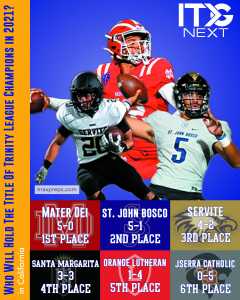 Who Will Hold The Title Of Trinity League Champions in 2021?

The Trinity League is infamous for being the toughest high school football division in the entire nation. Mater Dei and St. John Bosco, in particular, are regarded among the best high school football teams in the country. And the Trinity League in general produces some of the best players in the country. Mater Dei and St. John Bosco have been the only two schools to win the league title since 2012. Additionally, both the Braves and Monarchs swept the rest of the league in 2020. Before then, other teams in the league like Servite and Orange Lutheran did win it all a few times. They, along with the rest of the league, will be trying to dethrone the two kings at the top next season and for the seasons to come. Whether or not they will be successful remains to be seen.

“Under the Stadium Lights” Now Streaming

If You Were Given 3 Official Visits, Where Would You Go?

Who Is the National High School Football Preseason No. 1?