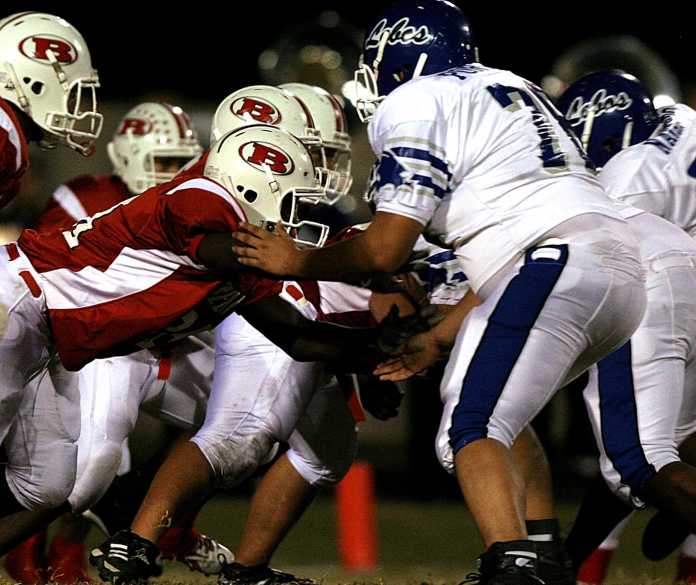 Defense has been a prominent theme so far in this 2022 high school football season. Some of Georgia’s more successful teams have relied on suffocating defenses rather than explosive offenses to win games. Through four weeks, here are the 10 best scoring defenses in Georgia.

The Royals have built on a strong 2021 defense that allowed only 15 points per game. This year, they have stifled their opponents, allowing less than a touchdown per matchup. That includes a recent shutout victory over a ranked Schley County squad and a 32-point blowout over then-No. 4 Wilcox County. One of the state’s most well-rounded defensive units, the Royals have yet to allow a team to pass for more than 100 yards.

One of the best turnarounds this season has come from Luqman Salam and the Cardinals. After notching three wins in the past six seasons combined, Osborne has matched that total in its first three games this year. The Cardinals have found success on both sides of the ball, but their defense is lock-down. Granted, they’ve only faced Lakeside-DeKalb, Woodstock, and Chattahoochee; however, this level of defense should be effective against better opponents during region play.

The Gators are picking up where they left off last season to display one of the best Georgia high school defenses in 2022 so far. Ware County has allowed only 20 points in its three wins, including a very impressive 14-10 victory last Friday over an explosive Benedictine squad. The Gators also blew through Richmond Hill and Baldwin by a combined score of 61-10. Pass defense has been the Gators’ strength so far, but they will need to refine the run defense as the season progresses.

The Raiders have been dominant so far: Their current margin of victory stands at a whopping 51 points per game. While the offense garners most of the spotlight, the defense has been underrated. None of the Raiders’ opponents have scored more than a touchdown on the defense. Logan Brooking’s 6.5 sacks and David Bucey’s 3 interceptions have set Savannah Christian on course for a deep playoff run.

It certainly is a little surprising to see the Eagles on this list of best Georgia high school defenses in 2022, considering they allowed four opponents to score 35 points or more on last season. With a favorable schedule through three games, the Eagles defense has been formidable. All 17 points they have allowed so far came in the opener against Cleburne County from Alabama; the other two results were shutouts.

The Wildcats have been one of the state’s most impressive teams this season, and it’s been a result of defensive consistency. Valdosta has allowed only 15 points in four games, and two of those points came on a safety against Banneker. There were questions surrounding this defense’s integrity against powerful Warner Robins, but those doubts were put to rest after the Wildcats shut out the defending state champions25-0.

Sid Fritts has stressed defense during his time with the Tigers and the results show: They have only allowed nine total points in three games. As with Valdosta, two of those points came off a safety, which generally is not attributed to defensive efficiency. The Tigers offense could use some work, but for now, the defense is a force to be reckoned with.

Could anyone have predicted that Screven County be considered one of the best Georgia high school defenses in 2022? A weak schedule has given the Gamecocks the opportunity and they have taken full advantage of it, shutting out GSIC and Westside-August. A 7-6 victory over Bacon County marks the only points a team has scored on Screven County this season. Freshman Andre Michaud has been a revelation so far with 23 tackles, 8.5 TFLs, and a pair of sacks for the Gamecocks.

If there was ever a year for the Tigers to win the state championship, it’s now. The Swainsboro defense has been lights-out, allowing only one touchdown through four games. A 42-0 shutout victory over ranked Washington County proclaimed that the Tigers were here to stay, and they’ve displayed pure dominance this year. Their physicality is unmatched and no team has outcoached them yet. The sky’s the limit for this Swainsboro team.

The Panthers have not allowed a point this season. No, this isn’t a mistake: Therrell has played three games and has yet to allow any score. A 3-0 win over Towers certainly isn’t promising for the future of the Panther offense, but through four weeks of the season, the Therrell defense can claim the title of best scoring defense in the state of Georgia.