It might be hard to believe, but winning didn’t always come so easily for the St. Johns Country Day girls soccer program.

In the early days of the program, it was quite common for the Spartans to bow out in the second round of the playoffs.

In fact, prior to head coach Mike Pickett taking over in 1999, the Spartans had never been past the second round of the playoffs. That continued for a short while as they fell in the same round in five consecutive appearances (‘97, ‘98, ‘99, ‘02, ‘03) thanks to rivals Gainesville Oak Hall and Tallahassee Maclay.

“To be honest, it was about changing the culture here,” Pickett said. “Before I got here, there were not any high expectations at all, they were satisfied with just getting to the playoffs and the second round.  They didn’t even practice on Fridays.”

In his fifth year, a 6-0 win over Maclay in the first round was the spark the Spartans needed to end the streak; they haven’t looked back since.

Wins over Trinity Catholic and PK Yonge put the Spartans in their first Final Four, where they held off Lakeland Christian 4-2, but lost a 1-0 nail-biter to American Heritage in the title game.

In 2005, the Spartans were back in the Final Four and avenged the previous year’s state title loss to American Heritage with a 2-1 win to win their first of many future state titles.

Even more impressive in the feat was the fact the Spartans held all of its opponents scoreless, outscoring them 25-0 during its playoff run.

St. Johns nearly makes it impossible for its opponents to try to defend them. Throughout the season, the Spartans were led by numerous scorers, including six who scored 10 or more goals.

Cassidy Wasdin was behind the goal for the Spartans and allowed just six goals while making 58 saves, while backup keeper Maddie Wilkes allowed two goals and made 23 saves.

In the semi-final 6-0 win over Lakeland Christian, the Spartans scored all six of their goals in the first half.

Five minutes into the game, Crews put the Spartans on top early with a 1-0 lead. Pavlisko and Zhanee Anderson added goals, and Loustau and Crews each scored twice to put the Spartans ahead 6-0 at the half.

Wasdin and Wilkes combined on the shutout as each made two saves each to preserve the win.

Against Community School in the 1A state finals, the Spartans made it a little more interesting, scoring at least two goals in each half on the way to the 5-0 win.

Wasdin and Wilkes again combined on the shutout and each had one save to preserve the eighth state title.

Newton found the net twice while Detlefsen chipped in a goal with six minutes in the first half to give the Spartans a 3-0 halftime lead. Loustau and Sydney Monroe contributed with goals in the second half.

Pickett, 363-58-27 in 18 seasons, along with longtime assistant coach Brad Schmidt and assistant coach Cody Slaughter, have figured out the recipe of not only how to build a dynasty, but also how to keep it going.

Schmidt, who has been with Pickett 15 of the 18 years, along with Slaughter (in his fifth year) are both St. Johns grads and former boys’ soccer players, while Slaughter was a member of the last boys’ state soccer title back in 2005.

“Having both Brad and Cody here has been a blessing, but that’s what we do here,” Pickett said. “A lot of our coaches are former students and athletes that come back.”

You would think by building a dynasty perhaps, players from nearby Orange Park and Ridgeview both struggling programs would be knocking on the door to transfer to St. Johns, but that’s not the case.

“We have the advantage of having a middle school program, and 15 of the 22 on my current roster have been playing for me since sixth grade. All but one of the remaining seven kids have been playing here since ninth grade,” Pickett said.

Over the last five years, not one single athlete has transferred in. Nearly all of his players come from Orange Park, Fleming Island, or Middleburg.

“Our success has drawn some of those kids to come visit and look at us, but nearly all of them can’t afford it,” Pickett added. “We don’t offer any scholarships and very little financial aid. It’s extremely difficult to get in here with such high academic standards.”

Pickett also mentioned a pilot program he started with the elementary-age kids that will also help benefit his program.

“I started an after-school soccer program for third, fourth, and fifth graders, and we play against other small private schools in the spring,” Pickett said. “So now I will have girls who will have nine years of coaching underneath me.”

Winning five in a row may make some players a little complacent, however Pickett has a plan for that every year.

“Over the last two weeks I meet with every player and make them a sign a one-year annual contract.” he said. “We go over their weaknesses and strengths so they can work on their own or with their club team. They keep a signed copy and I always bring that up to them that nothing comes easy.”

“Two of my seniors, Zhanee Anderson and Madeline Schultz, have both signed with Valdosta State and Air Force respectively, they make the 22nd and 23rd players to sign college scholarships.”

A lot of his former players come back and help him with camps and clinics, including his own daughter Carson Pickett, a recent FSU grad and fourth overall pick by the Seattle Reign.

“That’s a big motivation for the girls; seeing one of their own make it to the professional ranks is huge,” Pickett said. “That helps more girls come out and more playing.”

And as long as Pickett is there, St. Johns Country Day will only continue to get better.

“I’ve thought about retiring a couple of times; I guess I keep waiting for that special class, but then I say that nearly every year, and then I keep coming back.”

And that’s bad news for everyone in the area, and more importantly at American Heritage, Lakeland Christian, and everybody else in 1A.  The road to title number six has already begun.

Growth of the Program 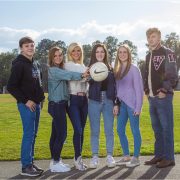 Kicking It On The Pitch