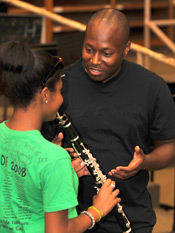 Weekends in the fall mean football. No Friday Night Lights experience is complete without the sights and sounds of a band. Throughout the country, high school musicians and other band members put in long hours of practice, perfecting musical selections, routines, and raising funds to cover costs. The Columbus Valley area is blessed with lots of local talent when it comes to high school bands. 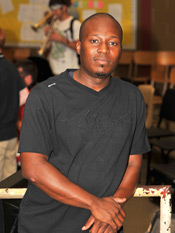 ion of In the Game, we asked Hardaway High School’s director of bands, Vincent Sneed, a few questions about his music program, which includes a marching band during football season. Sneed, the Muscogee County School District’s 2012 Teacher of the Year, shares some thoughts about Hardaway, music education and the young people who make his job a pleasure.

In the Game: When did you begin your teaching career?
Vincent Sneed: I began teaching musicians as early as high school as I worked as a church music director for churches in central and south Georgia. I decided to pursue this passion by majoring in music education. After graduating from the Schwob School of Music of Columbus State University in 2004, I then took on my first position as the band and choir director at Albany High School in Albany, Georgia. During this time, I continued to work as a church music director and also taught private piano lessons to students.
ITG: How long have you been teaching at Hardaway High School?
VS: I am in my seventh year at Hardaway High School. For six years, I have taught band at Hardaway. I taught choir at Hardaway before that for a year.

ITG: What are some principles and ideals you feel that students learn from being part of a band program?
VS: As a band director, I am an educator, not an entertainer. Therefore, the students in the Hardaway High band program develop themselves as individuals by increasing their awareness of different cultures. As a music educator, we utilize music to help expand the students’ awareness of other cultures. This includes cultures within the United States as well as around the world. In Hardaway High School Band, we perform music written in Africa, Asia, Europe, and even New Orleans, Chicago, and Georgia. We perform music that teaches the students about their own history, but also the importance of everyone’s history. Therefore, the Hardaway High Band students not only learn about culture, but also participate in the culture by performing its music.

ITG: How many students are involved in the 2013 marching band program?
VS: About 70 students

ITG: When do and your students begin preparing for football season?
VS: We are always preparing for any performance all year. This allows for students to be successful in all performances whether it is marching, concert, or jazz band. We do have a band camp during the summer which lasts about three weeks. However, this camp has already been reinforced by the constant work we do during the school year working on our general musical skills.

ITG: What are some of the events the Hardaway Hawks band will participate in this marching season?
VS: We are a very busy ensemble. In addition to performing at our football games and pep rallies, we also participate in two band competitions. We spend hours preparing, cleaning, and finalizing our show so that we perform well at our competition. The drumline of the marching band performs at various events across Columbus during the entire school year. We also perform for Santa Parade in the Peachtree Mall and the Veterans Parade.

ITG: In your opinion, what is the hardest part of preparing a half-time program?
VS: Most people do not realize the detail that it takes to prepare a competitive show. At our competitions, the band is graded on many different levels. Students do all of this in full uniform in extreme weather conditions. Each year, the hardest part of preparing the show is ensuring that every detail is superior in spite of heat, rain, scheduling conflicts, illnesses, and other distracting elements that detract from rehearsal time and affect the students’ well-being.

ITG: What are some of the highlights of this year’s half-time program?
VS: This year the HHS Band is learning two shows. One of these shows is for the football games and the other is for competition. This allows for the students to increase their repertoire of genres and intensifies their work ethic. The football game show is a series of funk and soul music from the 1970’s and 1980’s. We will be performing music from Earth, Wind and Fire, Isaac Hayes, and others. The competitive show is music that is specifically composed for competition and revolves around the theme of the letter “Q.” The show is intense and features music that is quick, but also at times quiet, taking you on a quest that quits after eight minutes.

ITG: High school bands provide a lot of support for athletic events. Do your students take pride in being a part of the tradition and spirit at Hardaway?
VS: The band students at Hardaway High School will tell you that one of the best things they have done in their lives utilize music supporting this school and the community. They will cherish all of their memories at Hardaway High School, but their memories in the band program will stand out for the rest of their lives. They love what we do and they love whom they do it for.

Name: Vincent Sneed
Family: My mother is a retired educator having taught college for 30 years and now is an ordained minister. My father owns his own business selling auto parts across the Southern United States. I have three brothers and a sister that all reside in Georgia.
Hometown: Smithville, Georgia 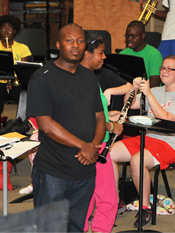 Comments on being selected 2012 MCSD Teacher of the Year: Teaching is not a job. It is a “responsibility.” The future of our world is contingent on our current actions. As the 2012 MCSD Teacher of the Year, I was a representative of all the amazing educators in our district. Teacher of the Year is an honor, but more importantly it is a service. I served to help other educators with their needs so that our children will be successful. I served to highlight other teachers who diligently work to ensure a strong future for our world. And I served to bring awareness to our community of the power of all parts of our educational system whether it is music, art, math, or physical education. I will continue to serve each day with the utmost confidence that the future of our world is in good hands because of the selfless work that all of our teachers do both in and outside of the classroom. 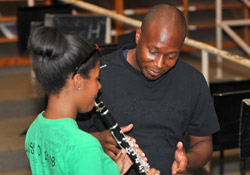