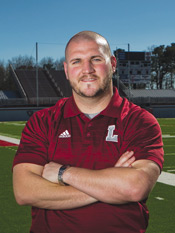 Success has come quickly for Jordan Breit, the third-year head coach of the Lowndes High boys soccer team. After serving four years as the Vikings’ junior varsity coach, Breit was named head coach during the 2011-12 school year. In just his second year as head coach, he led Lowndes to an undefeated region record and the Vikings’ first region championship since 2004. “There was a solid foundation in place when I became head coach. We’ve been able to build the program each year, and that’s been nice. Being a junior varsity coach, I was very familiar with the program when I took over, and I had coached a lot of the players at the JV level. I stepped into a pretty good situation,” he says.

A native of North Georgia, Breit always knew he wanted to one day teach and coach. He attended Jackson County High School and was joi 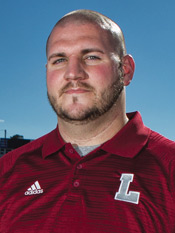 nt enrolled at Gainesville College (now a part of the University of North Georgia) his senior year. Breit played football, soccer, and wrestled at Jackson County. From there he attended Valdosta State University where he pursued a degree in education. Breit did his student teaching at Lowndes High and was hired fulltime at Lowndes after he graduated. While he has worked at LHS, he has continued to take classes at VSU, obtaining a master’s and a specialist’s degree.

Breit wasn’t sure if he wanted to coach football or soccer, and he wasn’t exactly sure what the timetable would be for his coaching career to begin. As things turned out, most of those decisions would be made for him, and they would be made pretty quickly. The first semester Breit was working at Lowndes, a spot on the junior varsity soccer coaching staff opened up. He got the job with the goal of one day becoming a head soccer coach. Four years later, he achieved his goal when he was named head soccer coach at Lowndes. 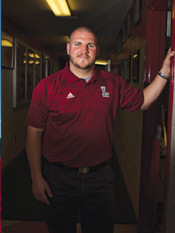 The Vikings made the playoffs during Breit’s first year. They built upon that success last season with a region championship and an undefeated run through the region schedule. Heading into the 2013 season, Breit knew his team had the talent to do something special. “I knew we could perform at a high level. That senior class was a special group, and they wanted to accomplish something together,” he says. With the 2014 season looming, Breit says his goals haven’t changed. “I’d like to do the same thing this year. We have another talented group, and I’m excited to see if they can accomplish the same thing.”

Breit has built his program around two words: Viking Pride. “These are just two little words, but they mean a lot,” he says. Viking Pride means that players will be dedicated to the team, they will work as hard as they can to be the best players they can be, and they will be disciplined on and off the field to do what they can to help their team. “Within that are the little things they will use every day in life—be on time, work hard, if you must miss practice, let the coach know. We hold them accountable to that,” he says.

To achieve the goals he has for his team, they must perform the best they can each and every day. There are no off days, no time to take breaks. Breit and his staff demand excellence, and excellence requires hard work and attention to detail. “On the field, our biggest challenge is getting them to perform their best consistently. Age is a factor in that these kids are 16, 17, and 18 years old, and we demand a lot out of them. It’s a lofty goal, but it’s what we strive for. We want our players to do their best every single day,” says Breit. 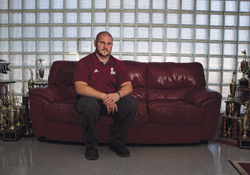 If coaches are married and have children, there is no way they can do what they do without their families’ support. Coach Jordan Breit is a relatively young guy; not long out of college and just a few years into his head coaching career. He and his wife Erica were married on New Year’s Eve.  “We dated for six years. So she knows what soccer season is all about. She’s very supportive, and I wouldn’t be able to coach without her understanding,” Breit says.