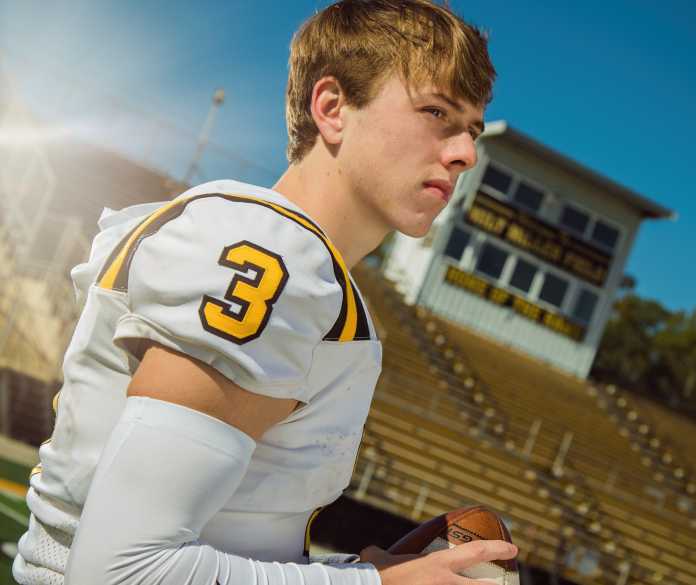 When it comes to football, South Georgia has definitely made a name for itself. While some of the bigger towns seem to get more statewide recognition, you simply can’t forget about the athletes and the hidden talents that reside in cities such as Sylvester, GA. One being junior Chip Cooper, quarterback of the Worth County High School football team.

Being the quarterback of the team is a full circle moment for Cooper. Since the age of seven, Cooper has had a connection with the team. It all began with him being the team’s ball boy. Going to all the games, surrounded by all the coaches and learning from players paved the way for him to become a leader to his teammates, on and off the field.

Cooper says that all those years being a servant to the team played a huge role in where he always wanted to be in life. “It didn’t matter if I was a water boy or the ball boy, I just wanted to help the Rams,” said Cooper.

Besides being heavily involved with the Rams, Cooper’s passion for football grew bigger in middle school. The quarterback position came from him having experience as a baseball player, which he still plays.

Interesting fact about Cooper: He did not start as quarterback until the seventh game of his sophomore season. Talk about being prepared at the right time.

During that game the team was already down 28-0 in the second quarter. With not much to lose, his coach put him in the game where he was able to show everyone what he was made of. “We didn’t win but the fans stayed. It was just excitement because we were scoring,” he said.

Not only does Cooper have a long history with the school, but his father does also. David Cooper has been the statistician for the football team since he was a student there in 1985. A statistician keeps up with both the offensive and individual yardage, opponent stats and any other statistics that need to be recorded. He explains what being a part of the same team as his son means to him.

“It makes me proud,” said David Cooper. “Me being a part of the Rams for this many years… and now that he’s there just makes it more special. Sometimes I get caught up when he’s on offense in wanting to watch him more than the plays.”

With David being athletic himself as a tennis player, it’s easy to see where Cooper got his athleticism from.

Cooper’s goal before he graduates is for the team to make it to the playoffs, something they haven’t been able to do. This year they were close but fell short in the last game. What will it take for the team to reach that goal? Cooper says it’ll take the team to be disciplined and focused.

“We’re not the biggest or strongest team but we’re going to give it our all every game,” said Cooper.

Many may think Cooper is an underrated player. If you didn’t know, he passed 1921 yards (21 touchdowns) and rushed for 1002 yards (seven touchdowns). According to MaxPreps, Cooper ranks No.2 in his position for total rushing yards for the class of 2023 and No.21 with passing yards, both for the state of Georgia. Cooper was also named First Team All Region Quarterback in 2020.

Just because football season has come to an end this year, doesn’t mean Cooper is resting. He continues to be on his grind as he prepares for baseball season. He doesn’t have any college offers as of now, but he is open and would be thankful for the opportunity to play either sport on the collegiate level.

Cooper offers his advice to other athletes out there: “You just have to stick with it,” he said. “It’s not just something that you can just quit and then come back to.” He also suggests to keep hitting the weight room as much as possible.

David Cooper gives advice to other parents: “Don’t pressure your child,” he said. “Don’t push them to live your dream.

With senior year coming soon, we will have to wait and see what this dual quarterback will do. Looks like he will do some incredible things in the future.