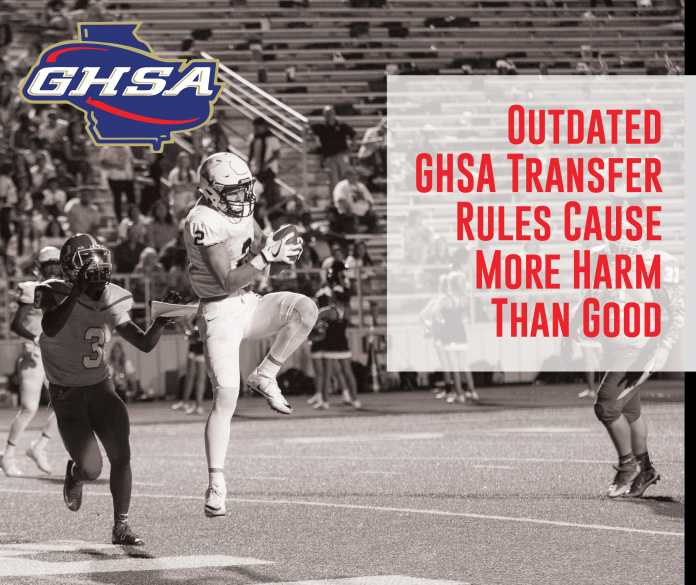 Once again, the restrictions led by the GHSA transfer rules haven’t solved any problems. Rather, it’s continuing to create new ones.

It’s one of the most controversial topics in high school sports. In the age of player empowerment from the professional games down, the discussion has reached the high school level. Each state has taken its own measures to enforce, or not enforce, transfer rulings in their respective states.

A litany of rulings by the GHSA saw multiple players ruled ineligible, most notably Carlos Del Rio-Wilson at Grayson High School. The GHSA is also investigating Valdosta quarterback Jake Garcia; his parents agreed to legally separate so that Garcia could play football in Georgia, but they recently told ESPN that they are going to get back together after the season is over.

People move every day, and it’s difficult to enforce the rulings for every player, so what exactly led them to investigate these specific cases?

The GHSA requires a bona fide move. According to the GHSA bylaws, a transfer student who has established eligibility at a former school in grades 9-12 shall be immediately eligible at the new school if: (a) The student moved simultaneously with the entire parental unit or persons he/she resided with at the former school, and the student and parent(s) or persons residing with the student live in the service area of the new school.

Georgia requires proof of this move and is one of the stricter enforcers of transfers within their state, especially in comparison to their neighbor to the south, where Florida has some of the most relaxed rules regarding transfers in the country. The question becomes this: As more and more states are opening up the game to transfers, what is it accomplishing at this point?

Unless there’s proof of money exchanging hands between schools and students to transfer schools, how is a player transferring schools going to ruin high school football? The GHSA will say that it’s to keep the competitive balance of the sport, but the Peach State currently has a five-time consective state champion in ELCA, a three-time state champion in Blessed Trinity, the winningest football team of all time in Valdosta High School, and one of the most dominant programs of the early century in Buford. Clearly, the idea of competitive balance is for naught. There will always be powerhouses in the sport, with or without transfers.

No one is advocating that high schools turn into junior colleges. Schools shouldn’t recruit talent by any means. But if a player decides he can maximize his future at another program, why should the GHSA decide where a player decides to go? After all, the GHSA is the first to say that the game is about the kids. If it’s about the kids, then they should have the ability to choose their own futures. It’s clear that the GHSA transfer rules are only built to soothe the egos of some of their programs.

Transfers have become a part of the game every day, and, honestly, if it puts the kid and the family, the most important part of the game, in the position to make the decision that is best for their family, why shouldn’t it? As long as a team isn’t recruiting or a booster isn’t offering money, every team is on an equal playing field with open transfer rules.