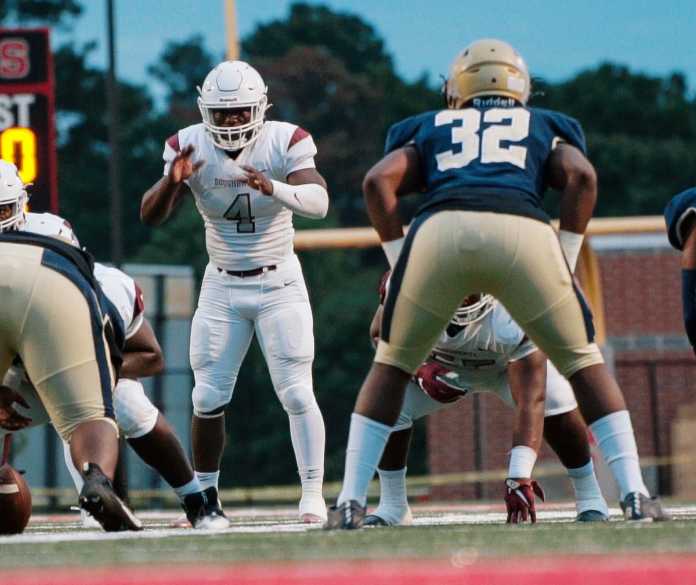 Georgia is known to produce some of the nation’s best defensive talent in high school football. However, even in matchups where defense was projected to take center stage, offenses stole the show in Week 7. Several matchups featured aerial dominance, while others were the product of imposing rushing performances.

Due to Hurricane Ian, many Georgia high school football games were moved up to Wednesday. Fifteen games on that day featured at least 30 points scored by one team, including a high-scoring shootout between Brunswick and Grovetown, which ended 56-39 in favor of the Pirates.

Savannah Christian continued its offensive dominance with a 54-20 rout over Long County, while Thomas County Central kept its undefeated season intact with a blowout home win against Veterans. Colquitt County, the only 7A team to play on Wednesday, improved to 6-0 due in large part to running back Charlie Pace, who rushed for 125 yards and 2 touchdowns on 15 carries. Berrien handed Jeff Davis its sixth loss of the season in a 42-24 beatdown that featured only four completed Rebel passes. These explosions by Georgia high school offenses served as a precursor to a high-scoring weekend.

Thursday proved to be the most eventful day of the week, as anticipation of the hurricane forced more than half the state’s games to be moved up by a day. The two televised games showcased Georgia’s offensive firepower. First, Calhoun snapped Cartersville’s 62-game region win streak with a 50-48 triple-overtime victory. Canes running back Malachi Jeffries busted the Calhoun defense for 155 yards and 4 touchdowns, but the Yellow Jackets’ Caden Williams stole the spotlight, tearing through the Cartersville front seven on every carry.

In an equally long game, North Paulding pushed Walton to the brink, matching every score and even taking a late lead. However, a Raiders field goal in the waning seconds secured a 51-49 win. In north Georgia, Hiram and Dalton played in a classic shootout thriller, with the home Catamounts emerging victorious, 52-45. Farther south, Lee County routed Houston County and held the Bears to just 2.5 yards per carry.

Quarterback Kasen Weisman led the South Paulding Spartans to a 48-35 rivalry win over Paulding County, and Rome and North Oconee tied the night’s record for points with 70 each. Finally, in the lower classes, Telfair County defeated Hawkinsville 54-30 and Worth County edged Dodge County 47-38, keeping the Rams’ undefeated season alive for another week.

The biggest explosion of Georgia high school offenses came on Friday night between North Gwinnett and Meadowcreek. Three touchdowns were scored in the first minute of the game, and the point total ballooned to 48 by the end of the first quarter. Both teams traded blows until the Bulldogs pulled away for a 46-35 lead after a 90-minute first half. North Gwinnett tacked on two more scores in the third quarter to enter the last period leading 60-35. The game finally ended at 67-41, more than three hours after it had begun.

A more competitive matchup emerged in Peachtree City between McIntosh and Heard County. Led by the second leading passer in the state, Tate Morris, the Chiefs knocked off the Braves on a well-defended two-point conversion with no time left. That 35-34 victory secured McIntosh’s third win this season, equaling the school’s win totals of 2018 and 2019.

Decatur and Tucker combined for 81 points in a 53-28 win for the Bulldogs, and Marion County crushed Central of Talbotton, 66-2. Mount Pisgah, which raised eyebrows with its season-opening upset over Fellowship Christian, improved to 5-1 after a 49-27 win over Mt. Zion-Carroll. Lastly, Christian Heritage tied the week’s point record with a 70-0 defeat against Ezell-Harding from Tennessee.

Each season appears to bring a more offensive flavor to the Georgia high school football landscape. However, defense still appears to be the key for state championship-caliber teams. This season, Creekside, Buford, Hughes, Cedartown, and several other teams considered the elite teams in their respective classifications have relied on defense more than offense to win games.

The Wolves’ defense currently allows just under 8 points per game, while Creekside used its talent to shut down a nationally ranked East St. Louis team from Illinois a few weeks ago. Even the usually offensive-minded Prince Avenue Christian Wolverines have held opponents to less than two scores per game. Offense has always been the spark in the regular season, but the most successful playoff teams have always relied on a great defense. Will that trend continue this year, or will offenses take center stage in the Georgia high school playoffs?