During his junior year at Calvary Christian School, Mason Henderson became very adept at time management. The multi-talented musician and dual-sport athlete spent the year adapting to playing sports while also fitting in practices for his church’s worship team. Throughout his busy schedule, Henderson came away with a solid 3.8 grade point average.

It wasn’t easy, and he admits his grades did dip a bit in the beginning, but Henderson had the experiences of a lifetime as a member of not one, but two sports teams that advanced to the state playoffs.

“Two state appearances in one year. That is a pretty big deal,” says Henderson.

The Calvary Knights football team and baseball teams both advanced to the state playoffs, with both teams going into the final game of their respective series. Although the teams didn’t come out as state champs in Division I of the Georgia Independent Christian Athletic Association (GICAA), Henderson claims the ride to the finals was something to remember. 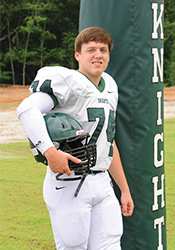 Prior to last year’s winning seasons for the football and baseball teams, Henderson had not participated in organized sports since he was a youngster. He became interested in music in the third grade when he learned to play the piano. Soon thereafter, he began playing for First Assembly of God Church in Phenix City during the kid’s worship program. Along the way he added the drums, guitar, and other keyboard instruments.

Music became a true passion for Henderson. In the fifth or sixth grade, his church recognized his talents and asked him become a part of the main church worship service.

“Yeah, I got called up to the big leagues. Big church is what we called it,” he says, laughing.

Developing his talent with musical instruments and assisting with church worship took a lot of Henderson’s time after school hours. He had only attended Calvary for Pre-K back in the day, but enrolled at the private Christian school his freshman year. At that time, he was still heavily involved with his music.

“I just really didn’t think I had the time to try sports. I had practices for church and the worship team. Right before my junior year, I decided I would like to play football because I didn’t want to leave high school and miss out on the experience,” he explains.

Although he had a little anxiety the first day of spring football, Henderson says after he put his helmet on and got into the mix, everything came back to him. He found a place on the team as a linebacker, which suited Henderson just fine. Laughing, he says the best thing about playing that position is getting to hit someone without getting in trouble.

The experience on the gridiron inspired Henderson to try out for baseball during the school’s fall ball schedule. Football sparked a desire to be a part of team sports, and Henderson found the same sense of belonging with the Knights’ baseball team. Last spring, the second baseman (and sometimes outfielder) found himself a part of another winning team. It was definitely a positive experience for the rookie athlete.

Due to his athletic endeavors taking up a good chunk of his time, Henderson found that the church music practices sometimes were a casualty of his busy schedule. He missed a few Sundays of play in church because of missed practices with the worship team, but on the whole, Henderson says he managed to keep everything going in the right direction.

He could have slacked off with his grades and just done the bare minimum in order to comply with pass/play requirements. Henderson did find he let his academics slip a little, but he quickly got a grip on the situation, placing academics ahead of everything else.

“The work has always come a little easy to me, but with the added practices for sports, I had to start paying more attention. My parents want me to make good grades, but it is really something that I do because I know the academics are the important part of what I am doing,” he says.

For his senior year, Henderson is taking AP and Honors classes in preparation for college. He plans on attending Columbus State University after high school. His favorite subject is anatomy, which leads him to think he might like to pursue a field of study related to it.

This fall, the senior is excited about his second football season. There is a lot to be excited about, too. Calvary is in the process of developing an athletic complex that includes the new football field for Knights home games. It’s a first for the school, and Henderson is hoping the season leads to another first: a state football championship. Of course, he wouldn’t mind adding a state baseball championship, too.

“That would be ok with me,” says Henderson with a smile. 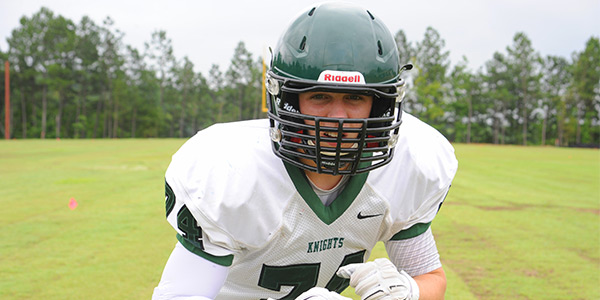