McCauley Takes Over for Trojans 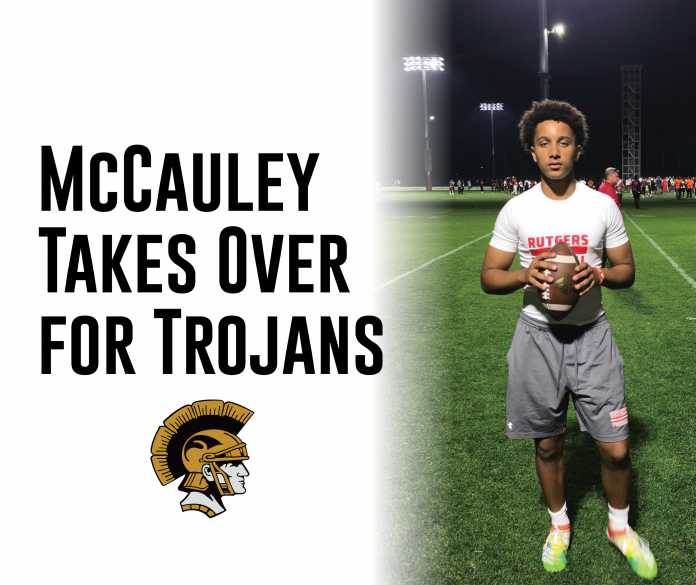 What do you do when you lose one of the top quarterbacks in the nation by transfer?

If you are Carrollton High School in West Georgia, it is quite simple: You add another top quarterback.

This was the situation in early August when news broke that M.J. Morris, a major SEC prospect with offers from Alabama, Auburn, Georgia, Florida, and LSU, was transferring from the Trojans program. Morris, who threw for 2,186 yards and 20 scores and rushed for 379 yards and eight touchdowns in 2019, announced via Twitter that he would instead suit up for Pace Academy this fall.

This could have been a massive loss for Carrollton. Coach Sean Calhoun and the Trojans enjoyed a plethora of success in Morris’s sophomore season, as the four-star athlete guided the Trojans offense to new heights en route to an undefeated regular season, a Region 7-5A championship, a trip to the Elite Eight, and a 12-1 finish.

Please note that I said “could have been.”

Days after Morris shared that he would be a Knight, the Carrollton football program picked up a huge transfer in junior James McCauley.

McCauley, a 6-foot-2, 190-pound pro-style quarterback, was a backup last season at Archbishop Stepinac High School in White Plains, New York. The Empire State resident reportedly made the move due to concerns about whether or not there would be a high school football season in his home state.

“Due to COVID-19 and the uncertainty of a fall football season in New York I am in a very tough position,” McCauley said in a tweet on Aug. 13. “With that being said, I will be transferring to Carrollton High School in Georgia.

“This was a very hard decision for me, but I feel very confident in making this decision. I can’t wait for this opportunity to compete and play for Carrollton this year!”

Luckily for McCauley, the GHSA made it very clear early on that there would be high school football in Georgia this year. This allowed for the 16-year-old to call Carroll County his new home, and the move will likely bring more scouting opportunities for the blossoming prospect.

McCauley was already impressing regional analysts in camps as soon as he touched down in the Peach State.The Class of 2022 gunslinger was named one of the top performers of the Infinit Football Camp in August, being praised with other star signal callers like Cherokee’s A.J. Swann, Putnam County’s Gerald Kilgore, and Christian Burks of Langston Hughes.

McCauley, an honor roll student at Archbishop Stepinac, was invited to the Elite 11 quarterback competition and earned a scholarship from Rutgers during his time as a Crusader. In the past week, he has received interest from FBS programs such as Temple and Marshall and Ivy Leagues like Columbia, Dartmouth, and Princeton.

Although he had a rough go of things in his Carrollton debut in Saturday’s loss to 7A Collins Hill (100 yards on 10-23 passing with one touchdown and three interceptions), the Division I bound McCauley will look for more success against opponents in similar classifications in the coming weeks.