On the football field, there are few players that hold more value than offensive linemen.  If the ball is handed off to a running back, it is the job of the linemen to open holes, create gaps, and make room for the running to explode in efforts to reach the end zone. If the ball is going through the air, the linemen are responsible for protecting the quarterback, keeping him upright, and giving him enough time to throw the ball where it needs to be thrown.

They are often underestimated because they don’t end up on highlight reels or seek the attention or the glory.  But offensive linemen are a dime a dozen.  Anyone can be big.  Anyone can be quick on their feet.  Anyone can be strong.  But not many are the perfect combination of all three, while also possessing incomparable intelligence and wit to command the rest of his line in the heat of battle.  It is for this reason that the Bulldogs of Thomasville High School have grown to know and love senior Mason Hodge.

“I want everyone at Thomasville High to remember me as well-rounded,” Mason says.  “I get things done, whether it’s on the field or in the classroom.”

Mason is hard to miss on the gridiron.  Standing at 6’2” and weighing in at around 255 pounds, he is quite the imposing figure when you’re lined up on the opposing side of the line of scrimmage.

“This fall, I just want to make our fans and community proud,” he says.  “I want to, hopefully, win our region (Region 1-AA), and I want to go as deep as possible in the playoffs.”

Region 1-AA is no slouch when it comes to football in Georgia; the region includes the likes of the Pelham Hornets, the Brooks County Trojans, the Berrien Rebels, the Early County Bobcats, the Seminole County Indians, and the Fitzgerald Purple Hurricane.  In 2014, the Bulldogs went 5-1 in the region, with their sole loss coming at the hands of Brooks County.

“I really want to beat Brooks (County).  We haven’t beaten them during my time here, and I didn’t play so well against them last season.  I owe them one.”

What makes Mason so impressive, however, is that his imposing physical stature on the field pales in comparison to his imposing intellectual stature in the classrooms of THS.  It is for this reason that Mason spent his summer visiting Ivy League schools such as Cornell, Carnegie Mellon, and the Massachusetts Institute of Technology (MIT).

“I love science, physics, and math,” he says.  “After high school, I would love to study engineering in college, wherever I go.  My goal is to eventually become a mechanical engineer.”

Mason loves the game of football.  He began playing around the age of ten, and his senior year will be his fourth season with the Bulldogs.  As much as he loves the game, however, he loves education and career advancement that much more.  Because of that, he is unsure as to whether he will pursue athletics at the next level.

“I haven’t made a decision as to whether or not I will play college football,” he says.  “I would like to, but it depends on my academics.  Those come first.”

Mason also competes with a team from Thomasville High in a competition called “Odyssey of the Mind.”  Odyssey of the Mind is a creative problem-solving competition for students from kindergarten to college level, with teams competing from 25 countries from around the world.  Mason’s fondest high school memory occurred when his team, led by Creative Thinking instructor Sharon Cernogorsky (who is now a member of the Coaches’ Hall of Fame), finished sixth in the world in their most recent competition. 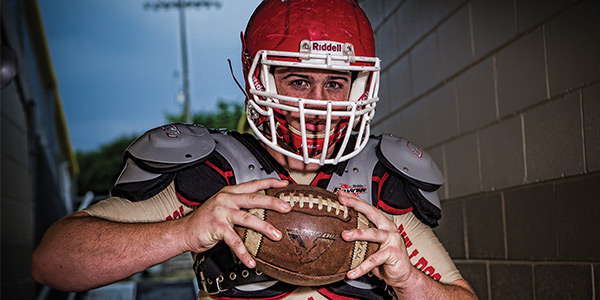 Top Places to Watch the Jags

Should Tackle Football Be Banned Until High School?

The Georgia Bridgemen: Marching to the Beat of Their Own Drum
Scroll to top