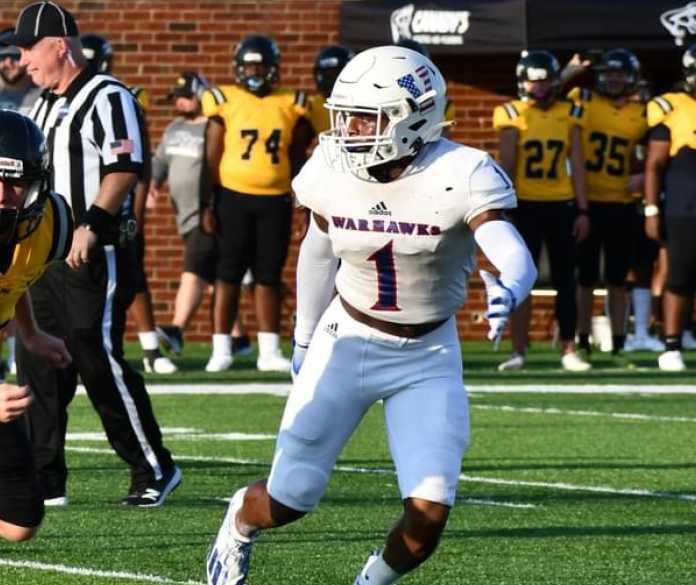 In the Classroom and on the Field, Nate Brooks is ‘the Whole Package’

Born into an Air Force family, Nate Brooks has moved around a few times – from Maryland to Texas to Georgia, where his family settled in 2011 – but one thing has been a constant in his life: Football.

Nate, a senior at Houston County’s Veterans High School, has been playing the game since he was 4. Back then it was flag football; he’s long since graduated to the tackle version, and he’s good at it: In his final season for the Warhawks, he was a standout on defense, recording 61 tackles, 21 assists and 3 interceptions as a safety; and offense, with 407 yards and 5 touchdowns as a running back.

Nate also plays guard in basketball, but he’s emphatic that football is his favorite sport.

“I really enjoy being part of a team that’s just like family, and having the support of the community,” Nate says. “And of course the love of the game – being out there playing it is just a great feeling.”

Nate doesn’t let his academic studies suffer at the expense of sports; in fact, he’s an outstanding student in the classroom as well.

“I have to keep my priorities in order, so I focus first on getting my grades right,” he says. “That and football, I always put those two things above everything else, and it’s worked out pretty well.”

Veterans Head Football Coach Milan Turner calls Nate “one of the best student-athletes I have ever coached” – and with more than two decades in the business, Turner has coached a lot of them.

“He is a wonderful young man,” Turner says. “He’s the whole package, from academics to athletics to just as a human being, they don’t get any better.”

Nate was seemingly always on the field throughout his career at Veterans. Wherever he was asked to play, he responded. He’s a coach’s dream: Not only athletic, but also selfless, intelligent and coachable.

“It was a huge advantage to have him to plug in wherever he was needed these last four years,” Turner says. “He’s very strong, he’s got really good speed, he’s physically tough and he’s got a great football IQ. He’s played everywhere from running back to slot receiver to safety to outside linebacker to special teams. It didn’t matter where we put him or what we needed him to do – we just coached him up and he was ready to go. He could play it like he’d been there forever.”

With his senior season behind him, Nate now is looking ahead to a college career. He’s attracted the attention of recruiters around the state and the region, including coaches from Mercer, West Georgia and Valdosta State. The recruitment process can be hectic, but he’s taking it all in stride and embracing it as part of a memorable senior year.

“I’m still waiting to make a decision,” Nate says. “It can be [challenging] at times, because you don’t know what your future may bring you, but that’s all part of the excitement.”

Read more from this year: