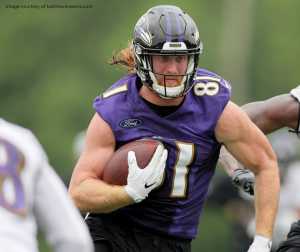 Hayden Hurst, the 6’5″, 250-pound tight end for the Baltimore Ravens, was not always a football player. He grew up dominating on the pitcher’s mound in Jacksonville, Florida. I was unlucky enough to have faced him multiple times, and let’s just say he threw so hard there was no point in taking the bat off your shoulder.

Hurst was drafted to the Pittsburgh Pirates in the 17th round of the 2012 MLB Draft out of Bolles High School. He had committed to play college baseball at Florida State, but chose to sign with the Pirates instead.

Over the next couple of years,Hurst struggled wildly with accuracy and seemed to lose all confidence in his abilities. After months of trying new techniques and training, Hurst moved position to first base. It wasn’t an easy transition for a pitcher to pick up a bat at the minor league level. The struggles continued, and Hurst found himself in an odd spot: still young enough to have a professional career but facing the realization that baseball wasn’t the sport for him.

After retiring from baseball, Hurst decided to walk on the South Carolina Gamecocks football team to play tight end. Having not played football in several years, Hurst displayed incredible athleticism to make the team. Not even a year later, the Nordic-looking tight end was starting for a Division I SEC football team, making big plays in big games.

Eventually Hurst declared for the NFL draft, resulting in a first-round selection where he’s continued to develop as a football player. The determination and resiliency to not give up on a goal or a dream is admirable. Mad respect, No. 81.