The First Tee of Northwest Florida

With the departure of two of the area’s all-time best female Junior Golfers, Madison Pacheco and Miranda Holt to the University of Florida and Southern Miss respectively, Girls Prep Golf will be looking for the next generation of stars, so here are a few of the names to know:

Four for the Fall: 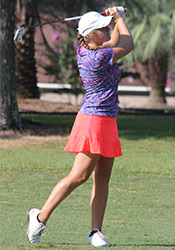 Fresh off her win at the 58th Annual Divot Derby, Navarre HS Senior Ailsa Clark turned everyone’s heads with a stellar final round six-under 65 to come from eight shots back to take the title.  Having just started playing golf in 2012 at age 13, she won her first nine-hole GPJGA event and hasn’t looked back.  Playing Number One on her team since her freshman year, she won four of the seven 3-team matches last year–and finished second in the other three matches. She shot 74 at the Class 3A District 1 tournament, finishing one shot out of first. At the Class 3A Regionals in Gainesville, she was 3 under par after eight holes but struggled on the back nine to finish with a 78, finishing 9th out of 52 players. Ailsa won the 2014 Pensacola City Championship, and was selected to play for the Panhandle Cup’s West Team where she won all three of her matches, helping the West Team to an unprecedented 12.5 to 5.5 win over the East (Tallahassee) Team. In May, Ailsa qualified for the Optimist International Tournament by shooting 76 at Orange County’s 6000 yard Crooked Cat course, and also won the Emerald Coast Junior Tour’s Match Play Championship–beating the State of Florida’s number 33 and 73 ranked players on the way to the championship. In July Ailsa shot 74-73 to finish fourth in the Northwest Florida Daily News Tournament. Her recent fine play has pushed her USGA handicap to 1.4—and started the college coaches talking. 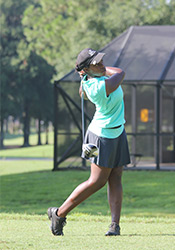 Another rising Senior is Jade Sanders of Booker T. Washington High School.  A seven-time medalist for her 2014 HS Matches and 3 year FHSAA Regional Qualifier, Jade has claimed the Tom Dorsey Winter Classic, City of Pensacola Junior Championship and was Medalist at the 2014 FWB Daily News Tournament.  Champion at the 2015 Optimist Alabama Qualifier, she went on to finish 41st at the Optimist International tournament at PGA National.  A member of the 2014 PNJ All-Area Girls Golf Team, she is fresh off of Top-Five finishes at the Divot Derby, SJGT and Dixie PGA events.  Jade is a member of Positivity Youth Club at WHS and the Antioch Baptist Church Youth Choir, and has set her sights on playing collegiate golf at one of the following schools: Alabama State, Bethune-Cookman, Jacksonville (FL) University, Southern Miss or The University of West Florida. 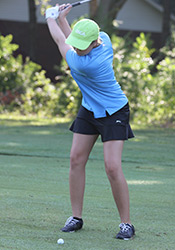 Abigail Herrmann is a Senior at Pensacola Catholic High who recently verbally committed to accept a scholarship offer to play Division I golf at the University of Memphis in 2016.  Abby used her success late last year as the 2014 Tom Dorsey Winter Classic winner and The GPJGA Bonnie Cook Trophy winner (low stroke average on the 2014 Summer Tour) as a springboard to multiple wins and high finishes on regional and national junior golf tours in 2015.  Abby’s 2015 highlights include: three wins on the Emerald Coast Junior Golf Tour with a stroke average of 74 and the Spring Points champion; T2 the AJGA St. Francisville, LA Junior at the Bluffs Qualifier, then 12th in the full field (54 hole) event; 2nd in the Florida Optimist International Junior Championships Qualifier at Orange County National Golf Club in Orlando; Finished in the top third of an international field (T37th of 120) at The Optimist International Junior Golf Championships at PGA National Resort,  Palm Beach Gardens, FL; 5th at the Allstate Sugar Bowl Junior Golf Championship at English Turn GC in New Orleans.  Abby was also selected to represent Northwest Florida at the FSGA Junior Team Championships at Walt Disney World Resort and is currently ranked inside the top 200 female junior golfers in the United States on both Golfweek and Junior Golf Scoreboard rankings. 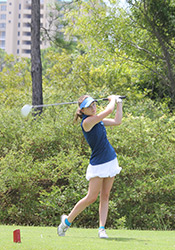 Teaming with Abby again on a loaded Catholic Girls Squad is Junior Madelyn Dimitroff. Starting for the Crusaders as Freshman, she pulled her weight with undefeated freshman season and a one-loss sophomore season—and to District 1A Team Championships in 2013 and 2014, and a Regional Championship and runner-up in those two years respectively—giving her two State Championship appearances under her belt.   In those two years this hard worker has dropped 10 stokes off her handicap, having won top honors in the 2013 GPJGA 14-15 Future Masters Division Summer Tour, Divot Derby and A. Downing Gray Cup.  She followed that with 3rd place finishes in the In 2014 Summer Tour 14-15 Junior Masters Division and Downing Gray.  After 2nd place finishes in the Pensacola City Championship and Southern Juniors, she won the 2015 Bonnie Cook Trophy (Low Scoring Average for the Summer Tour) with a 78.3.  An Honors Student with a 4.3 GPA, she is ranked 9th in her class and is a member of the Mu Alpha Theta math honor society. An Ace Participant of The First Tee, she has almost 100 hours volunteering as a coach and mentor for the Northwest Florida Chapter. 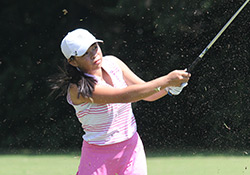 Payton Pacheco, Pensacola Catholic HS—The younger sister of star prep golfer Madison Pacheco has decided to forgo volleyball for the Lady Crusaders and follow in her big sister’s footsteps.  Always to be found on the range or the putting green with her older sibling at Pensacola Country Club, in her short junior golf career she already has a career-low 75 on the GPJGA Summer Tour and shot two rounds in the 70’s to finish sixth in the 2015 Divot Derby Presented by Bubba Watson. 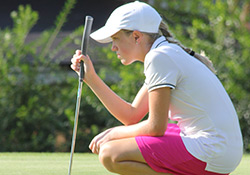 Caroline Craig, Niceville HS: Began playing at the age of 6 with The First Tee of Northwest Florida, at age 9 she was selected to play with Annika Sorenstam in the Annika Challenge.  A member of the World Cup team at US Kids World, she will be playing in the SJGT Cup for the West this fall.  She won their Female Sportsmanship award in 2014—and was the age 12-14 winner of the SJGT Championship at Atlanta Athletic Club, finishing 2nd overall.  She has a 1.2 handicap, and shot a career low 2-under 70 in the 2015 Divot Derby, leading her to a runner-up finish at the age of 14. Began playing AJGA events this year as well as taking unofficial college visits—would like to play somewhere in the Southeast, such as Georgia, Furman, Ole Miss, Mississippi State or Samford.  Caroline is an officer with FCA and their “Go the Distance” award winner for 2015, a member of National Junior Honor Society, received the Presidential Award for Academics and made the “A” Honor Roll. 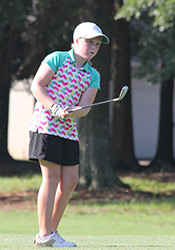 Name to Know for the future: Caroline’s little sister, southpaw Catie Craig who is currently a 7th grader, FCA Officer and “A” Honor Roll member at Ruckel Middle School–where she will surely follow in Caroline’s footsteps as Captain and MVP of the golf team. Starting golf at the age of 5 with The First Tee of Northwest Florida, she won the Responsibility Award in 2013 and has already been named the Red Hills Junior Tour Player of the Year.

Girls Golf Heats Up Across the Panhandle

The team that just doesn't go away

A Squirrel on the Run!