With the Florida High School Baseball state playoffs set to begin this week, our 7A-4A Top 25 receives one final update before the postseason gets underway.

The top three remains unchanged in IMG Academy, Stoneman Douglas and Lake Brantley, while American Heritage makes a small jump over Miami Columbus up to No. 4. Among the other significant risers this week are teams such as Miami Springs, Sandalwood and Tate, while arguable 6A title favorite Pace inches closer to the top-5.

Six new teams entered the bottom half of the rankings this week, a group headlined by Class 7A’s Plant at No. 19.

As the 2022 Florida high school baseball playoffs approach, the 3A-1A Top 25 sees a new team atop the rankings for the first time this season.

In a matchup of two of the better teams in the state late last week, Calvary Christian topped Berkeley Prep to claim the No. 1 ranking in this week’s update, dropping The First Academy from the top spot. Another Class 3A team, Melbourne Central Catholic, also was a significant riser this week as the Hustlers continue to enjoy a strong season.

Three new teams also entered the rankings in this week’s update, a group headlined by 2A’s Trinity Christian at No. 23.

As we are now fully into the second half of the 2022 Florida high school baseball season, IMG Academy remains firmly established at the top of our 4A-7A Top 25 rankings, with Stoneman Douglas not far behind.

As for the biggest takeaways from this week’s update, American Heritage and Taravella each saw significant rises into the Top 10, while a total of 11 new teams entered the rankings. Among that group is 7A’s Park Vista at No. 8, with 6A’s Pace not far behind at No. 10, as well as Mater Lakes Academy becoming the second 4A team in the Top 25 as they enter at No. 21. 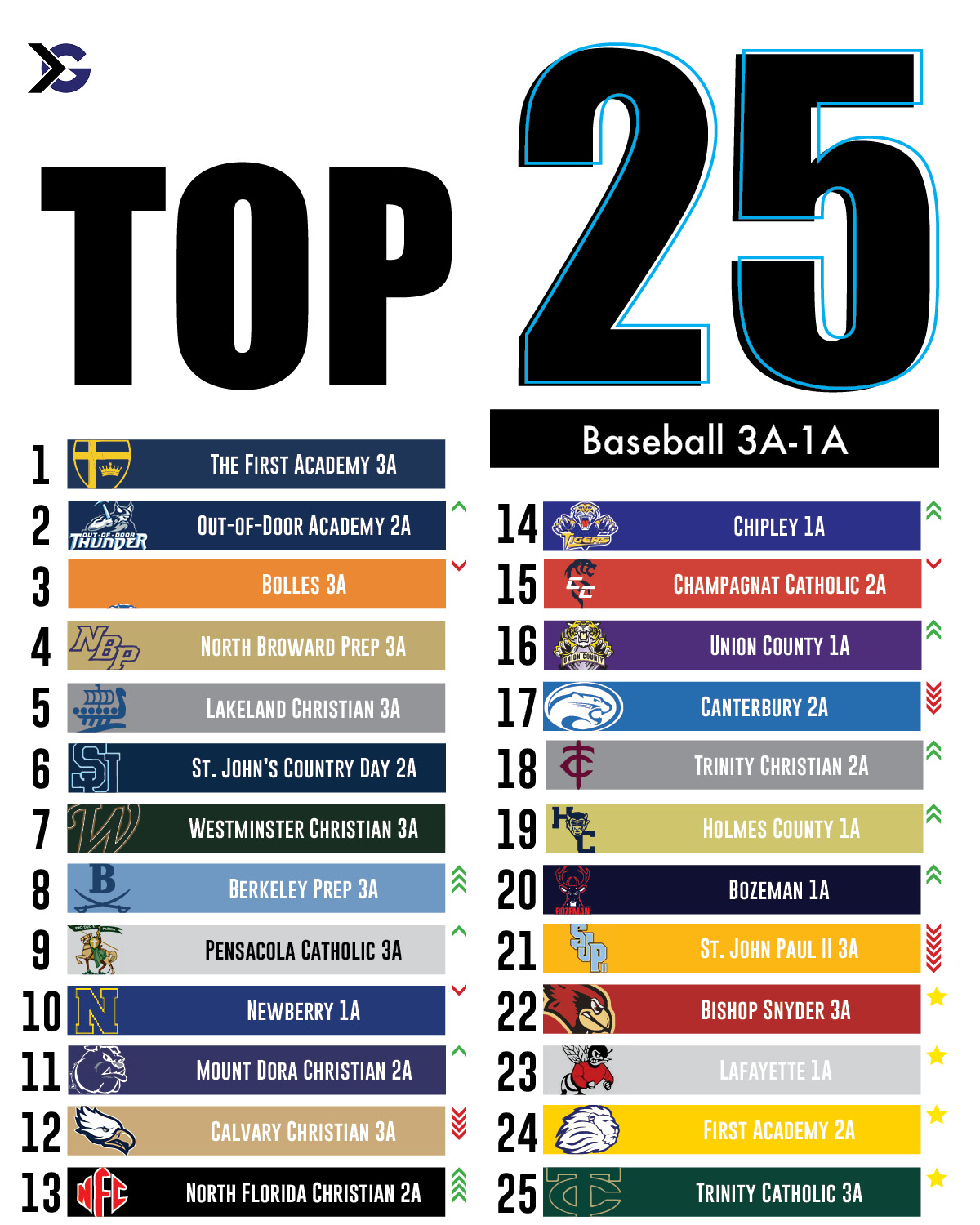 While it is still very early in the 2022 Florida High School Baseball season, our 3A-1A Top 25 receives its first update of the season.

Out-of-Door Academy sees a small rise up to No. 2, while a few teams such as Berkeley Prep and Bozeman are off to strong starts. Four new teams also enter the Top 25 in the first update of the season headlined by 3A’s Bishop Snyder and Trinity Catholic, as well as 2A’s First Academy and 1A’s Lafayette, while multiple other teams are also just outside the top 25 after strong starts to the year. 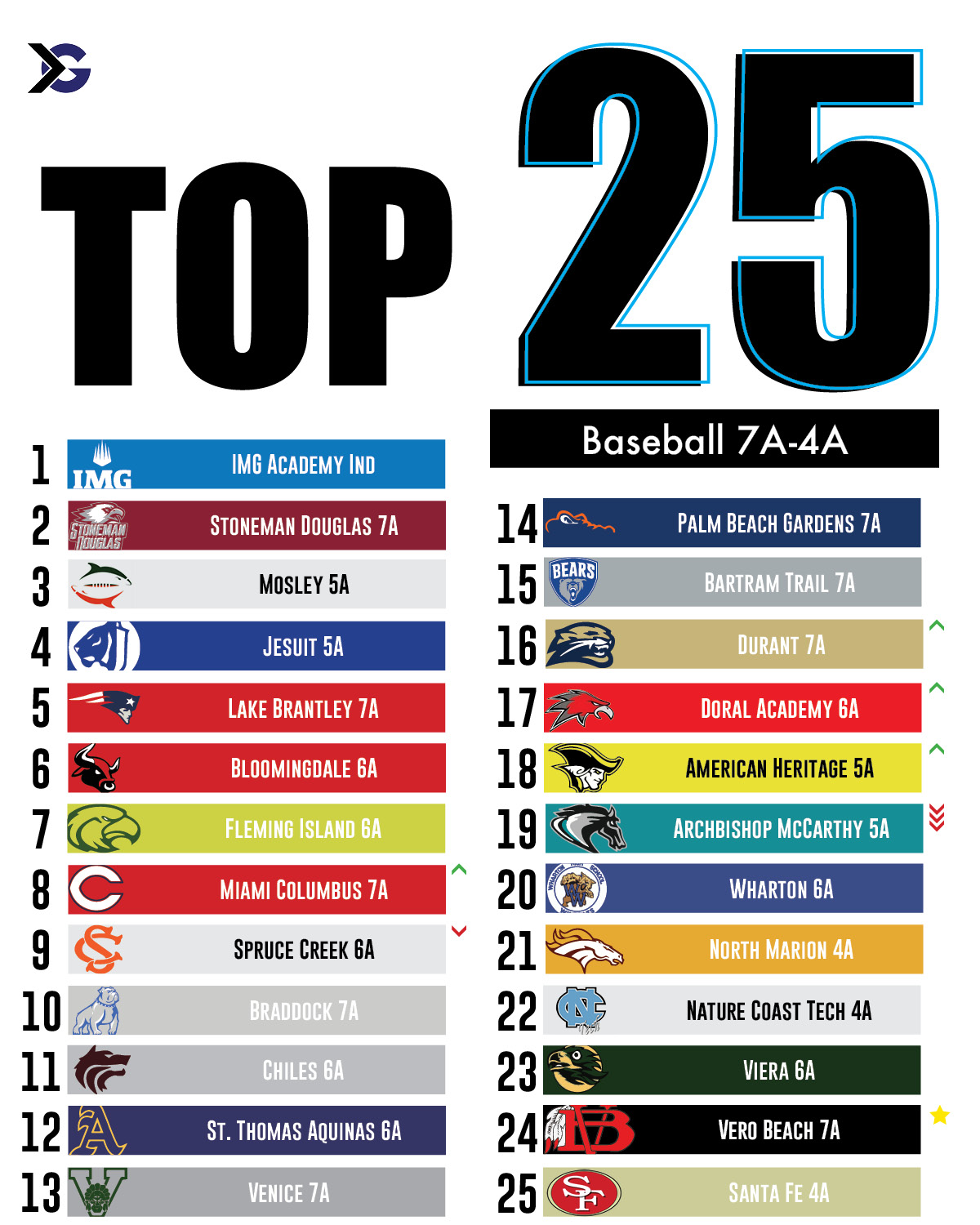 Receiving its first update of the 2022 season, the Florida High School Baseball 7A-4A Top 25 saw a few minor changes this week as the season fully begins.

A majority of the rankings stayed the same with teams having played very few games, but a few teams in particular did however see small rises after strong starts to the year such as Miami Columbus, Durant, Doral Academy, and American Heritage. One new team also entered the top 25 this week as well in Class 7A’s Vero Beach, with the Indians sitting at No. 24 in this week’s update.

With the upcoming 2022 Florida High School Baseball season set to begin next week, here are our preseason Top 25 rankings for Classes 3A-1A.

Defending Class 3A state champion The First Academy enters the year at No. 1, while other defending state champions in Out-of-Door Academy, North Broward Prep (reclassified from 4A), and Newberry also begin this season ranked within the top 10. In addition to this, a few other teams have also reclassified such as Bishop McLaughlin Catholic, while teams such as Westminster Christian and Champagnat Catholic both return two of the top overall players in the state in Sal Stewart and Jurrangelo Cijntje.

As we quickly approach the first pitch of the 2022 Florida High School Baseball season, here are our preseason Top 25 rankings for Classes 7A-4A.

Headlining what is an extremely talented preseason Top 5 overall is No. 1 IMG Academy, arguably the state’s top team from a year ago that returns multiple impact players such as Elijah Green, Jackson Ferris, and Brady Neal. In addition to the Ascenders, defending Class 7A state champion Stoneman Douglas enters the year not too far behind IMG at No. 2, while defending 5A champion Mosley sits at No. 3. Defending 6A state champion Bloomingdale enters the year at No. 6, while a few teams will also be playing in new classifications.