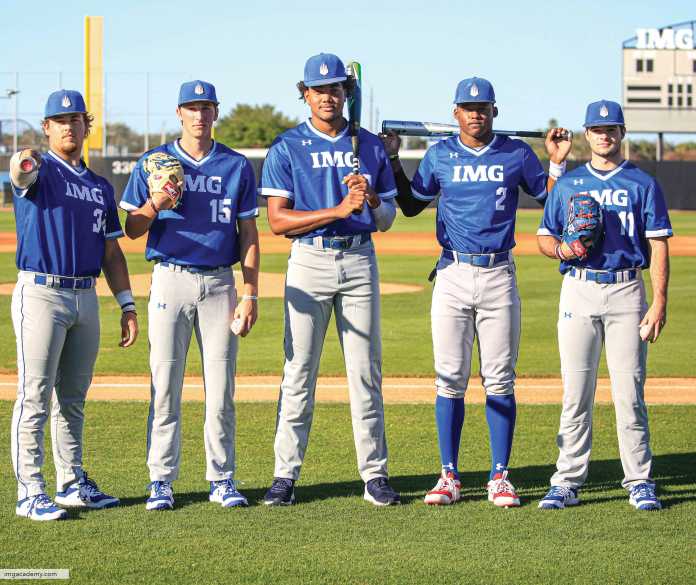 Arguably the top team in the state from a year ago, IMG Academy returns a roster full of talent despite losing key players off last season’s team such as James Wood, Drake Varnado, Tommy White, and Mason Albright. The Ascenders 2022 roster is headlined by the obvious duo of outfielder Elijah Green and pitcher Jackson Ferris, both of whom are considered as two of the top players in the country for the Class of 2022.

Certainly, able to make the case that Green and Ferris are the top overall pitcher and position player in the state, IMG also returns a few other notables in their everyday lineup including catcher Brady Neal and infielder Stone Russell, as well as pitchers Davion Hickson and Blaydon Plain. After a 23-2 record a year ago, the Ascenders should once again be one of the most-exciting teams in Florida, as well as the country this season.

The 2021 Class 7A state champions, Stoneman Douglas returns numerous key players off last season’s team making the Eagles arguably the clear preseason favorite in 7A once again. While Stoneman Douglas did lose a few key players including Gavin Conticello, Chris Mckenna, Rolando Lujo, and Von Smeltzer, the Eagles return a majority of their hitting and pitching production from last season.

Among the Eagles top returning positional players, Chris Arroyo, Santiago Ordonez, Roman Anthony, Jake Clement, and Nikko Benestad each hit over .300 a season ago, while others such as Camron Harris and Grant McDonald were not far behind. Also returning their top three pitchers from a season ago in Christian Rodriguez, Derek Rodriguez, and the previously mentioned Arroyo, it’s clear why the Eagles should be considered as the clear preseason favorite in Class 7A after a 28-2 campaign a year ago.

After a 2021 season that resulted in a 26-3 overall record with a second round loss in the Class 5A playoffs, the Tigers return with a talented roster once again. That however comes with a some notable losses to the roster that include Bradke Lohry, Dominic Castellano, Kris Sosnowski, Cole Russo, Nick Rodriguez, and more.

Jesuit’s returning roster is headlined by notables such as Jack Martinez, AJ Nessler, Wes Mendes, and Jake Kulikowski in the lineup, while others such as Jamie Arnold will help anchor the pitching staff. While the Tigers have multiple prominent players to replace off last season’s team, Jesuit should once again be one of the top teams in the state this season.

The defending 5A state champions, Mosley returns numerous key contributors making the Dolphins one of the clear favorites in Class 5A this season. Mosley however also loses a few notable players off last season’s team including Jaden Rudd, Coleman Rowan, David Hudson, Ethan Campbell, and more.

The Dolphins 2022 lineup will feature many key faces in Tyler Wave, Cole Horton, Rock Holland, and more, while Mosley also returns a few pitchers with previous experience. After a 27-5 season a year ago, the Dolphins appear set as one of the top teams in the state of Florida once again.

The defending Class 3A state champions, you could certainly make an argument that The First Academy is the top overall team in the state entering the 2022 campaign, partly due to returning a vast-majority of their production from a year ago. Going 31-1 last season, the Royals only lose three notable players from a year ago which include infielder/catcher Tyler Hopkins, as well as outfielders Khadin Bastian and Brenden Ryan.

Returning for the Royals is a deep lineup led by seniors Greg Pettay, Ben Barrett, Riley Parker, and more, as well as a pitching staff that returns everyone from last season where they posted a combined 1.20 ERA. It’ll be hard to find a more experienced team in Florida as we enter the 2022 season making The First Academy arguably the favorite to lift the trophy once again.

After a 2021 season that resulted in a Class 3A semifinal loss to eventual state champion The First Academy, Bolles returns some key pieces after losing a notable amount of production from a 25-5 campaign a year ago. Among the players lost, the Bulldogs will have to replace multiple key parts of their lineup in Matt Anderson, Jaden Flowers, and more, as well as two-way player and ace Jackson Baumeister.

Bolles however returns a talented roster that includes impressive two-way player Sully Brackin, as well as others including Tanner Zellem, Luke Cashwell, and Max Haug. While the Bulldogs should once again be an impressive offensive team, Bolles returns almost all of their pitching staff from a year ago which will arguably be the strength for what will be a state title contending team.

The 2021 Class 2A runner-up, St. Johns Country Day should enter the 2022 season as one of the favorites in 2A, even despite losing some key parts of their lineup. Among those losses was infielder Connor Moore who batted .383 last season with 11 home runs, while the Spartans will also have to replace others including James Oman, Luke Shannahan, and Jace Thomas.

Headlining the returning Spartans are a majority of their pitching production from a year ago, as well as two-way player Finn Howell, outfielder Jordan Taylor, and many more. The Spartans will be an exciting team to watch this season, and should contend for a state title once again.

After a 26-2 record a year ago, Lakeland Christian did see notable roster turnover from last season which includes some prominent players in the both the lineup and starting rotation. Among those players lost from last season, the Vikings will have to replace a few notables including outfielders Reese Collins and Ty Evans, infielders Jake Fox and Ryan Jenkins, and pitchers Sawyer Toney and Nathan Shane, as well as more.

Returning for Lakeland Christian will be a lineup led by catcher Brody Donay and infielders Parker Galberaith and Carson Byrd, while Mack Estrada should be the focal point of the rotation. While the Vikings have to replace numerous players, Lakeland Christian returns a few key pieces that should make them one of the top teams in Class 3A this season.

The defending Class 2A state champions, the Thunder return multiple prominent contributors off last season’s team that make them potential candidate to repeat this year. However, Out-of-Door Academy will also have to replace a few key contributors from last season that include Nolan Lewellen, Tanner Fairchild, PJ Fincher, and Tyler Colditz.

Returning for the Thunder will be a rotation that is headlined by Josh Cone, Luke Geske, and Carter Dierdorf, while the lineup also returns key contributors including Logan Tribble, Nolan Naese, and more. After a phenomenal 2021 campaign that sported a 24-3 record, the Thunder appear set to do the exact same once again.

Going 26-4 a year ago, Lake Brantley should enter the 2022 campaign as one of the arguable favorites in Class 7A. After losing notable players from last season including Maverick Stallings, Matthew Delay, and Connor Hensley, the Patriots return a majority of their production from a year ago.

Leading the lineup will be notables such as Luke Heyman, Connor Doyle, Landon Moran, Logan Chapman, and more while the rotation will feature returning players including Savian Loor and Eduardo Adrian. The Patriots have numerous players returning this season, and because of this could be one of the most-experienced teams in Class 7A this season.