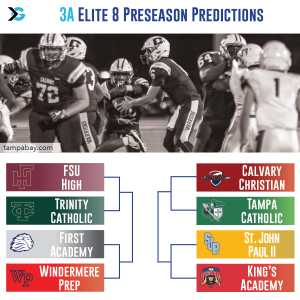 FHSAA Class 3A Predictions: The Elite 8

We make our predictions for who will make it to the Elite Eight in FHSAA Class 3A.

A possible matchup between Florida State University High School and the Trinity Catholic Celtics in the Region 1 final could have some intriguing storylines to it.

The Seminoles were one game away from state last season before losing to the Trinity Christian Conquerors in the regional final. They also return their quarterback from a year ago in senior Tre Donaldson. Donaldson appeared in 10 games for Florida State University in 2020 and threw for over 1,000 yards along with 15 touchdowns, according to MaxPreps.

Trinity Catholic also had a successful season last year, as the Celtics made it all the way to the state semifinal before losing to Trinity Christian as well. Like the Seminoles, they also return one of their leading quarterbacks from a year ago in senior Cole Gonzales. He managed to throw for over 800 yards and eight touchdowns last season.

Will these two teams square off come November? We’ll have to wait and see.