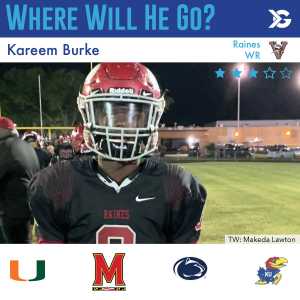 While the football season may come and go, recruiting never stops. And with the NCAA recruiting dead period officially over, high school athletes have started making their way back on college campuses to visit with coaches and narrow down schools they might want to play for. One guy expected to make his college commitment soon is wide receiver Kareem Burke.

Burke is from Jacksonville, Florida, and plays for Raines High School. He is currently rated as a three-star recruit, according to 247Sports. As a junior, Burke appeared in six games for the Vikings last season and had close to 400 yards receiving and three touchdowns. He currently has interest from 17 schools, including Miami, Maryland, Penn State, and Kansas.

He will announce his commitment on June 11.