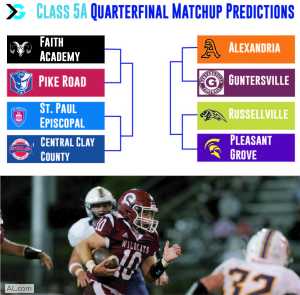 We make our predictions for the AHSAA Class 5A Elite 8. One of the more intriguing playoffs for the 2021 season will be Class 5A. While defending 5A state champion St. Paul’s Episcopal will once again be talented, there are a few other notable teams capable of lifting the trophy at season’s end.

Class 5A runner-up, Pleasant Grove, should return talent after a deep playoff run a year ago, while teams such as Faith Academy and Alexandria will be among the preseason favorites to make a run at a state championship.

Pike Road and Guntersville will look to make a deep run this season after suffering a second-round upset a year ago, while we could potentially get a quarterfinal rematch between St. Paul’s Episcopal and Central-Clay County. St. Paul’s won the meeting between the two teams last year, 27-13.