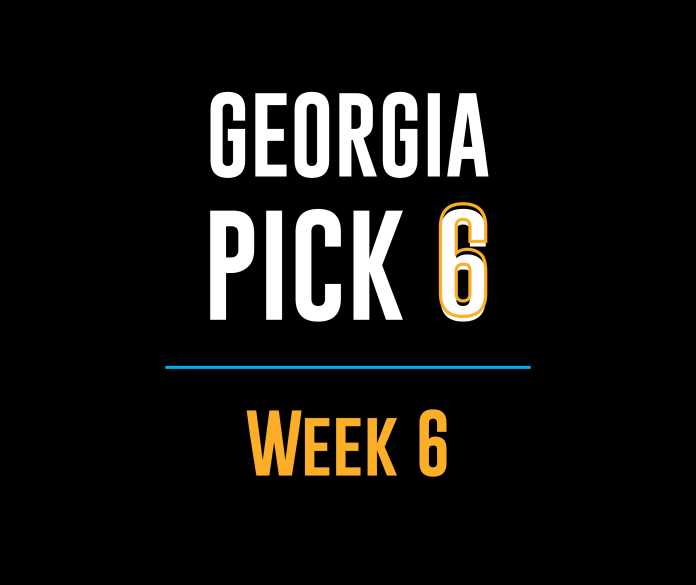 I’m still looking for that perfect week of picks so far this season, but just as teams across Georgia are finding out, going undefeated is a hard thing to do. This week’s games won’t make things any easier for me as we include some fantastic matchups that quite frankly are just too close to call. But I can’t call a tie, so here are my Georgia high school football Pick 6 predictions for Week 6 games, including our ITG Next Game of the Week between Marietta and Buford.

The other games here include a dandy of a contest between the HoCo Bears and Warner Robins. Coach Jeremy Edwards has Bears fans excited about the future of the program, especially with super sophomore quarterback AJ Hill. Then there’s the giant-slayer Cedar Grove Saints trying to play David against Goliath Colquitt County – although some of you may question whether Cedar Grove is that much of an underdog like the biblical David was against Goliath. This is one of those “catch-it-if-you-can” games, because this kind of contest just doesn’t come around often. We finish up our Georgia high school football predictions with Westlake against Collins Hill, Parkview at Mill Creek, and Worth County against Berrien as the top games to watch in Week 6.

ITG Next Game of the Week

Our weekly spotlight game takes us to Northcutt Stadium, where the undefeated Buford Wolves of head coach Bryant Appling take on Richard Morgan’s Blue Devils. This is a complete set up game for Buford: a team that is way better than their record indicates (they’re a sub-.500 team in the win/loss column). Make no mistake, Buford is ranked No. 1 in the ITG Next Top 25 for a reason: They have played very well against some solid competition. But as with any team at any level, they are susceptible for a bit of a letdown. It happens.

The Wolves are undefeated at 4-0 after defeating Carver-Atlanta last week, and they have a number of players who can hurt you. Running back Justice Haynes is a game changer offensively, while KJ Bolden is a standout safety who can line up just about anywhere on the field.

Marietta has one of the best receivers in the state in Christian Mathis, and QB Chase McCravy has done a solid job of replacing former starter Tyler Hughes since coming over from Hillgrove in the offseason. RB Russell Bey is an effective back who can keep the sticks moving. If I’m a Buford fan, I wouldn’t necessarily look past the Blue Devils. They actually led North Cobb at the half a couple of weeks ago and lost a close four-point game to Roswell earlier. A win against Buford could turn the season around for Marietta

The Bears are one of the better stories in high school football this year with an exciting young quarterback overseeing an offense that is putting up points by the bunches, averaging 56 per game. Sophomore Antwann “AJ” Hill Jr., is 6 feet 4 inches tall, which allows him to easily see his talented corps of receivers running open in the secondary. The standout sophomore signal caller will be looking for junior WR Ricky Johnson and RB Ryan Taleb will complement the Bears’ outstanding passing game by churning up yardage on the ground to round out the offense.

Houston County is 4-0 and rested, coming off a bye week as they get ready for their crosstown rival. That would not be just any rival, but the two-time defending state champion Warner Robins Demons, who are going through a rebuilding season so far in 2022. Still, Marquis Westbrook’s team certainly isn’t one to concede anything. This game is one they want to win, and despite what the records say, you can bet the head coach is telling his group that this is where their season turns around. After all, they won this matchup last season quite easily, 49-9. But it’s a different season now, and these two teams are much different teams heading into the 2022 game.

This is one of the biggest games in the state so far in the 2022 season. You can throw out the fact that it’s a 3A team vs. a 7A team – that will not matter in this one. The Saints come marching into the “Hog Pen” at Mack Tharpe stadium with the confidence that they can beat anyone, anywhere. That’s not just bravado, either. Cedar Grove basically has played every game so far this season on the road, as they have an issue with a shared stadium that has left them traveling quite a bit, as they do this week. That makes what they have done that much more impressive, with wins at Bainbridge, Westlake, and Collins Hill, where they destroyed the defending 7A state champions 40-6 two weeks ago.

Despite suffering a setback loss last week against Mill Creek, the Saints play the team that is certainly one of the favorites to contend for a state title by season’s end in 7A this year, Colquitt County. The Pack are coming off a bye week after defeating one of the top 6A teams in the state in Lee County two weeks ago. This game will feature a collection of the best players in Georgia, with Colquitt’s offense showcasing RB Charlie Pace, QB Neko Fann, WR Ny Carr, and TE Landon Thomas. The defense will feature safeties Kamel Bonner and Jack “White Lightning” Luttrell. Cedar Grove has its own crop of standouts with QB EJ Colson, CB Kayin Lee, ATH Barry Jackson, and DE Adonijah Green just a few of the names fans will hear called in this one. Get your popcorn for this one, because Georgia high school football in Georgia doesn’t get any better than this and we certainly wouldn’t leave it out of our Week 6 predictions.

The defending 7A state champions have had a solid season so far – their 2-2 record isn’t anything to be ashamed of – but when you steamroll through the regular season and playoffs like the Eagles did last year on their way to a title, their performance seems to be a bit of a downward turn. The Eagles are coming off a disappointing 33-17 loss against Sandy Creek last week, but a win over the speedy Lions could kickstart the season for head coach Geoff Collins team towards another shot at defending their state title.

Quarterback Mikey Sheehan has played quite well so far, with RB Jacari Thomas and Sharief Pennington carrying the run game. Dion Crawford and Isiah Richardson are two of the top players in the state, and their play on defense has been a huge boost for Collins Hill so far in 2022. Westlake features one of the most exciting young QBs in the state in RJ Johnson. He is a major weapon for the Lions, and the bottom line is that Westlake and first-year head coach Rico Zachary like their chances anytime they have their star QB in the game.

Berrien at Worth County

Our Week 6 predictions continue with this Georgia high school football region opener for two 1-AA teams that are fighting for respect after struggling through a few rough years recently. Many felt this 2022 Rebels team was going to be their best shot at turning things around, and so far that has been the case for Coach Tim Alligood’s Nashville squad. Last year they finished 4-6, which was an improvement over two seasons ago, when the Rebels were 2-9, as well their 2-8 mark in 2019. Those past three seasons also yielded only one region victory as well. But, that’s in the rear view mirror, and Alligood has Berrien fans excited once again with their 3-1 start.

Over in Sylvester, it hasn’t been quite as bad, with the Rams finishing with consecutive 4-6 seasons over the past two years, with just two region victories, both of which came against … Berrien County. Like the Rebels however, Worth County is focused on the here and now. New head coach Jeffrey Hammond has the Rams at 4-0 with an offense that features one of the state’s best QBs you’ve never heard of, Chip Cooper. The unheralded senior has thrown for 3,700 yards in his career, including right at 600 yards so far this season.

Berrien has a good quarterback as well, with senior Gavin Woods running the Rebels offense. He has thrown for 450 yards this year with 5 TDs and just 1 interception. Both teams are coming off bye weeks, so they should be fully rested and ready to go for this game that could mean a program-changing win for the victor.

The Panthers are off to a great 4-0 start under head coach Eric Godfree after experiencing a rare sub-.500 season last year, when they finished 4-7 with just one region win as the No. 4 seed. They’ve already equaled their win total from a year ago and now have a chance to show everyone that Parkview football is back. They also have the chance to avenge last year’s season-opening loss against Mill Creek, which really set the tone for what would be a rough season for the Big Orange faithful.

The Panthers are led by two-sport standout Colin Houck, the senior signal caller for Godfree’s offense. One of the great matchups in this one will be to see Houck going up against the Hawks defense and safety Caleb Downs. Speaking of the Hawks and great matchups, they are coming off a big win against Cedar Grove last week, just when it seemed that no one was going to stop the Saints. They’ll have to get right back up on the horse for this one though, as Godfree and his Panthers would love to hand them  their first loss of the season while staying undefeated themselves. This will be the final non-region contest for both teams as they get ready for the run to the playoffs next week. But, region game or not, this promises to be a good one. Who ya got? Here’s my pick in the final Week 6 game of our Georgia high school football predictions: