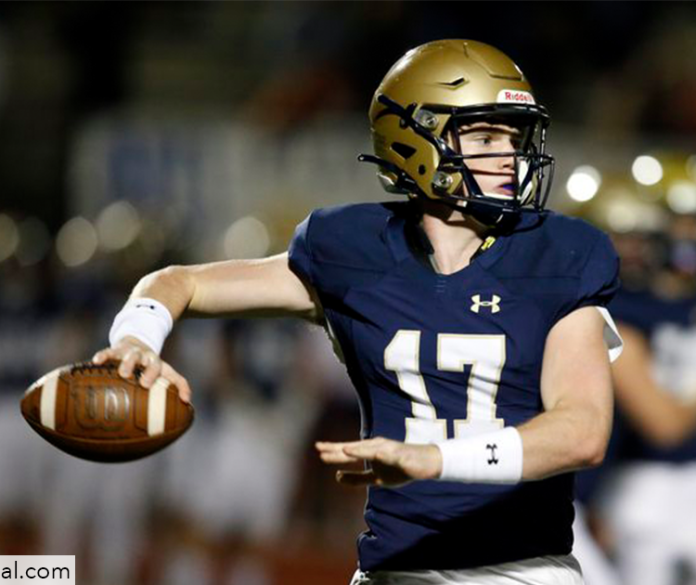 The state of Alabama has had some phenomenal recruiting classes in recent years, which included a few notable highly rated quarterbacks that have gone on to have success at the next level. When looking at recent quarterback recruits from the state, there are arguably none better than what we are seeing in Alabama high school football this season.

When looking at the five current highest rated quarterback recruits in the state of Alabama, this group is arguably the best in years, with each having potential to make a significant impact at the next level. Here is a short look at those five, each of whom is dominating Alabama high school football this season.

The state’s top quarterback recruit, Tanner Bailey has starred at Gordo since the 2018 season. Now a senior, Bailey entered the 2021 campaign having thrown for a combined 6,200 yards and 71 touchdowns, which included a Class 4A runner-up finish a year ago, despite missing part of the season due to injury.

A four-star prospect, Bailey is committed to Oregon and is rated as the No. 11 player in the state of Alabama.

After leading Fyffe to a Class 2A state championship as a sophomore, Zach Pyron transferred to Class 6A’s Pinson Valley a year ago. Leading Pinson Valley to a 6A state title, Pyron enjoyed a phenomenal junior season, accounting for over 2,500 total yards and 26 touchdowns.

A three-star prospect, Pyron is rated as the No. 20 overall player in the state of Alabama and recently committed to Georgia Tech in early October.

The state’s top quarterback from the Class of 2023, you could certainly make an argument that Christopher Vizzina is the biggest riser among the state’s quarterback recruits this season.

Rated as a three-star prospect, Vizzina is currently ranked as the No. 15 player in the state of Alabama in the Class of 2023 and has led Briarwood Christian this season to one of the top teams in Class 6A. Vizzina is currently uncommitted, but has offers from multiple schools.

The starting quarterback for one of the state’s top teams, and arguably the top team in Class 6A, Johnson has had a phenomenal season so-far for Clay-Chalkville. A three-star prospect, Khalib Johnson has led the Cougars to an undefeated start to the season, passing for 1,130 yards and 17 touchdowns across the first six games of the 2021 campaign.

Rated as the No. 27 overall player in the state of Alabama, Johnson is currently committed to Louisville.

The 2020 7A Back of the Year, Harrell accounted for almost 4,000 total yards and 47 touchdowns a year ago for the 7A state champions. Enjoying similar success so far this season, Harrell has thrown for 1,635 yards and 23 touchdowns across undefeated Thompson’s first seven games of the season.

Rated as a three-star prospect, as well as the No. 28 overall player in Alabama, Harrell is currently committed to North Carolina.