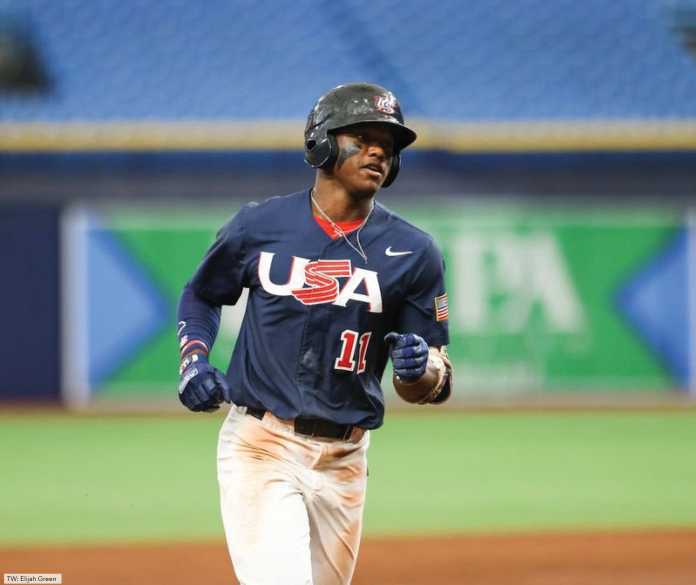 Not only is Green regarded as arguably the top overall player in the state of Florida, but the outfielder is also regarded as one of the top overall high school baseball players in the country. A Miami commit, Green is considered as one of the top overall prospects in the 2022 MLB Draft, and is likely to be selected among the Top 5 picks overall. A strong defensive outfielder at IMG Academy who displays excellent speed and power offensively, Green appeared in 25 games a season ago with the Ascenders where he slashed .321/.449/.666 with six home runs, 21 RBI’s, and 10 stolen bases. Green is also rated as the No. 2 high school prospect for the 2022 MLB Draft by MLB Pipeline, as well as the No. 1 overall player in the Class of 2022 by Perfect Game.

One of the top pitchers, if not the top pitcher, in the state of Florida this season, Barriera is also regarded as one of the top overall high school pitchers in the country. Committed to Vanderbilt, the left-hander is considered as a high pick in this year’s MLB Draft, likely going anywhere in the first round. Making three starts last season for American Heritage, Barriera posted a 2-0 record with a 0.00 ERA across 16 innings with five walks and 26 strikeouts. Displaying an impressive fastball and slider, Barriera is rated as the No. 7 high school prospect in the 2022 MLB Draft by MLB Pipeline, as well as the No. 8 over player in the Class of 2022 by Perfect Game.

Ferris is not only regarded as arguably the top high school pitcher in the state, but one of the top pitchers in the country overall. Currently committed to Ole Miss, is considered as a first round pick in this year’s MLB Draft, likely anywhere in the first round. Pitching 50.2 innings for the Ascenders a year ago, Ferris posted an 8-0 record with a 0.55 ERA with 13 walks and 86 strikeouts. Sporting a solid fastball and breaking ball, Ferris is rated by MLB Pipeline as the No. 8 high school prospect for the 2022 MLB Draft.

One of the top home run hitters in the entire country, Stewart you could certainly argue is the top hitter in the state of Florida. A Vanderbilt commit, Stewart is a player who could be selected in either the first or second round of this year’s MLB Draft. The third baseman appeared in 31 games last season for Westminster Christian where he slashed .534/.667/1.306 with 17 home runs, 40 RBI’s, and eight stolen bases. Rated as MLB Pipeline’s No. 16 high school prospect in the 2022 MLB Draft, Stewart is one of the more interesting players in the state due his powerful right-handed swing.

Arguably the state’s top catcher, Neal reclassified into the Class of 2022 after a phenomenal sophomore season a year ago. An LSU commit, Neal could be selected anywhere early-on in the 2022 MLB Draft with the first two rounds likely. Neal appeared in 22 games a year ago with the Ascenders where he slashed .371/.446/.612 with two home runs and 22 RBI’s. A strong two-way catcher, Neal is likely set for a massive 2022 season, and should be one of the top hitters in Florida this season.