The baseball season has stopped this spring, with players and teams unable to practice or play due to the COVID-19 pandemic. While players remain optimistic to finish their seasons, we could view 2020 as the lost season of baseball.

Jaden Woods was ready to take on the world his senior season.

Blessed with a 90 MPH fastball, a mid-70s slider, and also showing great speed and ability from the outfield, he was one of the major reasons that Houston County baseball had a lot of hype in 2020. Only now, they may never get the chance to live up to that hype.

Governor Brian Kemp announced on Thursday that all K-12 schools in the state will remain closed until April 24 due to the COVID-19 pandemic. That includes all after school activities such as athletics. There’s a chance that this becomes the lost season for spring athletics. The NCAA has already cancelled spring sports for the season, as it is deemed unsafe to play.

Woods is trying to stay focused despite the chance of cancellation.

“I’m throwing three days a week still,” Woods said. “Plus hitting every other day and in the bullpens once a week. It’s not nearly as much as what we were doing with practice during the season, but it’s enough to keep fresh for the season.”

Woods, Houston County, and all of the high schools in Georgia are in a sort of waiting game right now. No official announcement has been made from the GHSA, so Woods said that Bears coach Matt Hopkins continued to reiterate to the team the importance of staying conditioned and staying prepared.

“Nobody knows for sure,” Woods said. “So we know we have to be ready for anything and try to stay prepared so we can get off to a good start if the season comes back.”

The Bears were rated No. 3 in the state coming into preseason, but had a slow start due to a difficult travel schedule before the break, and sat at 6-6 on the season. They were getting set to enter region play and felt like this could still salvage and put together a special season.

“We had a lot of talent across the field; we could’ve made a deep run,” Woods said. “We had all Division I players in the outfield and a great team overall. If the suspension ends, my top goal is to be more thankful for the game and focus on enjoying the little things and enjoy the game.”

Woods is still on a positive track, as he is set to enroll at the University of Georgia next season on scholarship, but there are many athletes who are stuck in a bind due to the pandemic. Senior season is when a lot of high school athletes get a chance to prove themselves on the field, and many are battling for college scholarships.

Of course, that won’t change the severity of the situation. As the virus rages on, staying safe is more important than any game. Thinking about these kids and what they are missing out on makes it all the more difficult. Woods said he didn’t think about it until much later on.

“It really hurt at first,” Woods said. “I felt like my season would be taken away from me or from the team. My coach always said, ‘Play every play like it’s my last play,’ but I never actually envisioned this being my last play. If it’s my last game, I’d like to thank Houston County for watching me grow into a man and growing up and gaining a lot of life and baseball experience from my time being a Bear.”

We’ll continue to update everyone on any announcements from the GHSA on the COVID-19 pandemic. 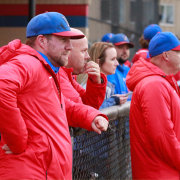 Failing Is Part of the Game

Top Florida Athletes of All Time
Scroll to top