The Financial Impact of No Football

It’s no secret that football is king in the South, especially here in Georgia. Fans enjoy the game for the excitement and camaraderie, but the financial impact of football on all sports can’t be overlooked. Here’s a look at how limiting the number of games, the season as a whole, fan attendance, and other restrictions could have a major financial impact on programs nationally and here in Georgia.

Guaranteed Games: Smaller, start-up, and other non-major conference teams depend heavily on guaranteed games, which are games against larger, more established football programs that guarantee a big payday for the smaller schools agreeing to come in and, usually, take a lopsided loss.

$5 million Dollars: That’s the amount Kent State was expected to collect this season in guaranteed pay-outs for agreeing to play at Penn State, Kentucky, and Alabama.

$100 Million Dollars: That’s the minimum amount that the University of Wisconsin estimates they will lose this year by not playing football.

With the prospect of high school football moving forward this season, there still remains the reality of major financial impact to the schools’ athletic budgets. Here are some numbers to consider:

That’s the average stadium capacity that most Georgia high schools will limit fan attendance to.

That’s the range of revenue that most Georgia high schools collect from gate ticket sales.

That’s the maximum number of fans that the University of Georgia will allow this season at home games.

Teammates Have Become Like Second Family to Freshman, Jack Little 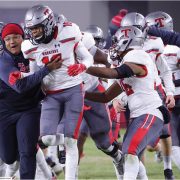