I could not, however, have been more wrong.

Softball season is in full swing right now, pun not intended. While the eyes of the South Georgia sporting world are on the various football stadiums around our communities, we have hundreds of girls suiting up and taking to softball fields all over the place. They play in cold weather, hot weather, and wet weather. They play or practice seven days a week, pitching, hitting, running, even lifting weights.

And some of them are among the best softball players in the state.

As I watch softball, what impresses me is the speed of the game. Baseball’s biggest knock is that it’s slow. And while measures have been taken at every level to speed up the game, it’s still a slow, methodical activity. Softball, however, is played with a shot of adrenaline. The field is smaller, basepaths shorter, distance from mound to plate significantly less, pitching motion and trajectory of a pitched ball quite different. And all of that must be taken into account when formulating a game strategy.

The first and most obvious difference to me was smaller size of the field – outfield fences in the 200 foot range, 60 feet between bases, and 40 feet from mound to plate for high school. The pitching motion is also very different – overhanded from an elevated mound in baseball, underhanded from a flat mound in softball.

The underhanded pitching motion in softball is a much easier on a pitchers’ arm than the baseball motion. Softball pitchers can pitch two games of a double-header, nearly every day. Whereas a baseball team needs a staff of five starters and a healthy bullpen, a softball team can get away with one dominant pitcher and a couple of others who can throw a little to give the starter a break.

Coaches in particular have to allow for the shorter, more compact field. Base running strategy differs between the two sports; softball players move between bases in about three seconds. When base runners steal (which they must do without taking a lead from a base), it takes less than three seconds for speedy players. All of that must be taken into account. And if a coach takes a traditional baseball approach to softball, they often receive a few harsh lessons in the fallacy of such a game plan.

From an offensive standpoint, the two sports have a different approach to hitting, primarily because of the trajectory of the ball. In baseball, the ball is coming from an elevated platform down to the batter. With softball, the pitcher throws from the same level as the batter. As such, the natural trajectory of the ball is to go from low to high. Good pitchers are able to alter the trajectory and throw a variety of pitches, including those that rise significantly, drop off the table, and move right and left.

What is the result? A fast, high-energy game that takes tremendous skill and athletic ability to play. Softball players need quick hands, sharp eyes, and fast feet. When the ball is in play, things happen in a hurry – more so than in baseball.

Softball, along with soccer and basketball, is a major sport for young ladies in our area. It’s a big-money sport – players, parents, and teams readily open their wallets for equipment, uniforms, tournament entry fees, travel, and the various other expenses that accompany a year-round sport.

It is out of that commitment that the game has grown tremendously in our area. These girls are as dedicated as any football or baseball player you will find anywhere. It’s a fun game to watch and an even more fun game for the girls to play. If you haven’t seen a softball game recently, head out to the ballpark and take one in. I promise you won’t be disappointed. 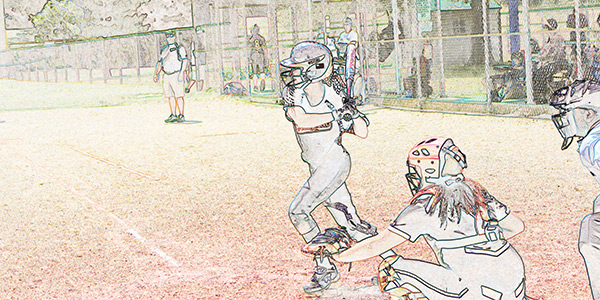 Softball is NOT girls’ baseball