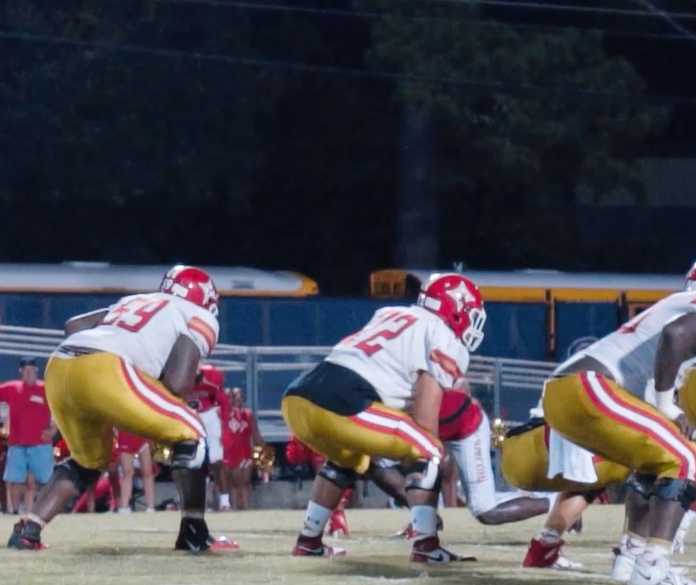 Bainbridge running back Keenan Phillips rushed for 144 yards on 17 carries with 4 TDs, including a 70-yarder. His efforts helped the Bearcats defeat Burke County 44-0.

Hughes quarterback Prentiss “Air” Noland and the Panthers offense exploded in Round 2 of the Georgia high school playoffs – he tossed 6 TD passes and had 302 yards through the air while completing 10 of 11 attempts in just the first half of his team’s rout of North Forsyth.

Houston County running back Ryan Taleb had 37 carries for 286 yards and 3 TDs to help lead the Bears to a second-round playoff win.

Fitzgerald running back Jaylon Kilgore had 18 carries for 164 yards rushing with 2 TDs, and he threw for another to lead the Purple Hurricanes to a playoff win over Putnam County.

Pierce County running back DJ Bell had 10 carries for 278 yards and scored 4 TDs. He also passed for 99 yards and a TD.

Houston County was led by a pair of outstanding defensive efforts in Round 2 of the Georgia high school playoffs. Nick Jordan had an interception return for a TD, as well as a fumble recovery that he returned for another score. Arthur Brown had 2 interceptions, including one he returned for a TD, and he had 6 tackles with 2 TFL.

Hughes senior cornerback Jekail Middlebrook had a 42-yard INT return for a TD to contribute to his Panthers’ 77-16 win over North Forsyth.

Thomasville senior linebacker Kam Bradshaw had 12 tackles and a sack to lead the Bulldogs defensive effort in their win over Liberty County.

Milton safety Rob Billings blocked a Norcross punt in the end zone, resulting in a safety and 2 points for the Eagles. The Milton senior is committed to Clemson.

Westlake kicker Omar Camara kicked a 42-yard field goal with less than a minute remaining and his team trailing Parkview 28-27, giving the Lions a narrow win over the Panthers.

Woodward Academy kicker Hudson Hanges was successful on 3 FG attempts, connecting twice from 47 yards out and 25 yards, and he was 2-for-2 on PATs to help his team defeat Lee County and move on to the quarterfinals of the Class 6A playoffs.

Calhoun kicker Carlos Lopez was 2-for-2 on FG attempts of 22 and 27 yards, and he was 4-for-4 on PAT attempts to help his Yellow Jackets defeat Kell 34-7 in Round 2 of the state playoffs last week.