NCAA’s Lack of Leadership Risks Everything 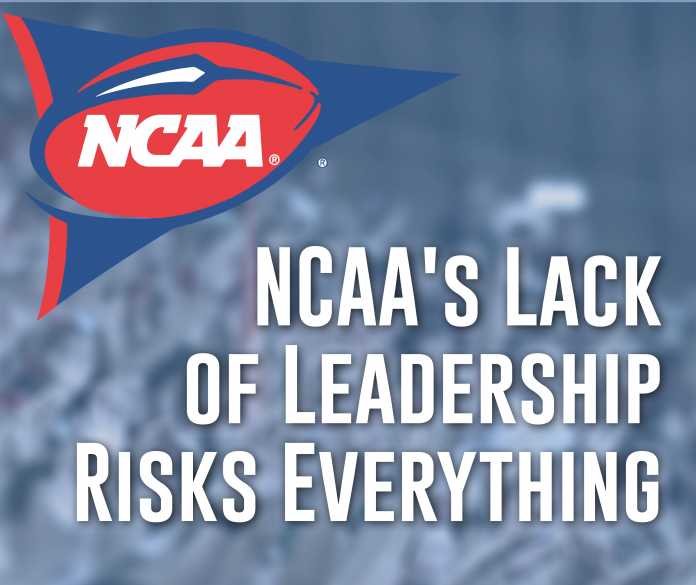 It’s sink or swim time in the world of sports, and with many professional leagues moving forward, the NCAA continues to step back. It’s time for college sports to have someone in charge for the safety and betterment of student athletes.

Everyone is finding a way to move forward in the world of sports with COVID-19. Heck, even baseball figured it out eventually when it seemed like the MLB couldn’t agree on anything. All of these organizations found the leadership to move forward and accept the risks. One organization that hasn’t figured that out yet is the NCAA.

At this time, the Ivy League has already begun plans to push all fall sports back into the spring. Keep in mind that the Ivy League was also the first to cancel their basketball conference tournament until eventually everyone followed suit and cancelled the NCAA Tournament altogether.

Following the Ivy League, two of the largest conferences in the country, the PAC 12 and the Big Ten, both made the decision to move to a conference-only schedule. There were two major reasons for this decision. First, it limits the travel for all of the teams in the conference. Ohio State was supposed to travel to Oregon, and other non-conference games have been scrapped.

The other reason is the most important and speaks volumes to what exactly is wrong with the NCAA. With no commissioner for the NCAA, many conferences are built to set their own rules and regulations. Many of the conference and school leadership groups were worried about the testing and safety regulations of the other conferences, and thus decided to close themselves off to other teams with less resources.

For example, the University of Michigan is the winningest football program in college football history. With their reputation and the TV money generated by the Big Ten conference, it was reported that the Wolverines football program brought in about $122.3 million in 2018, their latest reported numbers. Projections before the pandemic had them making nearly $200 million. On Michigan’s schedule this season was Ball State, out of the MAC conference, which reported about $27 million in total NCAA athletic finances in 2018, according to USA Today. Michigan’s football program brings in nearly $100 million more than Ball State’s total athletic program.

Those are all rough numbers and don’t include the athletic expenses and total profit margins, but one can safely assume that Michigan has more money and resources for testing and the safety of their coaches and players than Ball State. Would it be wise for Michigan to allow Ball State into their facilities without knowing if they were getting the adequate safety and testing options beforehand? This was an easy decision for the Big Ten to make.

Which brings us to the issues of the NCAA. All professional sports leagues have a commissioner to overhead decisions and set mandated, necessary restrictions. The NCAA largely leaves that up to the individual conferences. Without leadership, the NCAA has no power to make the decisions to protect all student-athletes.

The solution is simple: The NCAA needs a commissioner in place. If that were already in place, each school would have strict testing policies that programs would have to follow to participate. Now, the 2020 college football season is in jeopardy. The committee is quick to set sanctions for student-athletes who sell their own memorabilia, but cannot have a governing body to keep them safe in the times of a pandemic.

These actions constantly put them under scrutiny, and now it may cost the players a season altogether. While the world strives to move forward, the NCAA continues to knock itself backward.