With a reserved demeanor, Braden Barkley is quietly making his mark in competitive youth swimming.  He has been swimming as a member of the Greater Pensacola Aquatic Club (GPAC) for six years, but in the last 18 months, he has broken out of the pack.  He was ranked in the top 10 nationally for 12-year-old boys in the 1500-meter freestyle this past May.  Braden is aiming to improve his times through stringent training and competition this summer.

Possessing a work ethic that far surpasses his age, Braden trains at the University of West Florida Aquatic Center at 6 a.m., six days a week.  It’s not hard to see where Braden derives his work habits; his parents Karla and Jerry Barkley, make sacrifices to ensure he is where he needs to be.  Mom, a physical therapist at Sacred Heart Hospital, and dad, retired military, currently working with Boeing, are as dedicated to the sport as Braden.  GPAC coaches brag how he shows up and goes to work without a complaint.

Braden moves effortlessly through the water like a fish.  When asked how he got into swimming he mildly shrugs.  Karla says she swam when he was younger, but the main reason she got Braden and his older sister Karoline into swimming was the family’s initial move to Pensacola and her fear of the potential for kids to drown in the Gulf of Mexico.  Braden also says his mom can occasionally be heard over the crowd but is very grateful for his family’s support.

When asked what he loves about his sport, Braden says his teammates.  Being part of something bigger than himself and the mutual support the team shares is one of his biggest joys.  “Braden is a great teammate,” says GPAC coach Greg Johnson.  “He respects and is respected by everyone.” Spending time at the pool with his fellow swimmers and making the trips to away swim meets is also fun, according to Braden.  He prefers distance swimming, and at Zones Open Water Championships in North Carolina, he finished eighth in the 2-kilometer open water race.  It just happened to be the first time he competed in an open water event.

In a lot of respects, Braden is a typical 12-year-old.  A rising seventh-grader at Episcopal Day School, you can find him playing basketball and soccer with his friends, and he confesses to watching YouTube videos when he’s just hanging out.  With his dad, he is mastering the sport of archery.  Together, they set up targets in the yard for practice.  He is looking forward to the chance to take his bow into the woods and aim for a buck.

Braden says he tries to get better each day. He understands that he can only improve through hard work and by continuously trying.  He feels Coach Johnson helps motivate him on those days he might be struggling and provides the influence to keep pushing onward.  “He makes it fun for us with his goofy humor,” Braden says.  Laughing, Braden adds that his coach comes up with all sorts of quirky remarks to keep things light.

When asked what the future holds, Braden shyly mentions the possibility of making the 2024 Summer Olympic team.  He plans to continue swimming through high school.  He is not certain which university he would like to attend and swim for, but he has aspirations of becoming an engineer.  Although he did not make his goal to make the Southeastern Zones Team, at the end of summer, he still took first place in 11- and 12-year-old boys in the 400- and 800- meter freestyle recently held in Knoxville, Tennessee.  He has set his expectations high.  Braden, his family, and his coaches all fully expect him to achieve them.

As soon as he enters the water, Braden flips a switch and is all business.  He has developed a mental toughness you do not see in athletes twice his age.  He is happy not drawing attention to himself unless it is for his performance in the water.  Even when he outperforms everyone else, Braden possesses an aura of humility that is inspiring.  Who knows what the future holds for him, but for now he can be found at the pool, six days a week at 6 a.m., swimming silently toward his goals. 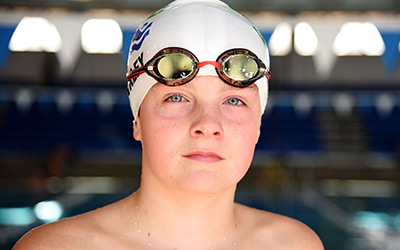 A Cheerleader's Game Day on the Emerald Coast

A Race Through the Red Sea