IMG Academy: The Good, the Bad, and the Ugly 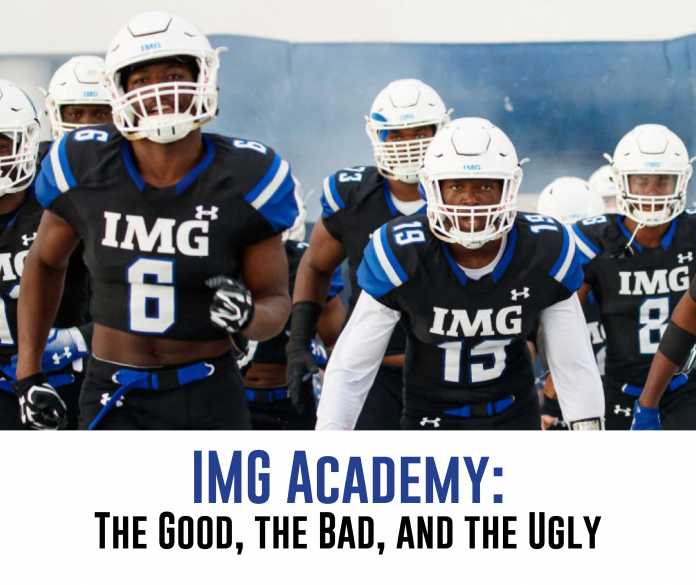 Is IMG Academy Good for High School Sports and Athletes?

IMG Academy is a private boarding school located in Bradenton Florida. It’s origins were based in tennis instruction as the Nick Bollettieri Tennis Academy, founded in 1978 by its namesake. It became known by its current name when sports and entertainment company IMG bought the academy in 1987. They added golf, hockey, and basketball to go along with the existing tennis instructional programs.

While most people associate IMG with football, it wasn’t added until 2010. Despite being the newest sport added, football’s popularity made it the driving force behind IMG Academy’s rapid growth though the years. The instructional academy and boarding school campus has expanded from its original 190 acres to its current nearly 600 acres, with future expansion in the plans. Reports have IMG Academy having purchased an additional 134 acres of surrounding property.

With IMG Academy rolling right along as simply a boarding school where parents could send their children to train in their particular sport of interest, the concept seemed straightforward and above board: Student-athletes become better athletes, and in some cases elite, as they spend the majority of their days not in the classroom, but on the pitch, course, court, or field.

They see a program that has a huge competitive advantage over most other high school football teams. For one, IMG Academy’s daily schedule for its players is completely opposite of traditional high school programs. While the traditional high school football player attends classroom instruction for most of the day, then attends football practice for a couple of hours at night, IMG Academy has their student-athletes focusing on football during the day. Their curriculum is available online.

Then there’s the issue of funding. IMG Academy is a private school with virtually unlimited budget, while other high schools have to play within the confines of district budget guidelines. This allows IMG several advantages, including travel, training, nutritional programs, and marketing of the athlete to colleges.

There are drawbacks to attending and playing football at IMG Academy. The facility is not a sanctioned member of the FHSAA, thus isn’t eligible for the state playoffs or a state championship. The Ascenders (IMG’s mascot) play mostly 10-game schedules and try to schedule games against similar up-start performance facilities from other states.

So much of the IMG model doesn’t necessarily seem to line up with the traditional high school football landscape, including actually attending high school.

For now, IMG Academy continues to play high school teams in the Sunshine State and beyond, and the wins just keep coming.