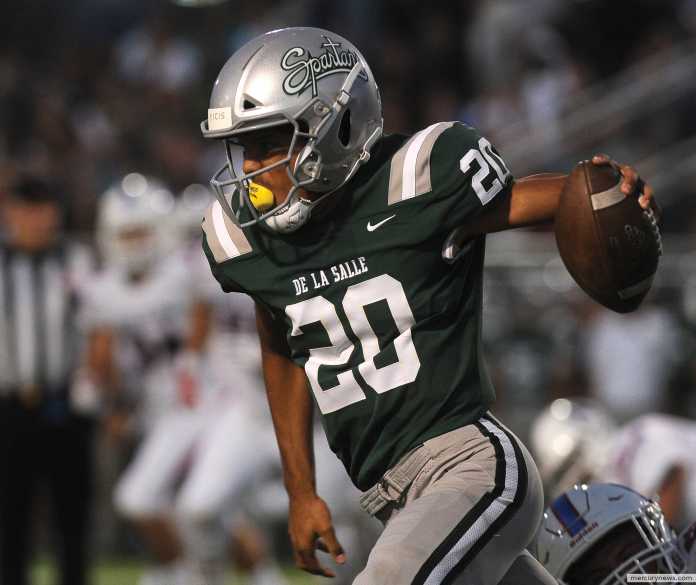 It took 30 years for De La Salle (CA) to compile a 318-game unbeaten streak against California football teams north of Fresno. They last lost to a region opponent in 1991 against Pittsburg and have since rattled off 316 wins and two ties.

This is not the first time a nationally recognized streak has fallen for De La Salle football. In 2004, Bellevue (WA) ended the Spartans’ national record 151-game unbeaten streak in Seattle in front of a large crowd at Qwest Field. Seventeen years later, another De La Salle streak has fallen.

The Spartans’ 2021 loss came at the hands of St. Francis (CA), a team who had lost to De La Salle 48-0 just two years prior. Unlike that 2019 matchup, the Lancers got off to a quick 24-7 start on the back of two Tim Netane touchdowns.

The Spartans didn’t go down easy, however. On the kickoff after St. Francis’s 24th point, Zeke Berry sprinted 94 yards to the house to cut the deficit down to 10. And with just three minutes remaining in the third quarter, a short quarterback sneak brought the Spartans within 3. De La Salle had regained momentum quickly, and their streak seemed safe.

Around halfway into the fourth quarter, De La Salle knocked on the door of the goal line at the St. Francis 5-yard line. With the opportunity to take their first lead of the night, the Spartans fumbled. St. Francis couldn’t make much out of the poor field position, and the Spartans regained possession soon after.

This time, De La Salle didn’t waste a chance at scoring. They quickly marched into the Lancer redzone and scored from 6 yards out with the legs of AJ Bianchina. The Spartans had scored 21 unanswered points to take the lead with 1:38 left in the ballgame, but they had left too much time for St. Francis.

Instead of starting their final drive through the air, St. Francis chose to put the ball in the hands of Viliami Teu, who scampered for 27 yards into Spartan territory. On the next play, Andrew Adkison hauled in a 33-yard bomb and fell short at the 1-yard line, setting up a photo finish for Teu, who had carried the ball for 213 yards so far on the ground.

However, Teu would never get the chance, as an unsportsmanlike conduct penalty pushed the Lancers back to the 16. With under 20 seconds remaining, QB Matthew Dougherty Jr. rocketed a pass over the middle to Nicolas Andrighetto. Touchdown, Lancers!

The loss was certainly shocking for the Spartans, but it has been characteristic of how the 2021 season has gone for nationally-ranked teams. Just last week, St. Thomas Aquinas (FL) was stunned by Jesuit (FL) 24-21. At the same time as the Spartans-Lancers matchup, No. 9 North Shore (TX) fell to Westfield (TX) 27-21. If this trend continues, the 2021 high school football season could be one of the most exciting and record-breaking seasons of all time.