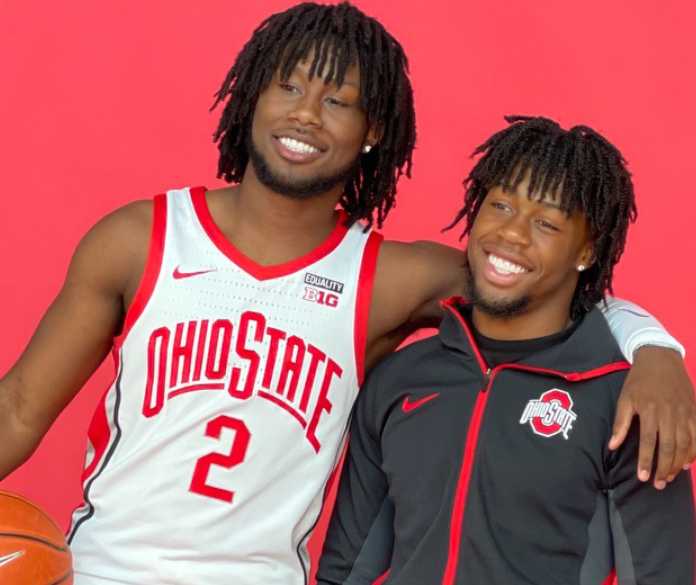 Bruce Thornton and Bryce Thornton attend Milton High School, and each one has made his mark in a big way.

Bruce is a four-star point guard for the basketball team at Milton and was recently recognized as the Georgia Gatorade Player of the Year, as well as being named by the Atlanta Tip Off Club as Mr. Georgia Basketball. Both awards go to the player generally recognized as the top hoops player in the state.

Bruce’s stats for his senior season represent what a complete player he is: 17.2 points per game average, 7.7 rebounds per game, and 7.5 assists.

“He impacts the game more than any other player I’ve ever coached against,” said Etowah Head Basketball Coach Jason Desinger.

Bruce’s brother Bryce is a standout defensive back for the Eagles football team and currently has 32 D-1 offers to consider. The schools that have offered Bryce include Alabama, Georgia, LSU, and Florida, and that number will surely rise over the next few weeks.

With his senior season coming up, Bryce has 155 tackles (94 solo) to his credit, plus eight interceptions, including two picks returned for a TD. He also has recovered two fumbles. On offense, Bryce has 59 carries for 368 yards with two TDs, 10 receptions for 177 yards and one receiving TD. On special teams, he averaged 20 yards per kickoff return.

The fact that Bruce and Bryce Thornton are so athletically gifted makes perfect sense. Their parents were both Division-1 collegiate athletes, starring for separate teams at the University of Georgia. Their mom, Tiaunna Briggans, played basketball for the Lady Dogs, while their father, Bruce Thornton, played for the Bulldog football team. He also went on to play in the NFL.

Like their parents, the brothers will both be playing collegiately. Bruce has already committed to Ohio State Universityto continue his basketball career, while Bryce is still deciding on which college or university to sign with.

There are obviously a lot of similarities when you look at the parents and their sons. Bruce and Bryce were born just 14 months apart. Bruce is the oldest. According to their mom, both brothers grew up always wanting to play sports.

She said that her mother bought Bruce a Lil Tykes basketball hoop, and he was instantly drawn to putting balls and anything else through the toy hoops.

“If he didn’t have a ball nearby, he would go grab eggs and start putting the eggs through the basket,” Briggans said.

Obviously, Bruce’s love for basketball started early, and it wasn’t limited to physically putting balls, and anything else, through the hoop.

“We were living in Dallas when Bruce was four years old, and he could name every member of the Dallas Mavericks,” Briggans said.

Bryce naturally wanted to do everything that his big brother did. That meant playing the same sports that Bruce was playing. The family moved to Georgia in January of 2006, and Briggans immediately registered her young boys to play sports in one of the local Atlanta youth sports leagues.

“They learned how to start dribbling the basketball at two and three years of age,” Briggans said.

That eventually turned into games on Saturday, and that’s how they learned to play basketball. Then, the brothers went to t-ball and then to football. When Bruce turned eight, and Bryce turned seven, they played AAU basketball together. Both continued to play football as well, for a little while, at least. Bryce also ran track in the summer, while Bruce focused on basketball in the summer.

The brothers began to form their separate sports identities around middle school.

According to Briggans, when Bruce entered the eighth grade, that’s when he decided to stop playing football and focus strictly on basketball.

Bryce, on the other hand, decided he wanted to concentrate only on football, and upon entering the ninth grade, stopped playing basketball. But, Briggans tried to convince Bruce that, like his brother, he still had a future in football.

“I really wanted Bruce to compete in both football and basketball, because you never know what’s going to happen,” Briggans said.

So, at his mom’s urging, Bruce decided to give it at least one more shot and go out for spring football. But, the older Thornton brother’s mind was made up and so was his heart.

“I just don’t think I want to do this anymore,” Bruce said to his mom.

Now, here they are, with Bruce a senior and Bryce a junior. Briggans couldn’t be happier with their school and what it has done for each of them, not just now, but what it will do for them once they leave.

“We always wanted a school that would best prepare them for college, and Milton really fit the bill,” Briggans said.

Of course, it has been a pretty good home for allowing them to maximize their potential.

Bruce is 6 foot 2 inches tall and weighs 205 pounds. He could’ve easily stayed with football and likely been great at it, with his build. As great a player as he is, Milton Athletic Director Gary “Sly” Sylvestri said it’s his abilities as a pure teammate that really says all you need to know about Thornton.

“He is humble and unassuming as any player I’ve ever seen,” Sylvestri said.

The Milton athletic director points to a game earlier this season that defined the type of player and person that Bruce Thornton truly is.

“Bruce scored I think, four points. He had a ton of assists, which meant he was giving teammates the chance to make an impact,” Sylvestri said.

As far as Bryce goes, Sylvestri says he saw the junior safety go from a non-starter at the start of his freshman season to a two-way starter in his sophomore season, to one of the best safeties in the state this past year.

“The college offers began to flow in immediately,” Sylvestri said.

It’s obvious that the Thornton brothers inherited great genes from both elite athlete-parents, but Sylvestri says that Briggans has done a tremendous job in raising them.

“The way mom has raised them has made them natural competitors and great teammates,” said Sylvestri. “Bruce is one of the best point guards in the country, but he is just as much of a great young man, and that’s the truth. Bryce is the same way. No different. Two phenomenal student athletes who are among the best at what they do, but great people. That comes from how they were raised.”

When it comes to two brothers so close together in age, separated by just a little over one year, one would think there has been a major sibling rivalry between the two growing up, right? Not at all, says Mom.

“Sure, there was the usual one-on-one basketball games in the backyard, that kind of thing, but that was about it,” Briggans said.

She said the only time there was a problem was when other people began to make comments, comparing one brother to another.

Briggans says that’s when Bryce started feeling resentment towards his older brother. But, as Bryce matured and grew into his own athletic identity, that’s when he changed.

“Bryce started to appreciate his older brother, not resent him,” Briggans said. “He began to realize that being compared to his older brother was a good thing, not a bad thing. They mostly stuck together. They always had each other’s back.”

Speaking of sticking together, the question on everyone’s mind is if Bruce and Bryce Thornton will continue to stick together in college. Bruce has already decided on Ohio State for his collegiate home, so will Bryce follow him to Columbus? Briggans said that’s not likely going to happen.

There’s also the question about the University of Georgia. That’s where both their mom and dad played, so many people assume that at least half of the Bruce and Bryce Thornton duo will become a Georgia Bulldog, right?

“It’s really about what Bryce and Bruce want,” said Briggans. “They both have already visited Georgia and enjoyed the recruiting process involving UGA.”

Dawg fans will certainly be hoping that the Thornton family sports legacy continues in Athens.