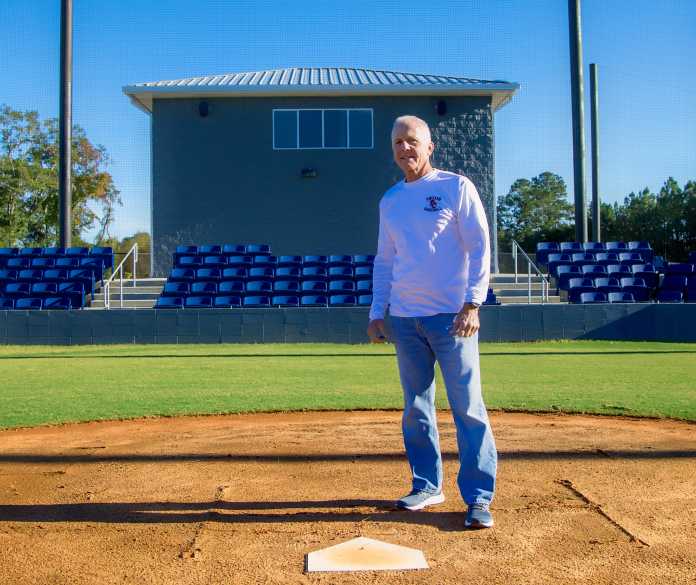 Bart Shuman Returns to the Dugout at Brooks County

When Bart Shuman, the long time coach of the Valdosta Wildcats baseball team stepped off the field in Douglas County in June of 2017, after his Wildcat baseball team had just been eliminated by Alexander High in the GHSA Class 6A Sweet 16.

He had no idea that would be the last game that he would be a part of over the next four years. His career at Valdosta had come to an unexpected end, and the coach was now a “free agent” to borrow from a list of sports-related terms. Anyone that knows Coach Shuman knows that he’s never going to be too far away from a baseball field and involved with youth athletics. He stayed busy working with his 5-Star Valdosta organization, helping out the Lake Laurie 4-13 year old youth recreation baseball and softball programs in their fall and spring leagues, as well as their fall football program. Then, in July of 2021, Shuman finally made his return to coaching varsity baseball, when Brooks County High School came calling. “I had been having some conversations with a few folks involved in the administration side of Brooks County High School,” said Shuman. “That included the principal of the school, Chris Chastain,” said the coach. “He and and I had been talking, and we had discussed the possibility of me taking the job, and they wanted to know if I was interested, and of course, I was,” said Shuman. He said  One of the things that Shuman liked was the commitment that Brooks County had made with regard to the overall athletic facilities, including baseball.  A SPLOST vote had recently passed, allowing Brooks County to add long overdue improvements to its athletic programs. Those improvements would include a brand new football field house, which houses new coaches offices, a new weight room, and locker rooms for home and visiting teams. There is also new football practice fields and a new track that are a part of the new facilities. Then there are the new facilities for softball and baseball, including a brand new field with stadium seating. Also part of the overhaul of the Brooks County athletic facilities was a new 7,000 square foot indoor baseball/softball facility, complete with an arena cage, netting covering the entire indoor of the structure, and 4 batting cages, pitching mounds, and an indoor bullpen. A new tennis complex will be built this next year.  The new sports digs are known as The Brooks County Sports Complex. While Shuman was ready to return to coaching varsity baseball, and Brooks County would have been one of his top choices with or without the new facilities, that fact that he and his players and coaches would have access to some of the finest facilities in south Georgia sure did help. “There were certainly a lot of variables involved that worked in my favor,” said Shuman. The fact that I lived about 25 minutes away from work was nice,” Shuman. He also added that Brooks County was adding a Drivers Education course as part of its curriculum, the same area he taught while at Valdosta High School. “The fact that I could teach Drivers Ed, something I was very familiar with, also went into me decision,” said Shuman. But, the new athletic facilities was, as Shuman admitted, “a huge selling point.” In addition to Chastain, Shuman was quick to point to the other folks at Brooks County High and within the Brooks County Board of Education as having a major influence in his being hired as Brooks County’s new baseball coach. “I want to thank Athletic Director Bucky Perry, as well as Superintendent Vicky Reed and The Brooks County Board of Education,” said Shuman. The new Brooks County baseball coach also wanted to thank “any and all those who supported this beautiful facility,” he said.

Shuman was named new head baseball coach this summer, succeeding Josh Price, who was promoted to an administrative position as an assistant principal within the Brooks County school system. Since being named head baseball coach, Shuman has been hard at work learning the players and working within the allowable ratios of coaches to players as permitted by the GHSA during the offseason. And, how will his new Trojan baseball team look in its first season? “I think we’ll be ok. We need to get our numbers up a little, and build more depth, but it’ll work out” said Shuman. “I’m just excited to be coaching here at Brooks County.”

You can bet Trojan fans are excited to have you, Coach.