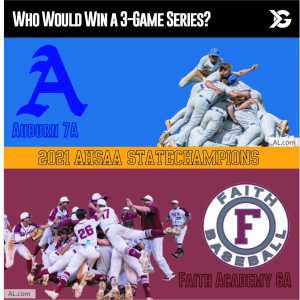 Regarded as two of the best, if not the best, high school baseball teams in Alabama this season, Auburn and Faith Academy ended their 2021 seasons on top as the 7A and 6A state champions. Looking back, if the Tigers and Rams met in a three-game series, who would win?

These two teams met once early-on during the 2021 season, a game in which Faith Academy won 1-0 at home in extra innings. While that game might not have been the highest scoring, these three games would surely be must-see from start to finish.

So, three games on a neutral field between the 7A champs and the 6A champs. Who claims the spot as the best high school baseball team in Alabama for the 2021 season?