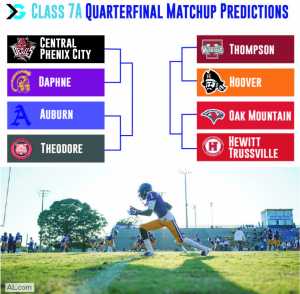 We make our predictions for which teams could end up in the AHSAA Class 7A Elite 8. The 2021 Class 7A playoffs will be dominated by one storyline: Can Thompson complete the first-ever three-peat as 7A state champions?

The two-time defending state champion Warriors will once again be a popular pick to win it all, and rightfully so. They return many notable players that include: Quarterback Conner Harrell, linebacker Jeremiah Alexander, wide receiver Ryan Peppins and more.

Meanwhile, 2020 7A runner-up, Auburn, is entering year one under new head coach Keith Etheredge. And despite losing many notable players, the Tigers have a talented roster headlined by line backer, Powell Gordon.

Teams such as Hoover, Central-Phenix City and Hewitt-Trussville will all once again be a feature in the 7A playoffs, with each returning multiple prominent starters from a year ago.