6-foot-10, 210-pound power forward Jabari Smith has officially committed to Auburn University. The Tyrone, Georgia, native had a total of nine offers and made the tough decision over his final choices: Georgia, Georgia Tech, LSU, North Carolina, and Tennessee.

Smith announced his commitment via Instagram this past Friday.

The Sandy Creek High School athlete will leave a remarkable legacy behind. “From Good to Great” is the school’s motto, and Smith proves to be a model example.

In his 2019-20 season with the Patriots, Smith averaged 24.5 PPG, 10.8 RPG, and 2.8 BPG. He charts significantly higher than the average in each category and proved himself on the court throughout his high school career.

So how does obtaining the No. 1 power forward in the country prepare Auburn for its upcoming season? Smith is a player of range. He has an astounding jump shot, is a reliable rebounder, and isn’t scared to block. He’s grown in height and will continue to come into himself in his college career. Not to mention, he is the highest-ranking recruit Auburn has had since 2007, according to ESPN.

Auburn head coach Bruce Pearl is putting together a masterpiece in the making. Before Pearl’s arrival, Auburn had yet to land a five-star recruit. Smith will be Pearl’s third pick since his arrival in 2014.

When Smith arrives on campus, he will be accompanied by another reigning Georgia native, Sharife Cooper, out of McEachern’s Class of 2020. Cooper committed last September, but will be a strong point guard coming in. Their matchup could be the next great point guard/power forward duo.

Smith spoke highly of the Tigers in an interview with ESPN.

“Their style of play is free and fast,” Smith said. “Auburn is known for their defense. Playing for Coach Pearl will help me become a stronger two-way player. I noticed how much Coach Pearl loves his players.

“A few big factors in my decision were how much he has won at the highest level, competes for championships, and how his players have (gone) to the next level. Hopefully, we can go back to a Final Four and further. It is the best fit for me.”

Smith can pave the road for himself at Auburn and could possibly make it to the NBA. As Auburn’s program has a bright future ahead, it will be exciting to see Smith’s performance as he enters the collegiate level. Pearl’s program could be a good fit, allowing Smith to soar to his full potential as he enters War Eagle territory. 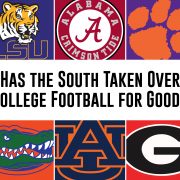 Instagram did not return a 200. Follow Us!
Florida High School Transfer Rule: Good for the Student-Athlete, Bad for the...