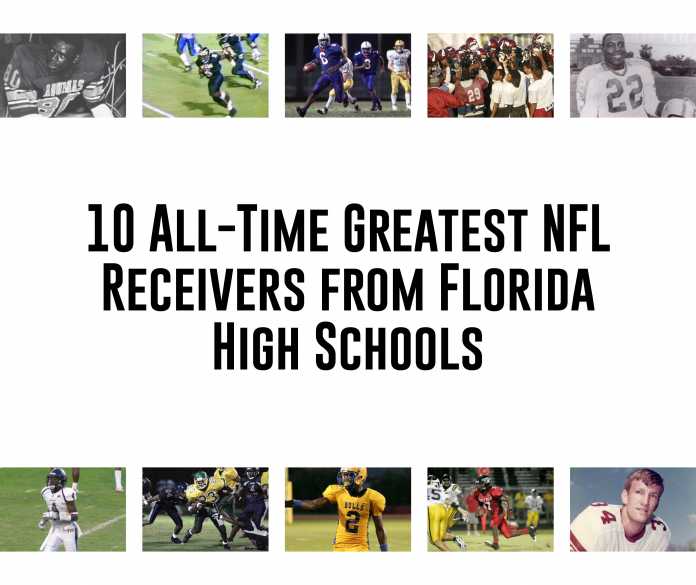 Florida High School football produces some outstanding athletes and is one of the best states for the sport in the nation. Many Florida natives go on the play at the professional level. Here are the top 10 all-time greatest NFL receivers from Florida High Schools.

Hall-of-Famer Michael Irvin is undoubtedly the greatest receiver to ever play for the Dallas Cowboys. He helped them win three Super Bowls and is now a highly respected analyst working for the NFL Network.

Andre Johnson quietly became the best receiver ever for the other NFL team in Texas, the Houston Texans. Despite atrocious quarterback play throughout most of his career, Johnson was one of the league’s premier pass catchers for a decade dating from 2003 to 2013.

Anquon Boldin was one of the most consistent receivers in NFL history. He had a lengthy, durable career and won a Super Bowl in 2013 with a 104-yard performance playing for the Baltimore Ravens.

Antonio Brown could easily top this list if not for his recent mishaps. Brown has arguably been the best receiver in the NFL since 2013. He’s had over 100 receptions for six straight years, one of which he galloped for more than 1,800 yards. He’s an all-time great who’s still in his prime at just 31 years old.

Hayes started his career leading his high school’s football team to an undefeated season with a state title. He then went on to win two Olympic gold medals for track events at the 1964 Olympics. He pursued an NFL career, getting drafted to the Dallas Cowboys, whom he helped win their first Super Bowl in 1972.

T.Y. Hilton is one of the most criminally underrated receivers in the NFL today. He has consistently been one of the top deep threats in the league and has five seasons of over 1,000 yards for the Indianapolis Colts. He’s proven durable and will likely produce several more great seasons at only 30 years old.

Devin Hester is labeled as a wide receiver, but he isn’t on this list because of his position. He’s listed because he’s the greatest return specialist in the history of the NFL. He has 20 career returns for touchdowns. Out of those, 14 are off of punts, five from kickoffs, and one off of a missed field goal. He made a Super Bowl appearance in 2007 with the Chicago Bears, where he returned the game’s initial kickoff for a touchdown.

Amari Cooper has quickly established himself as one the league’s top wideouts since being drafted in 2015. He’s posted four seasons over 1,000 yards in his five-year career. He’s only 26 years old and is heading into the 2020 season on a stacked Dallas Cowboys offense.

Sammy Watkins made a name for himself quickly in the NFL for his spectacular one-handed grabs. He was drafted to the Buffalo Bills in 2014, eventually producing a 1,000-yard season. He’s now on the Kansas City Chiefs, where he just won his first Super Bowl catching five balls for nearly 100 yards.

Ron Sellers ends this list not due to his numbers in the NFL, but due to the impact he had on college football. He played at Florida State University starting in 1967, where he set several school records, including the most 200-yard games, a record he still holds today. He was a two-time All-American and became a first-round draft pick for the Boston Patriots.