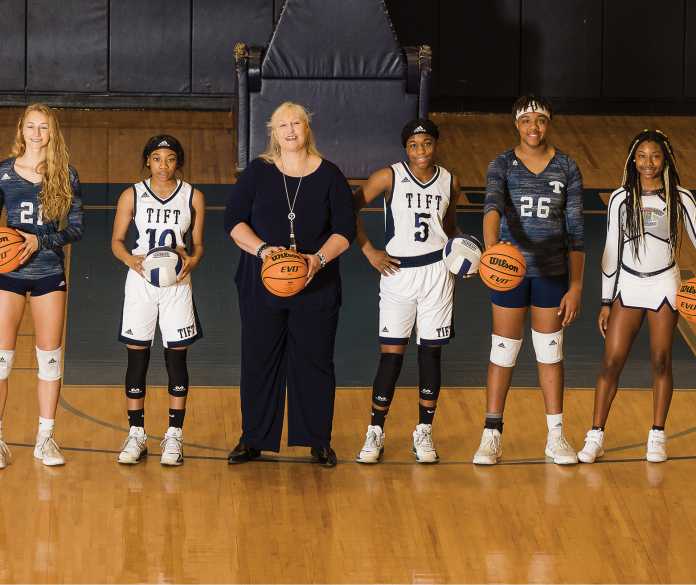 The coach was her father, Johnny Rutland, who also coached at Tift County.

He coached the Blue Devils boys’ basketball team from the fall of 1971 through the spring of 1979.

Her mother, Freida, was a four-year starter for the Lowndes High Vikettes basketball team in the mid 1960’s, helping lead Lowndes to the final four of the state playoffs in 1965.

Julie herself was a standout player at Tift County.

She played for the Lady Devils from 1985- 1988, and despite the team not performing very well during her time there, it wasn’t because of Julie’s efforts.

Her efforts attracted the attention of college coaches, including Division 2 Georgia College and State University (the current Georgia College), who gave Julie a partial scholarship to attend and play basketball for the Lady Bobcats in Milledgeville.

Her first experience in coaching would actually come during her freshman season at Georgia College.

Julie broke her pinky finger during one of her first practices, which forced her to take a redshirt, meaning she would not be able to see any action as a player.

But, Bobcats head coach John Carrick knew Julie could help the team, so he allowed her to act as an assistant coach of sorts, and video the team.

“I was glad that I could still help the team in some way, but I really missed playing. I had been looking forward to it,” Julie said.

Jordyn Dorsey Voted ITG Next March Athlete of the Month