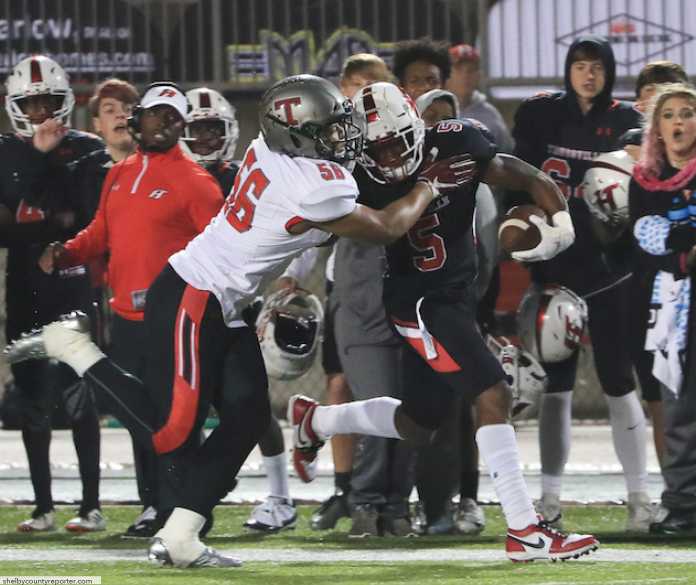 The Top 5 Alabama Class of 2023 Recruits

While the recruiting rankings for the Class of 2023 are still in the works, the state of Alabama is well represented early on. Alabama currently has five 5-star prospects in the Class of 2023 according to 247Sports, each of whom are ranked among the Top 30 players nationally. Here is a little more in-depth look at those five players.

Leading the group is 5-star DT from Thompson, Peter Woods. Woods is currently rated as the No.2 player in the country in the Class of 2023 by 247Sports, and currently has interest from numerous schools including Alabama, Auburn, Florida, Florida State, Michigan and Ole Miss. Woods was injured for a majority of his 2020 sophomore season, but still managed to amass 30 tackles, eight TFL and 3.5 sacks to pair with his freshman season when he had 54 tackles, 15 TFL, and seven sacks for the back-to-back 7A state champion Warriors.

Carver-Montgomery DT James Smith comes in at No.2 in the state, and is not too far behind Woods either. Smith, a 5-star, is rated as the No.6 player in the country according to 247Sports, and is capable of playing multiple positions along the defensive line. Smith was a standout on the Carver-Montgomery defense in 2020, helping lead them to an appearance in the 6A playoffs, and has interest from numerous schools.

Alabama has two top DTs, but also some top CBs as well with Thompson’s Tony Mitchell leading the way. Mitchell is rated as a 5-star prospect, a Top 15 national player and one of the top consensus cornerbacks in the Class of 2023. Mitchell is a versatile DB capable of playing multiple positions in the secondary, but is at his best at CB. Mitchell amassed 82 tackles, eight TFL, eight PBUs and four INTs during the 2020 season for the 7A state champion Warriors where he was selected to the First-Team All-State team at the DB position as a sophomore. Mitchell has interest from multiple schools, most notably Alabama and Florida State.

The next top CB from Alabama in the Class of 2023 is Glenwood’s AJ Harris. Harris is a 5-star prospect rated among the Top 30 players nationally, as well as one of the Top 5 CBs in the country in the Class of 2023. Harris played multiple positions for the Gators during the 2020 season, leading them to the AISA 3A state championship game, while also being selected to the AISA Second-Team All-State team. Harris has interest from numerous schools including Alabama, Florida State and Ohio State.

The last current 5-star prospect in Alabama for the Class of 2023 is Florence CB Jahlil Hurley. Hurley is rated among the Top 30 players nationally, as well as one of the Top 5 CBs in the country. Hurley was selected to the 7A Second-Team All-State at the DB position during the 2020 season as a sophomore, and has interest from multiple top college programs.