Central-Phenix City claims the top spot to end the season after defeating Hewitt-Trussville in three games to capture the Class 7A state championship, while 6A champion Hartselle finishes not far behind at No. 2. Class 4A champion Mobile Christian also finishes the season ranked within the top five, along with 5A champion Russellville seeing a rise up to No. 6.

With the Alabama High School Baseball state semifinal round set to take place later this week, four teams enter the week squarely in the conversation for No. 1 overall.

Class 6A’s Hartselle takes over the top ranking in this week’s update, while Central-Phenix City, Auburn and Hewitt-Trussville are not far behind, and the Red Devils and Tigers play each other this week in one of the state’s most compelling semifinal matchups. A number of new teams enter the Top 25 this week, as there are only four teams left playing in each classification, with Class 5A’s Headland leading that group as the highest ranked.

With the 2022 Alabama high school baseball playoffs having officially begun, here is the latest update for our 3A-1A Top 25 rankings.

Continuing what has been an impressive season, Class 3A’s Piedmont takes over the top spot this week, with previous No. 1 Pike Liberal Arts falling to No. 3. AISA 3A’s Glenwood takes a notable rise up to No. 2 this week, with the Gators and Patriots having split the head-to-head this season at a game apiece.

Four new teams also entered the Top 25 this week; that group is headlined by 3A’s Plainview at No. 20 overall.

As we approach the 2022 Alabama high school baseball playoffs, the 7A-4A Top 25 receives an update full of movement from top to bottom, with every team changing at least one spot aside from No. 1 Auburn.

The Tigers continue to hold a slim lead over 7A’s Hewitt-Trussville for the top spot, while teams such as Saraland, Gulf Shores, and Wetumpka all saw notable rises into the Top 15. As for the multiple teams that entered the rankings this week, Class 7A’s Prattville sees the most notable ranking of the seven, with the Lions sitting at No. 9. 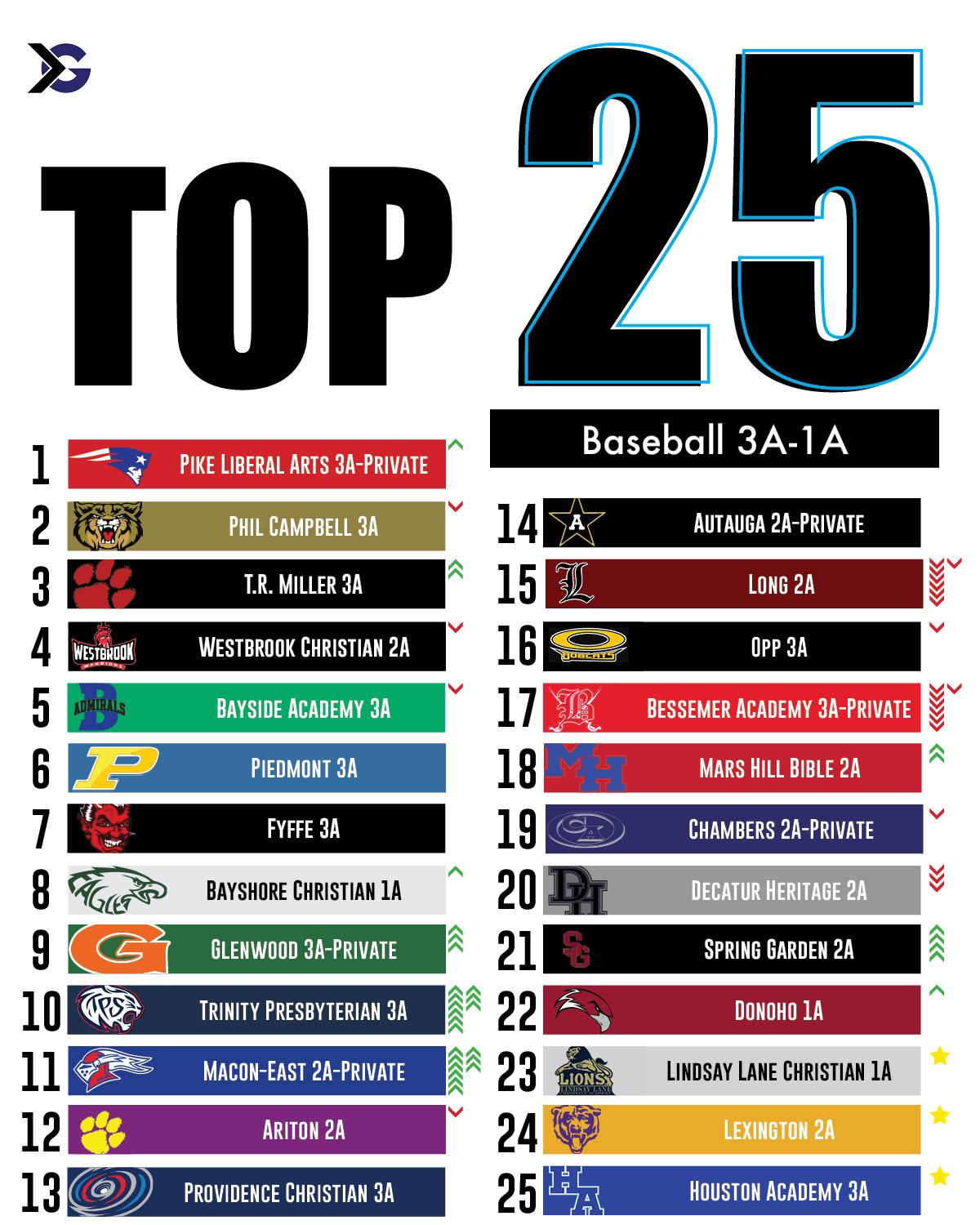 The 2022 Alabama High School Baseball season is now officially in full swing with our 3A-1A Top 25 rankings receiving the first update of the year.

AISA 3A’s Pike Liberal Arts claims the new No. 1 overall rankings after an impressive start to the 2022 season, while previously top ranked Phil Campbell does not fall very far. Teams such as Trinity Presbyterian, Macon-East, and Glenwood all saw notable rises this week, while three teams also entered the top 25 after strong starts, a group featuring 1A’s Lindsay Lane Christian at No. 23, as well as 2A’s Lexington and 3A’s Houston Academy. 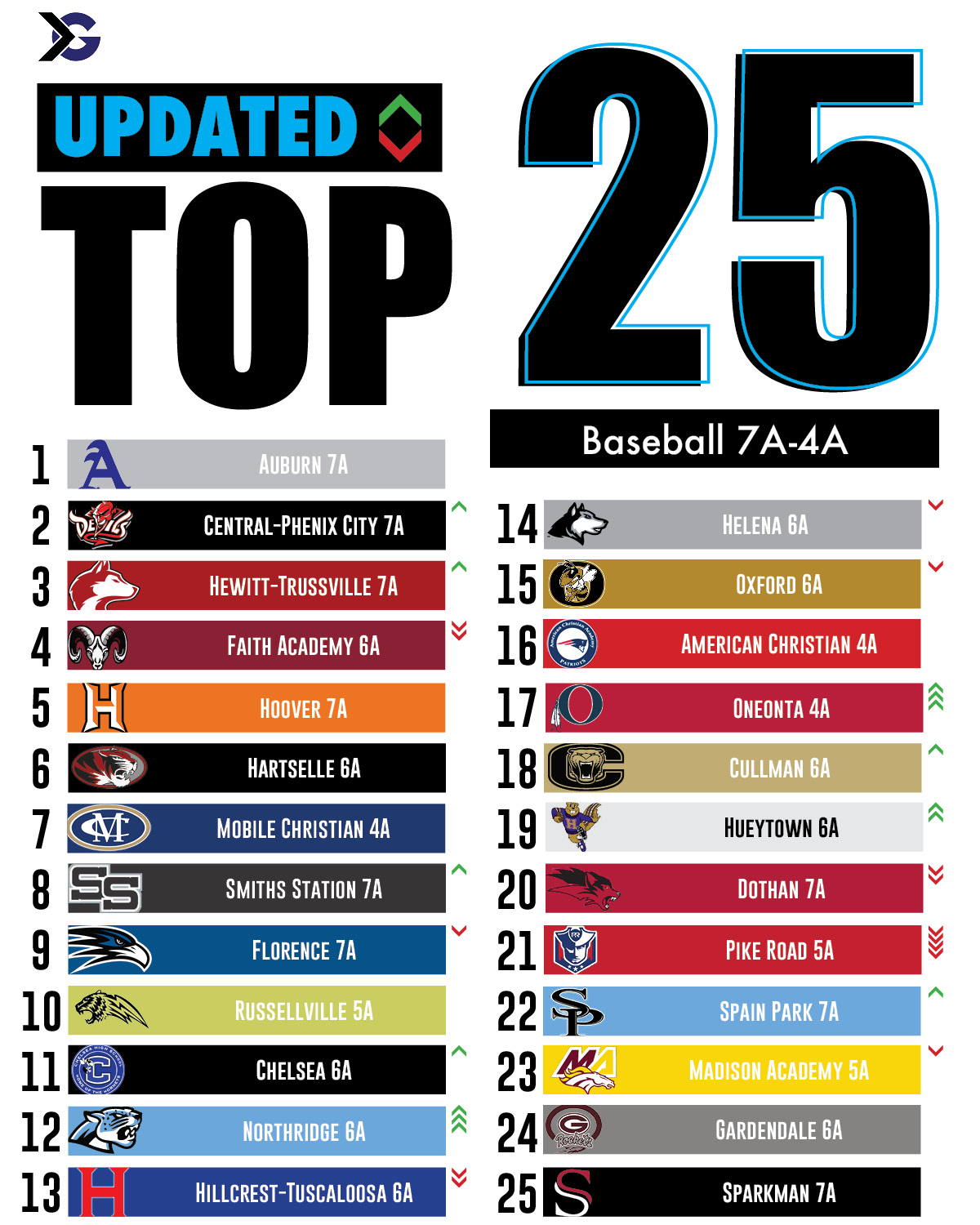 Despite the 2022 Alabama High School Baseball season only beginning, there have been a notable number of games played. With this, our 7A-4A Top 25 rankings receive their first update of the season.

Despite no new teams entering the rankings this week, there are a few notable teams such as Mortimer Jordan and Vestavia Hills currently sitting just outside the top 25, as well as a few others. Teams such as Northridge and Oneonta took noticeable jumps this week after strong starts to the season, while teams such as Pike Road, Hillcrest-Tuscaloosa, Dothan, and Faith Academy all saw small drops. 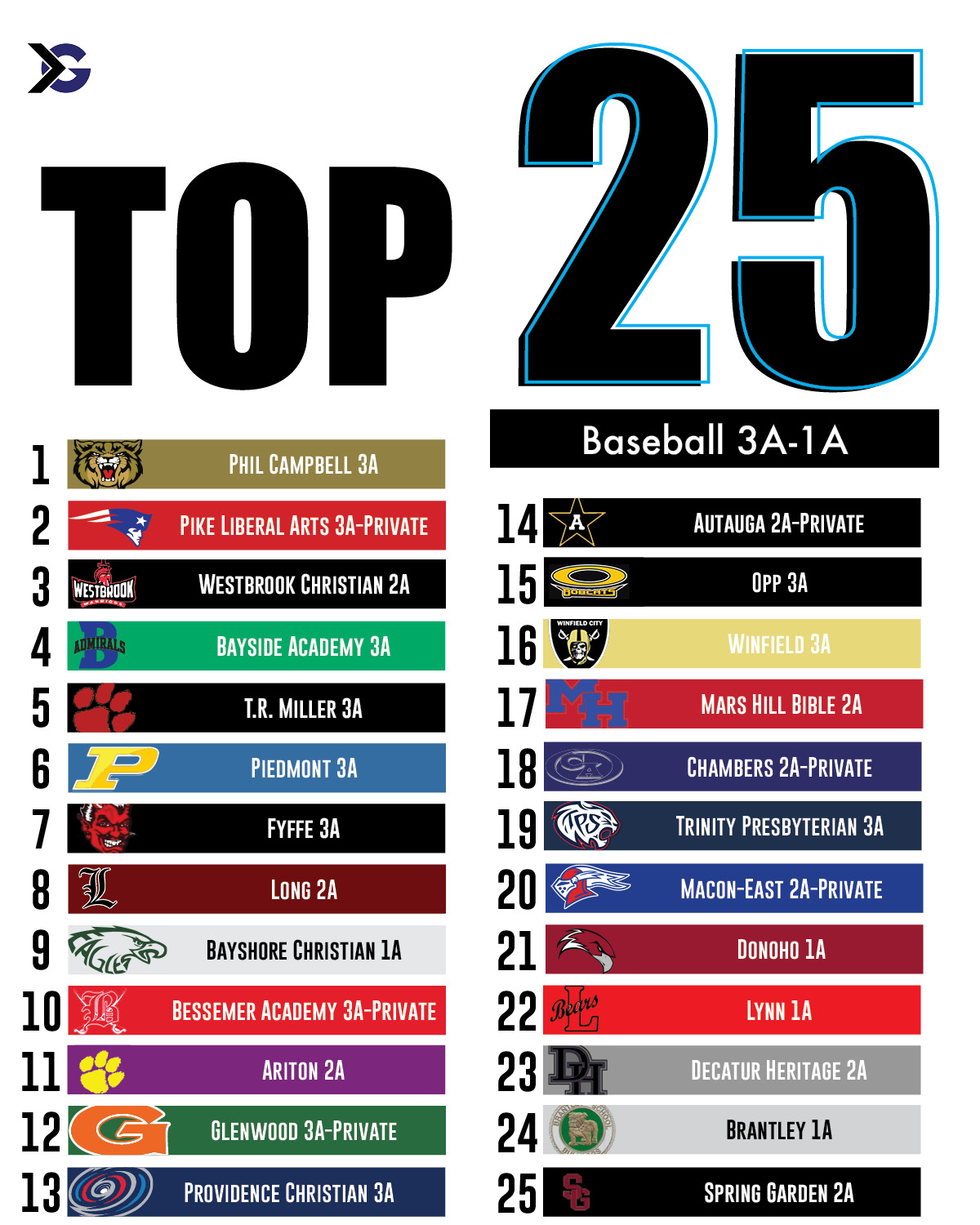 As we approach the first pitch of the 2022 Alabama High School Baseball season, here are our preseason Top 25 rankings for Classes 3A-1A.

Will these rankings look similar to this or different two weeks from now?

With the 2022 Alabama High School Baseball season set to begin in the coming weeks, here are our Preseason Top 25 rankings for Classes 7A-4A.