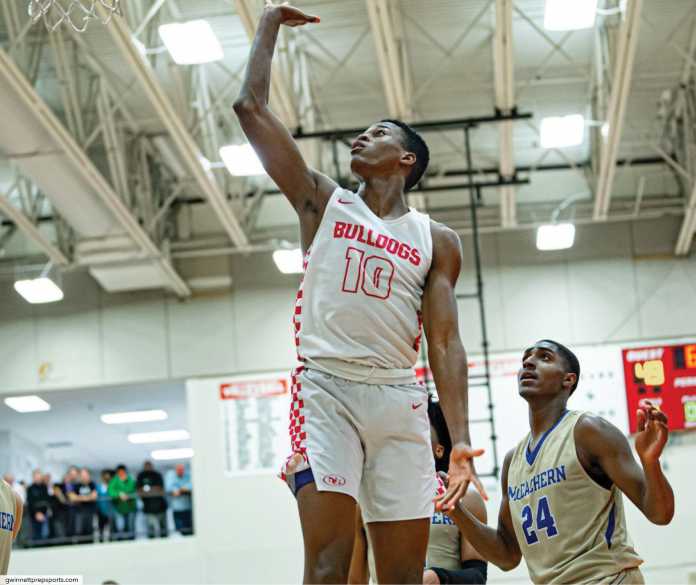 McEachern at North Gwinnett: A Game for the Ages

First, let’s set the scene: This was a quarterfinals matchup between the visiting McEachern Indians (21-5) and the hosts, the North Gwinnett Bulldogs (18-11).

The Indians, led by star point guard Sharife Cooper, arrived at this game having won eight straight after a loss to Montverde Academy, the consensus No. 1 team nationwide.

North Gwinnett, on the other hand, began their season 1-5 and entered their region tournament as a 4-seed. In shocking fashion, they won their semifinals and finals games by a combined 67 points to clinch a region championship. Their first two playoff games were both overtime thrillers against teams that had better records.

Now, North Gwinnett and McEachern would face off in a David and Goliath matchup with huge implications.

There was no shortage of fans at the game, as the North Gwinnett student section occupied one whole side of the gym, while the McEachern faithful filled the other side.

It seemed as if the ultimate underdog story would be written early, as the Bulldogs outscored the Indians 27-14 halfway through the second quarter. However, a 9-0 run just before halftime kept the game within reach for McEachern as they still trailed 32-27.

After the intermission, McEachern picked up where they left off, scoring 5 more points in succession to take their first lead since the score read 6-4. Both teams traded scores throughout the third quarter and played to a 47-47 tie at the fourth-quarter break.

The game seemed to be out of hand for McEachern once again as they trailed by 5 with just over two minutes left in regulation, but a clutch 3-pointer by Israel Palmer tied the game at 65 with 1:23 left.

After trading several empty possessions, the game came down to a McEachern inbound with 9.9 seconds left. The ball was put in the hands of five-star Auburn commit Cooper, who worked past a couple Bulldogs defenders and drove into the lane. Cooper’s layup rolled off his fingers and toward the basket, but North Gwinnett’s Jared Ivey swatted the shot away with just one second left, sending the crowd into a frenzy. In what would only be considered fitting, this game would be headed to overtime.

Despite the promise of more action, the overtime period proved to be much less satisfying, as McEachern easily pulled away with a 10-3 run to win 75-68 and advance.

The Indians went on to lose to Grayson in the semifinals while North Gwinnett, just two seasons removed from a 3-22 record, refueled for next season.

Regardless of the outcome, it is easy to consider this one of the greatest games of all time, not just for the storylines, but also for the play.