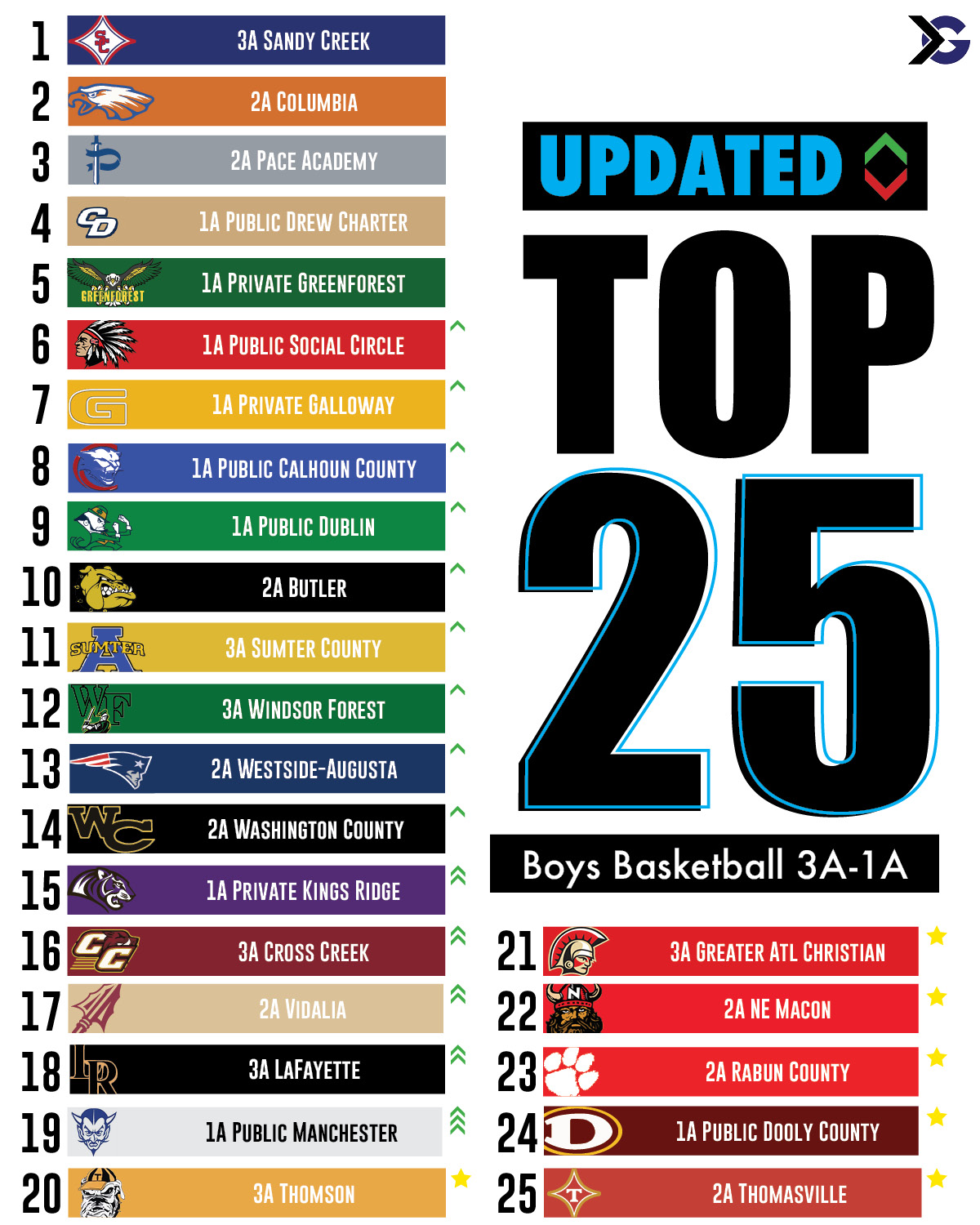 Our updated ranking saw six ranked teams defeated in the first round of the state tournaments last week. The most surprising upset was the No.6 ranked Salem, who lost to White County, the No.2 seed from region 7-2A. If White can knock off Beach in the second round, they will find themselves in the top 25. Meanwhile, Lanier County lost to Dooly County, while Darlington, Turner County, Mount Pisgah, and Christian Heritage will all get ready for next year. The top half of the rankings remains the same, with Salem the only team out of the top 15 that lost. ITG Next Georgia welcomes Thomson, GAC, NE Macon, Rabun County, Dooly County, and Thomasville to the ranking this week. Will they stay? Check back next time! 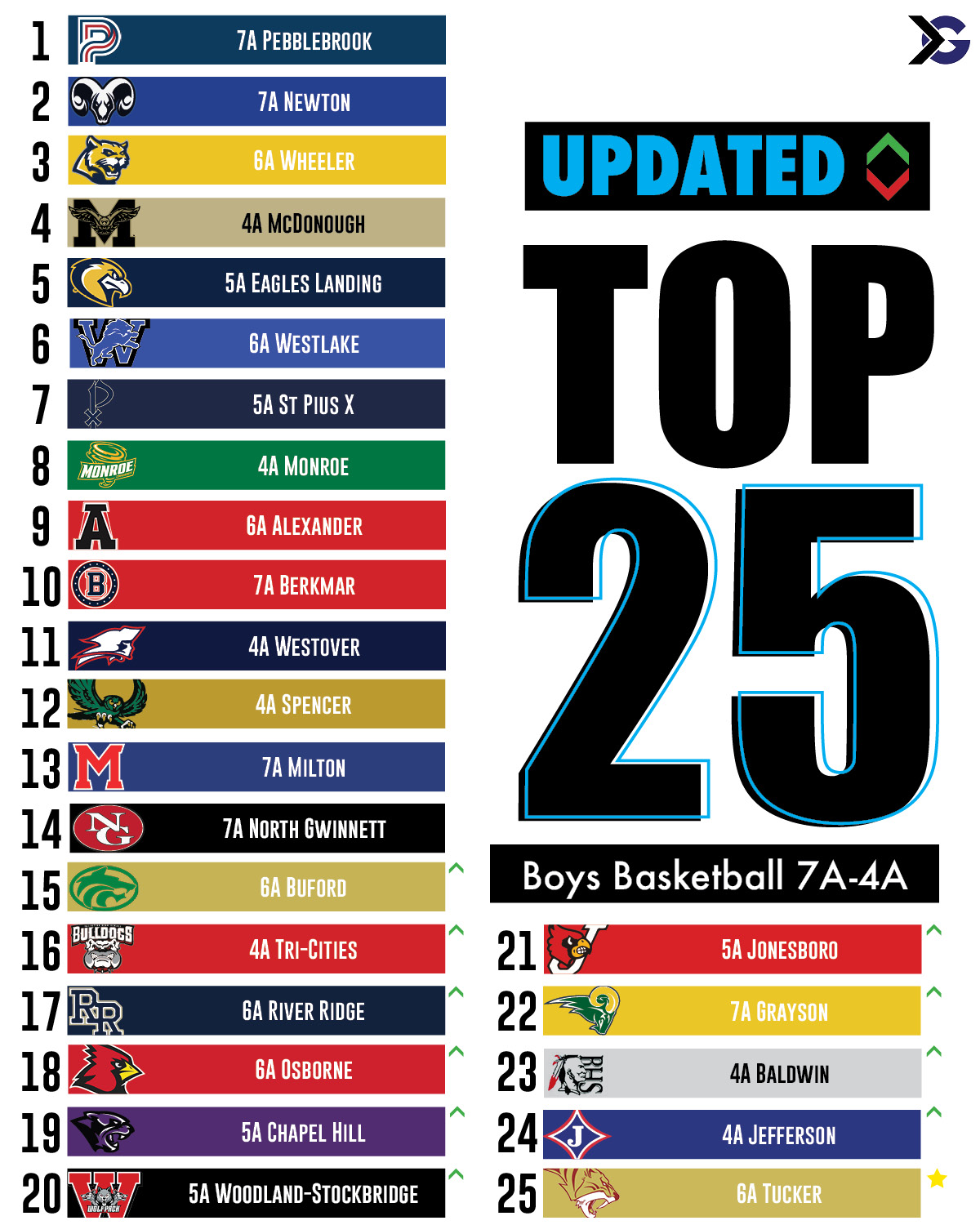 Our updated 4A-7A rankings remain exactly the same, except for one team. Salem, previously ranked at No.6, lost to Osborne in a shocker in the opening round of the state playoffs. The remaining 24 teams all won, and remain where they are. Pebblebrook, Newton, and Wheeler all stay in the top three for now, although Wheeler will play sixth ranked Westlake in the second round, so we know the top 10 will look much different by the next ranking. Tucker moves into the top 25 this week. 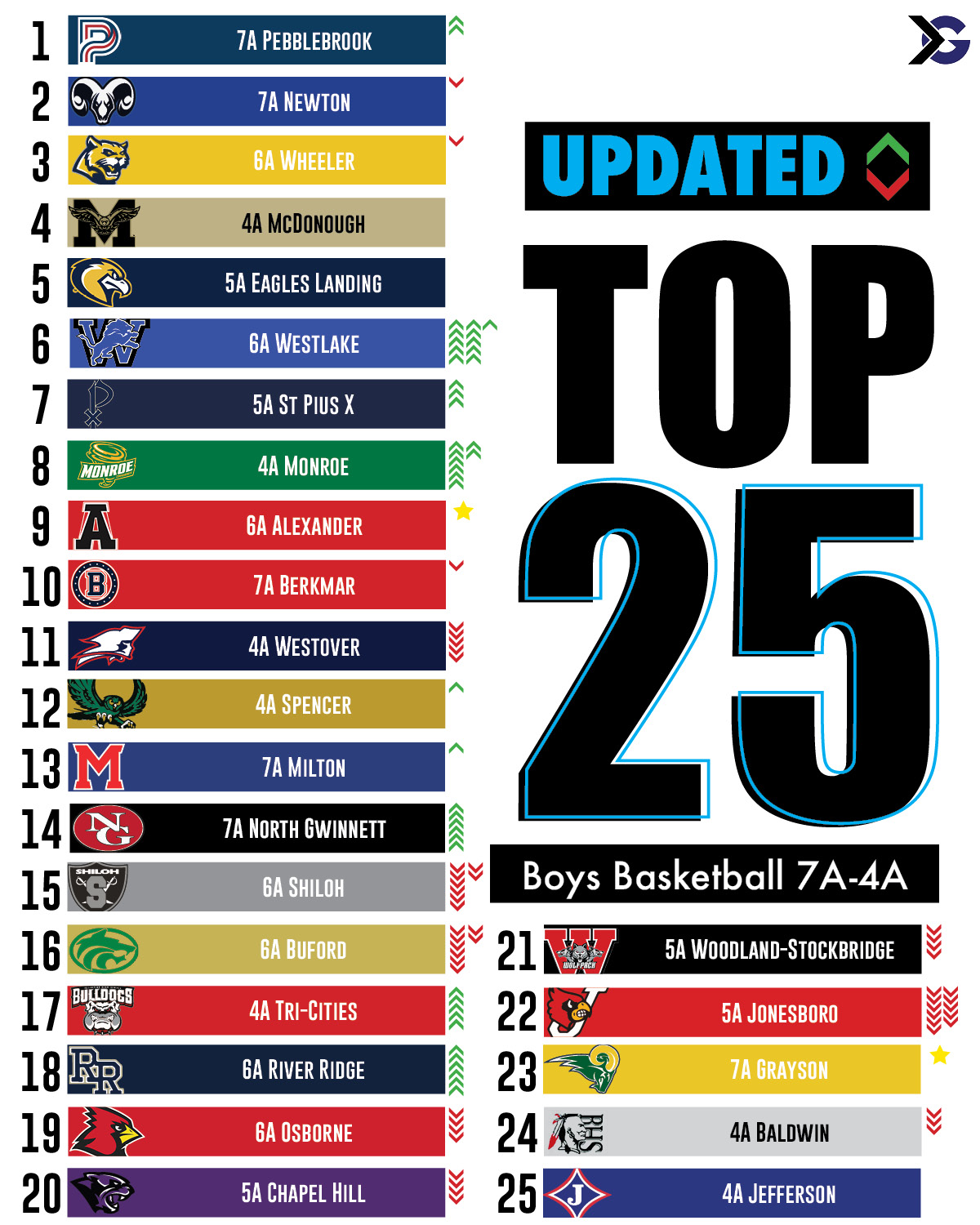 We have had some changes in our most recent 4A-7A Georgia boys basketball ranking, with a few teams not moving from their same position from our last poll. This week sees the top three teams move around, as Pebblebrook jumps into the No.1 spot, Newton at No.2, and Wheeler at No.3. McDonough and Eagles Landing are the only two teams to not move from our last update, as they remain  at No.4 and No.5,  respectively. Westlake makes the biggest jump within the poll, moving from No.19 to the No.6 spot, while the hardest working team to earn their way in after not being ranked two weeks ago is 6A Alexander, entering the poll at No.9. 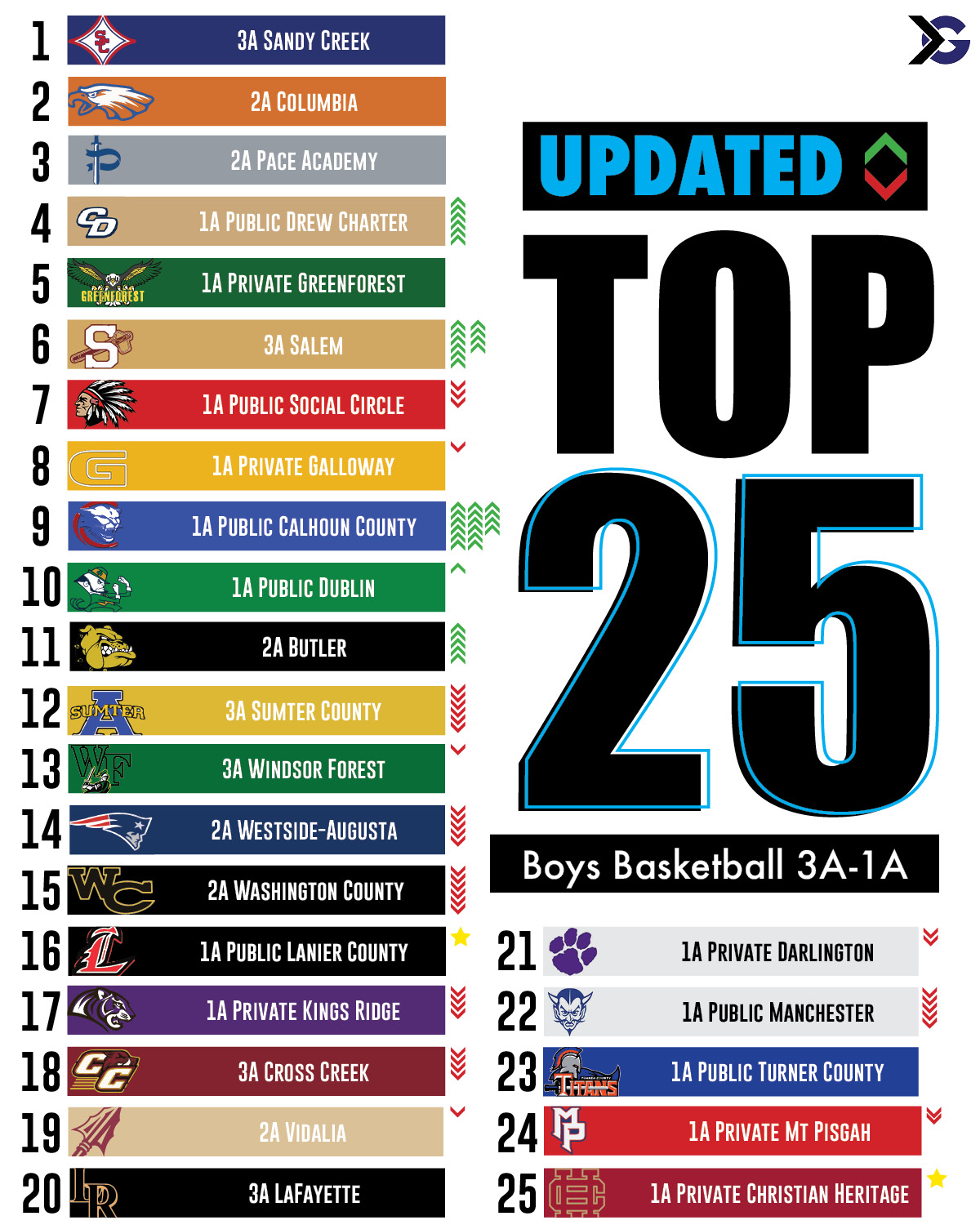 As the Georgia high school basketball season heads into the final week of the regular season and teams prepare for region tournaments, ITG Next Georgia gives you our updated rankings of the 1A-3A classifications. Our top three teams remained in their same spot as two weeks ago, but after that, we saw teams bounce around like an over- inflated basketball. Calhoun County was our highest climber, jumping from the No.22 spot two weeks ago into the top 10 at No.9. Drew Charter moved up from No.10 to N0.4, while Salem moved into the top 10 at No.6. Newcomers Darlington and Christian Heritage, two Class A private schools, move into the top 25 this week. Look for some changes as team’s head into region tournament play before our next update. 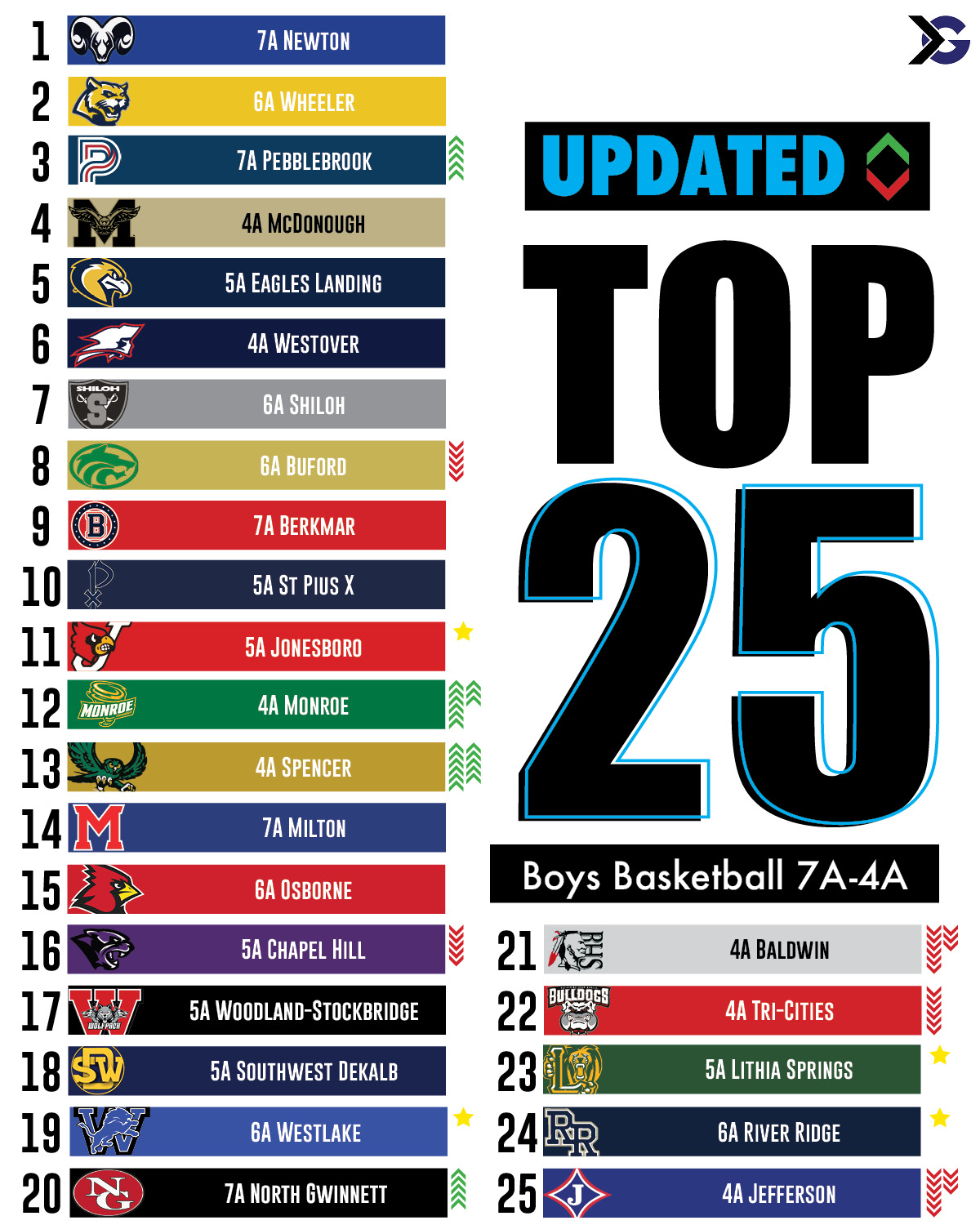 Our updated poll for the higher classifications see a few changes from our last top 25 poll. While Newton and Wheeler remain atop the poll as the top 2 teams, Pebblebrook becomes the #3 team, formerly occupied by Buford. The wolves fall to #8, allowing Pebblebrook to climb into the top 5. Monroe climbs in the polls to number 12, while Spencer High takes the honor of making our biggest jump this week, going from #24 to the 13th spot this week. We had 4 schools rewarded for their stellar play, making the top 25 for the first time. Those teams are Jonesboro, Westlake, Lithia Springs, and River Ridge. The final week of the regular season is upon us, and now the playoffs will start to separate the contenders from the pretenders. How will it impact our polls? Check back next week! 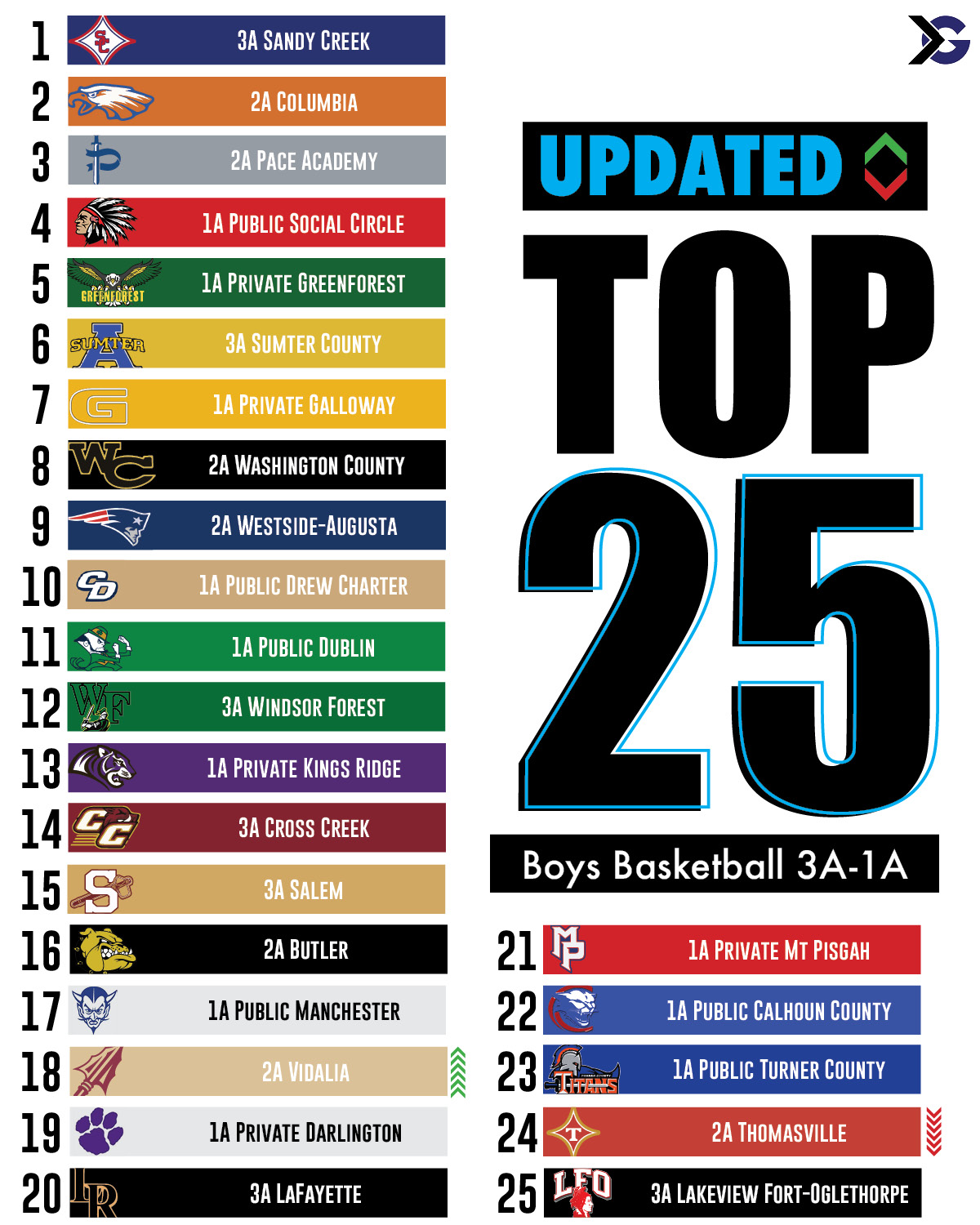 Our updated ranking of the 1A through 3A classifications yield few changes from the first week’s rankings. Sandy Creek remains the top team, with a couple of 2A teams holding on to the 2nd and 3rd positions. Our most notable changes on the poll occurs at the #19 spot, as Lanier County make their debut into the 2nd top 25 polls. The Bulldogs are playing well, and really caught our attention this past week. 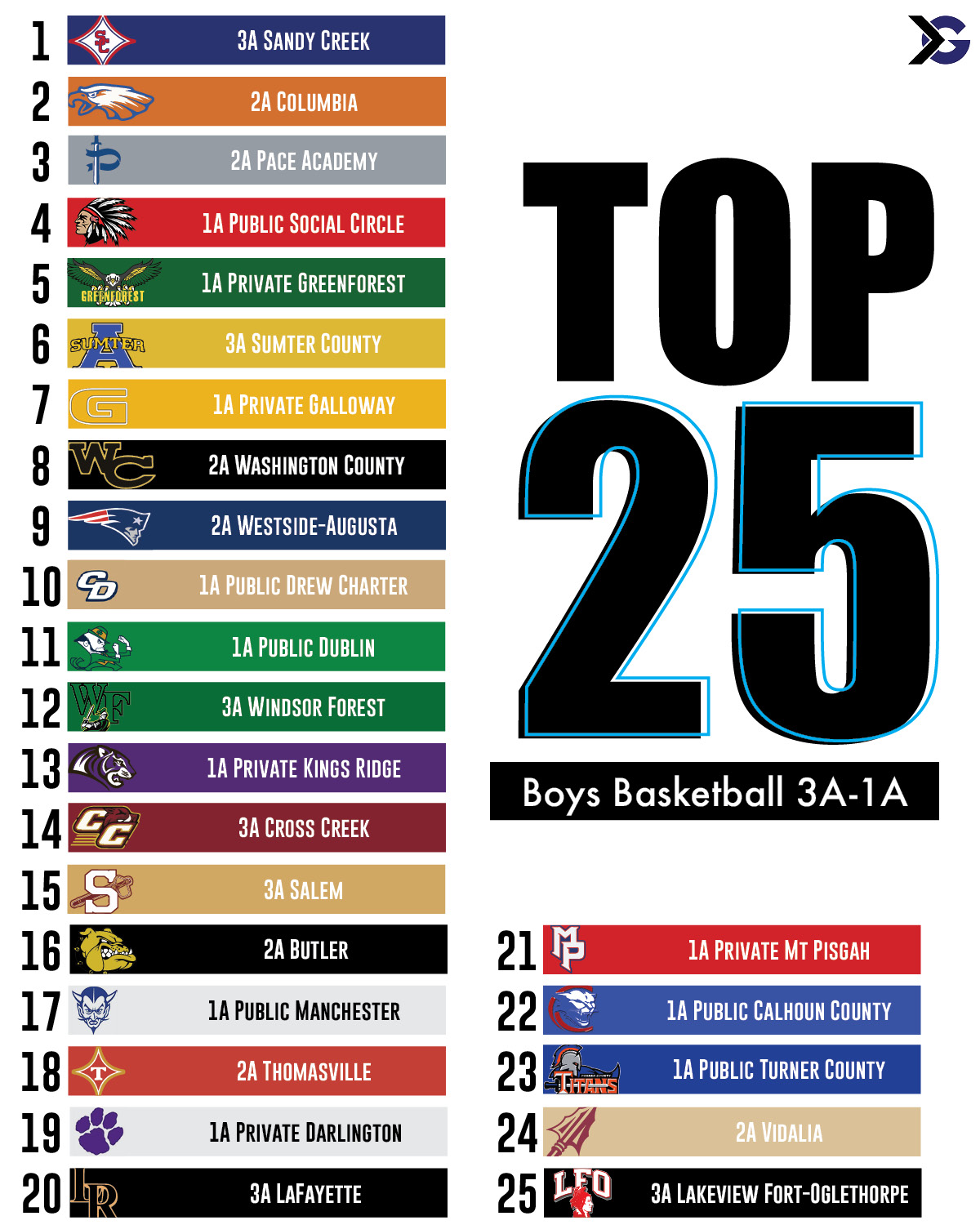 To start off the new year, powerhouse Sandy Creek sits at No.1 for the first ITG Next Georgia Boys Basketball Top 25 as they come off an impressive 23 point win over 4A Fayette County, 66-43. They will have to avoid near upsets like the one that almost occurred in their game with unranked Cedar Grove if they want to hang on to their No.1 spot. Sandy Creek was able to escape with a 3-point win, but things aren’t going to get any easier as region play is now in full swing. Watch out for two 2A top contenders, Columbia and Pace Academy, each of whom had strong showings in their respective holiday tournaments. 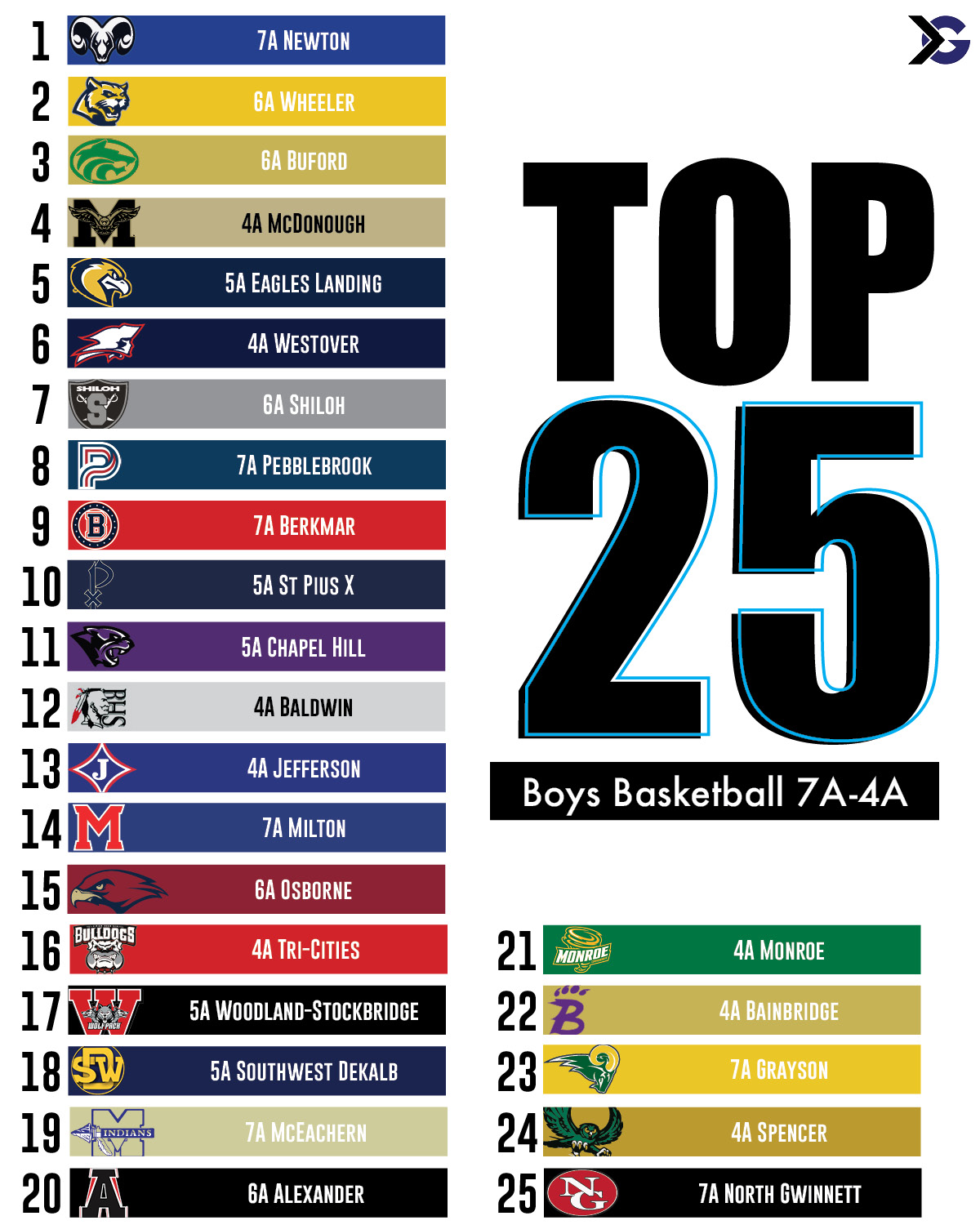 The first ITG Next Georgia Boys Basketball Top 25 of 2022 starts off with Newton as No.1. The Rams are coming off an impressive holiday tournament showing, winning the Sugar Bowl Classic, sweeping all four games, including the title game over Texas boys power Beaumont United by 13 points, 67-54. A team to watch out for is our current sixth ranked Westover Patriots, who are still undefeated on the season. Traditional power Wheeler is always hanging around the top and is currently ranked No.2. My pick as the team that could climb in the rank is Grayson, who enjoyed an impressive showing during their holiday tournament, including an 8-point win over 3A Windsor Forest, ranked at No.12 for 1A-3A.