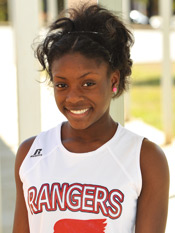 It’s almost impossible for Thalia Sutherland to keep a straight face. The 14-year-old seems to have a perpetual smile which often leads to laughter.

“I’m kind of silly and I like to talk. I’m pretty happy most of the time,” she says.

Just about the only time Sutherland isn’t smiling is when she is focused on her speed as a member of the Veterans Memorial Middle School track and field team. The eighth-grader is heading into her third season of running track in middle school. A self-described sprinter, the 5’2” athlete captured the Muscogee County City Championship last year in the 200-meter event and helped lead the VMMS team to the highest overall finish in the school’s history. This time around, Sutherland is looking for a little justice.

Sutherland says her favorite event is the 400-meter race. She has participated in just about every track event except the mile and 800 meter. Last year at the city-wide middle school championship, Sutherland had planned on running in the 400m but a clerical error kept her from competing. 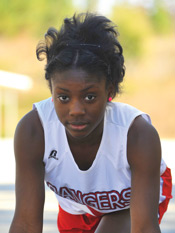 “My name got mixed up with someone else’s and I wasn’t listed so I didn’t get to run it. I was disappointed but it was okay. I am just looking forward to it this year,” says Sutherland.

Many middle school track athletes start off participating in other sports then gravitate to track and field. Sutherland chose to run track at the urging of her mother in the sixth grade, while attending Fort Middle School. Up until then, Sutherland had done a little cheering and dabbled with gymnastics for a bit but had not really played organized sports.

Her early days as a track athlete were a learning experience. She was placed on the B team at Fort and also participated on the school’s relay teams. Looking back, she feels that opportunity allowed her to pick up the basics of running track.

“One of the hardest things for me to learn was not to look back when reaching for the baton,” she says laughing. “I also watched the girls on the A team and saw what worked for them.” 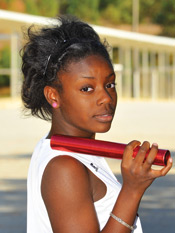 The summer following her sixth grade year, Sutherland became involved in the track program of the local American Amateur Union (AAU). She stayed with it and today is a member of the AAU’s Georgia Jackets and has traveled extensively while competing against track athletes from all over the country.

“The main difference between middle school track and AAU is that with AAU I am up against girls from a lot of other places who have been running track for a long time. It’s more competition and more pressure,” says Sutherland.

When Sutherland transferred to VMMS for her seventh-grade year, there was no doubt she would go out for the Rangers track and field team. Last year she competed in a variety of events which included the 4x100m relay, the 4x400m relay, the 200m, and of course, her favorite, the 400 meter.

Rangers track coach Chad Dean expects Sutherland to run the same events this season with the possibility of adding a few 100m races. Dean, who is in his seventh season coaching at VMMS, has plans for Sutherland to take a leadership role on the team and to improve her time. 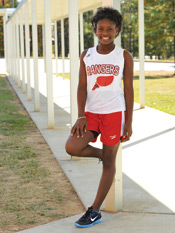 “Thalia will have to be one of our leaders again this year as we are expecting to have a young team. I am hoping that her work ethic will push others to do well,” he says. “I think her best event is the 400m. Her natural ability is probably best displayed in this event. Last year (her time) was around 58-59 seconds, and for a seventh-grader, that is phenomenal! I am expecting that number to come down this season.”

When asked to assess her strengths Sutherland quickly responds that she is a “good floater.” She can make up time on the back side of the race but she has a goal this season of working toward becoming faster right off the starting block so that she doesn’t have to worry about making up time.

Her speed and running ability caught the attention of the VMMS girls soccer coach Andrew Oropeza, who asked Sutherland to join his team this past fall. Sutherland recalls her experience as a first-timer on the soccer field.

“I wasn’t very good. I only scored one goal and I had a hard time learning to dribble the ball with my feet,” she says, putting her hand over her mouth as she laughs. 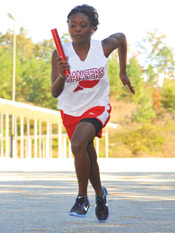 Sutherland gets serious for a moment when she discusses the reason track seems to suit her. The petite, well-spoken student athlete admits she has a very competitive nature which is compounded by the fact that she allows her emotions sometimes to get the best of her. Running, she says, helps even out her personality and gives her an avenue to release the tensions that otherwise build up.

She has already decided to attend Shaw High School next year with hopes of running track. She cites the school’s established track program as the main reason for her decision.  For now Sutherland is looking no further than track season and a chance to finally run the 400-meter race in the city-wide meet. After that she hopes to advance her goals to include running one day as an Olympic track athlete. Between now and that future dream, she knows she has at least one other thing to overcome.

“I get so nervous right before a meet. I mean really nervous. I know I need to work on that because I am just worried about some fast girl coming out of nowhere to beat me,” she says, then starts laughing at herself.

Getting to know Thalia 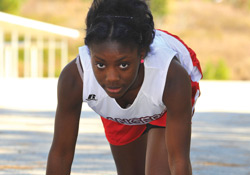 Family: Mother, Petra Sutherland; Father, Mark Harry; two brothers and two sisters
Favorite food: Cheeseburgers
Best place to eat: McDonald’s
Favorite music: Hip hop, R&B
Favorite movie: Abraham Lincoln: Vampire Hunter
Person she would most like to meet: Sanya Richards-Ross
Pre-game ritual: I pray before each meet
Person she looks up to: AAU coach, Mitchell Deering
Something people would be surprised to know about her: I like to sing and write songs
Favorite subject at school: Language arts
Best thing about Veterans Memorial Middle School: My grades have improved because teachers care, and, everyone gets along well together

Trading in Her Cleats

Joining the Movement: Over 10,000 Play for Florida Elite